This was a very relevant factor, as one of my early conclusions was that the presence or absence of children was of high importance for the consumer behaviour.

Around 40% of LGBT indicated to be single, as opposed to 29% of heteros.

The duration of the relationship was an average of around 10 years, while gays are somewhat underrepresented in the categories 16 years and longer.

An important question related to having children or not: 18% of gays and lesbian listed to be parents, as opposed to 72% of the heteros. “Not yet” was given as an answer by respectively 10% and 8%.

The number of children does not differ very much between the groups. This can also be attributed to the fact that some gays may have started out their adult life in a heterosexual relationship, with children. 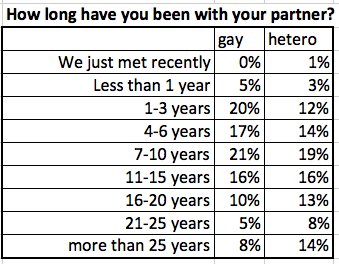