Nike, Inc. is an American multinational corporation that is engaged in the design, development, manufacturing, and worldwide marketing and sales of footwear, apparel, equipment, accessories, and services. The company is headquartered near Beaverton, Oregon. It is the world's largest supplier of athletic shoes and apparel. As of 2020, it employed 76,700 people worldwide.

The company was founded in 1964, as "Blue Ribbon Sports", by Bill Bowerman and Phil Knight, and officially became Nike, Inc. in 1971. The company takes its name from Nike, the Greek goddess of victory.

In addition to manufacturing sportswear and equipment, the company operates retail stores under the Niketown name. Nike sponsors many high-profile athletes and sports teams around the world, with the highly recognized trademarks of "Just Do It" and the Swoosh logo.

Nike has consistently received a 100% score from the Human Rights Campaign for the past 18 years.

The ad made an impact. POZ founder Sean Strub said: “The ad sent a signal. First of all, a signal to people with HIV - which I think is the most important one - by showing someone with HIV who is out there and doing and accomplishing and leading a life while managing this illness. But it also sent a broader signal about recognizing the humanity and the survival and the full lives of people with HIV- not just defining us as a virus.”

After the publication of Kaepernick as the new face of Nike’s Just Do It campaign, Natalia Mehlman Petrzela, a history professor at The New School in New York City said: "This is totally part of this tradition of moving the needle with kind of controversial branding that places sports and athletics in the context of something bigger." Petrzela said Nike’s tradition of socially-conscious branding goes back all the way to the ’70s.

"When they released their first women’s running line, they name the shoes after kind of all these quasi-feminist sayings. There’s 'The Liberator,' " she explains. "Today it all seems kind of cheesy, like, 'Big deal. Women’s empowerment branding.' But back then, you just didn’t have a lot of that." Nike has since run ads featuring Paralympians, runners who are overweight — or in their 80s.

In May 2019 Nike unveiled the new BETRUE collection, recognizing the 50-year anniversary of the Stonewall uprising, with its new Air Max 720 trainers. For the first time, the annual collection includes the original eight-color Pride Flag designed by Gilbert Baker. As part of its ‘Be True’ range, the shoes feature a rainbow gradient that goes from pink, red and orange through to blue and purple with the brand’s signature Swooshes in black on both sides. They also have a black tongue with bubble-effect, translucent midsoles that have Baker’s signature printed on the outer edge. The 2019 BETRUE campaign supported 20 LGBT+ charities.

With the introduction of the original BE TRUE campaign in 1985, some of the most storied programs in collegiate hoops finally had the footwear that allowed athletes and fans to show their school colors. BE TRUE 2012 celebrated the achievements of the New York City, San Francisco and Portland communities as progressive leaders of LGBT life with city-specific footwear releases and accompanying hat and tee.

BETRUE started in 2012 as a grassroots effort led by Nike employees in the PRIDE Network seeking to build a community diverse in orientation, identity and expression focused on community initiatives to advance equality in sport.

The collection, which is created and managed by Nike designers in the LGBT+ community and Nike’s PRIDE Network, releases each year in June to celebrate National Pride month and supports all individuals regardless of gender identity or who they love.

Nike is supporting 20 organizations to advance the LGBT+ community through grants administered by the Charities Aid Foundation of America, and donated $3.6 million since 2012 (plus $1 million from Converse).

For the 2020 (gender neutral) lineup, the brand gave three sneakers new looks that celebrate the “pursuit of equality for all athletes.” The Nike Air Force 1 (which is being included in a BeTrue line for the first time), which was “created as a reflection of performance art” and features design cues that are an homage “to underground ballroom culture, the Nike Air Max 2090, which uses its colors to celebrate unity in times of uncertainty and the Nike Air Deschutz, which shows that sport means something different to everyone.

Specifically featured on the Air Force 1 is a 10-color rainbow mark on the heel that the brand said is inspired by the More Color, More Pride* flag. According to Nike, it adds a black and a brown stripe to the traditional colors of the flag to recognize people of color in the LGBT+ community.

The storytelling as a whole, according to Nike, “paints a picture of a community recognizing its inner strength, leading the way forward and standing together to make a future where we can all Be True.”

Some of the nonprofits who received grants last year included the LGBT Center of Los Angeles, Portland Frontrunners, GLBT Historical Society Museum, Campus Pride and You Can Play.

You can't stop us

This clip is a brilliant piece of editing, of sewing together a split screen of various sport footage. It is a display of diversity. 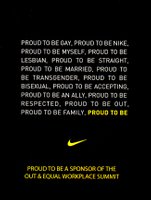 In 2007, Nike sponsored the Out & Equal Work Summit, with a Proud To be campaign.

The images used in their 2008 campaign seemed like intimate male to male encounters, but were not aimed at a gay audience per se. However, they did get in trouble for the ads for its Hyperdunk basketball shoes, amid criticism that these were homophobic. It showed the phenomena that some slam-dunking can bring a players crotch into the face-space of another player. To this they added the headlines "That ain't right", "Isn’t that cute", and "Punks jump up." Nike pulled the ads and issued this apology, even though clearly no offense was intended.

As part of their continuing BETRUE campaign for 2019, Nike released a short film called "Nobody Wins Alone" that reaffirms their support of the community while sending a clear message - nobody can truly win if the rules aren’t the same for everyone. The film stars Chris Mosier, Sue Bird, Brittney Griner, Elissa Steamer, Caster Semenya, and others.

In 2016, Nike starred their first transgender athlete. A short film celebrated the extraordinary athlete, Chris Mosier, and his unlimited determination and spirit to become the first openly trans athlete to earn a spot on a U.S. men's national team. It was part of Nike’s “Unlimited” campaign launched during the Rio Olympics.

Long before their Colin Kaepernick NFL flag-kneeling ad in 2018, Nike ran a groundbreaking and empowering spot that featured the legendary “Just do it” slogan and marathon runner Ric Muñoz who had HIV. It challenged the way people thought about the stigma of the virus.

"We're never alone, and that is our strength," says a narrator. "Because when we're doubted, we'll play as one. When we're held back, we'll go farther, and harder. If we're not taken seriously, we'll prove that wrong. And if we don't fit the sport, we'll change the sport." Then a man is seen on a skateboard carrying a torch burning rainbow colored smoke. 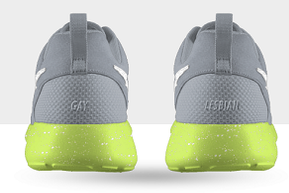 Nike By You (launched in 1999 as "NikeiD") is a service provided by Nike allowing customers to customize clothing and footwear purchased from Nike. The service - unlike a similar one by adidas - allows users to write the words “gay” and “lesbian”, but blocks words such as “faggot”. NB: The word “bisexual” was blocked by Nike iD, because there was a six-character limit on words for Nike iD. You would think this would also rule out "lesbian"...?

The collaboration with Mosier was extended with "Breaking Barriers Through Sport", which gave attention to

The Chris Mosier Project. Raising visibility, he says, is a key part of the fight for equality: “Change can’t happen without us — we have to be at the table. I was a face to say, ‘This is wrong.’ ”

A 10-minute documentary from filmmaker Alex Huebsch, made in partnership with a Nike Pride grant in 2019, sheds a spotlight on the trailblazing athlete’s story, how he achieved his dreams and goals.

In the summer of 2021, Nike launched their new campaign: "Play New". During the 2021 European Championship football they released a clip that shows a plethora of diversity, with the apparent intention to show that football is all-inclusive. At 0:32 we see two men kissing passionately, with the voice-over saying "Be with whoever you want". The video got more than 33 million views: many comments on their YouTube channel criticized Nike for their work in sweat shops. Remarkably, there are more dislikes than likes: this hardly ever happens.

In the latest addition to its “Play New” campaign, Nike introduced soccer player Mara Gomez, who is the first trans woman to play in Argentina’s professional league. Gomez, 22, began playing the sport only at 15. She started playing for the country’s women’s league in December 2020. In the ad, Gomez is seen practicing her soccer skills, working out, laughing, and flexing for the camera.

The ad also features her discussing the impact the sport has had on her life. “Today I’m the first professional transgender player in Argentina,” she says. “And it was not easy, because I didn’t have a role model to follow. So it’s my turn to open the door for the athletes to come.”

Late 2021 Megan Rapinoe announced her latest Nike project: A 360 MEGAN x NIKE partnership that began with her own Nike logo, adding a psychedelic V, as in, Victory Redefined, to the famous swoosh. Rapinoe is no stranger to taking victory off the field. Witness her continued advocacy for LGBT+ youth and trans athletes, the knees taken in honor of #BlackLivesMatter, and the surprise chat with Alice on The L Word: Generation Q. In this project she curated some of her favorite pieces from the brand’s Fall line and she’s also slated to co-create a collection with Nike designers in 2023. 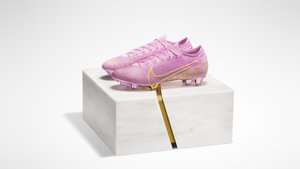 In recognition of Megan Rapinoe’s most recent accolade, and in a year of massive achievements, Nike presented commemorative boots made specially for her. The pink and gold colorway draws inspiration from Rapinoe’s signature hair color and the trophies she has won. Her first and last name appear prominently on the lateral sides of the boot, with “Just Do It’ on the medial side. The heel counter and sockliner carry the four stars Rapinoe and her American teammates proudly sport on their national team jerseys.

Rapinoe also featured in Nike’s powerful message “Dream With Us”, that featured the U.S. Women’s National Team and their influence on young athletes ahead of the World Cup in France. The “Dream With Us” ad shows amateur and professional athletes alike gathering at a stadium tunnel as Alex Morgan, Megan Rapinoe, Mallory Pugh, and the rest of the U.S. Women’s Team prepare to head out onto the pitch, with the narration from Academy Award-winning actress Viola Davis asking “What’s your dream?”

"Inspiring the next generation is how New Victors are made." Sue Bird and her partner Megan Rapinoe have defined greatness and longevity in their respective sports, but their legacy project goes far beyond their careers. Through sports, Sue and Megan also found their voice and a platform to advocate for more representation, visibility and investment in women's sports.