Budweiser is an American-style pale lager produced by Anheuser-Busch (AB InBev). It was introduced in 1876 by German-born Adolphus Busch and his friend Carl Conrad as a "Bohemian-style" lager, inspired after a trip to Bohemia. It has become one of the largest-selling beers in the United States.

In the mid-1990s the industry started to pull away from its longterm sexist advertising themes that objectified women. Looking for new material to mine, brewers began extensively playing with gay and transgender themes in their advertising. However, because beer drinkers are stereotypically macho, the tone of many of the ads were often negative. Budweiser has used visual puns on the suggestive shape of its long-necked bottle, and used suggestive slogans like "nice package." But increasingly, gays were looking for more serious messages of solidarity, expecting companies to support them by sponsoring gay community events or backing gay-friendly workplace policies.

Bud Light's history of LGBT-inclusive advertising began in 1995 with a print ad. That same year, Anheuser-Busch and its local wholesalers also pledged to donate a portion of all Bud Light sales to support AIDS-related non-profit organizations in local communities.

Bud Light released a limited-edition rainbow coloured aluminium bottle to raise funds for GLAAD to celebrate World Pride in New York. The bottles were available in bars across the US during the month of June, and Bud Light donated $1 to GLAAD for each case sold, up to $150,000.

In January 2016, Vice President of Bud Light Alex Lambrecht announced that the brand was making radical changes to its strategy to reflect the way consumers and society are changing. "If we want to remain as relevant … we have to move with the times," he said. The marketing strategies behind Bud Light and its older brother Budweiser are moving in very different directions. While the liberal Bud Light toasts diversity, Budweiser is playing on a rise on nationalistic fervor by temporarily renaming itself "America." 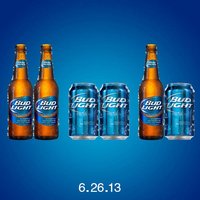 The date on this Facebook ad of June 26, 2013, refers to when the U.S. Supreme Court issued an historic decision for federal marriage equality, striking down the Defense of Marriage Act preventing same-sex couples from forming legal unions. The image shows a metaphoric pairings of different and same pairings of bottles and cans and happens to have a remarkable similarity to the Diageo Smirnoff vodka ad the same day.

Bud Light used the "Be Yourself" theme since 1998 for a number of years, with images such as a Bud Light bottle decked out in rainbow beads, sunglasses and a stovepipe hat. In early 1996, the company began running a campaign with the line, "Labels belong on beer, not people," in national gay magazines and has had a presence ever since. The ad was among few that depict a touching gay couple and was the first one from Anheuser-Busch.

In 2003 popular gay illustrator Joe Phillips illustrated the campaign showing people at parties. This version, in black & white with spot color on ways people express themselves, highlights things such as a tattoo, purple hair, a stylish watch,cell phone, and sneakers. One of the scenes showed two women together, which does not show up often in gay-targeted ads. Some of the male versions had an almost "Tom of Finland" look. 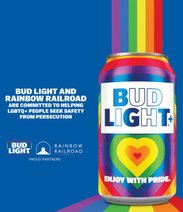 As an official sponsor of Toronto Pride, Bud Light Canada partnered with Rainbow Railroad in 2019 to launch a limited-edition rainbow can. These cans also featured an adjusted brand logo to highlight the letters LGBT (Bud LiGhT) with an added +. Bud Light donated $1.45 to Rainbow Railroad for every case purchased, up to $100,000.

Founded in 2006, Rainbow Railroad is a Canadian-based, human rights organization that supports LGBT+ people at risk around the world, which helps people flee state-sanctioned persecution and find pathways to safety with emergency travel support. 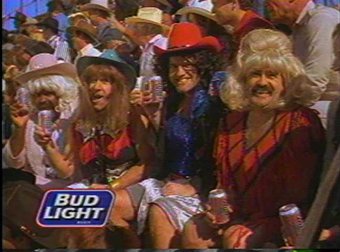 Even before Bud started to talk to their gay consumers, they ran the first of at least four commercials with drag queens, starting with Ladies Night in 1993. AdRespect: "This Budweiser ad isn't meant to parody transvestites or gays. Rather, it plays on the Mrs. Doubtfire/Tootsie joke of obvious men dressing as women out of need - it's a joke older than television. The campaign has been so successful it ran for many years and carried variations that included comedian Don Rickles (1997) mistakenly picking one of them up." However, that one was considered a bit more offensive, because you have people wincing at the presence of men in drag.

Other clips were Pool Table (1995) and Volleyball (1996). In a similar theme, Ladies Night In, we see an effeminate gay snapping HEY at his girlfriends. This was less respectful than the 'good clean fun' of the rest of the Ladies Nights. 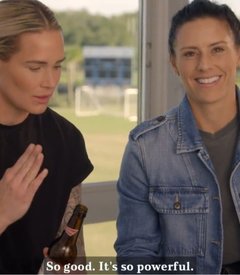 Bud has made appearances during the Super Bowl a number of times, with an LGBT-inclusive message. In 2016 it was the transgencer inclusive "Party" video, in 2020 they made "Typical American". With a short teaser they introduced the commercial featuring i.a. Ali Krieger & Ashlyn Harris, World Cup champions and members of the U.S. women’s national soccer team who recently married each other.

"America, look beyond the labels. You might be surprised by what you find. For this year's Super Bowl LIV commercial, Budweiser is showcasing the extraordinary people that represent the best of America. This Bud's For You." 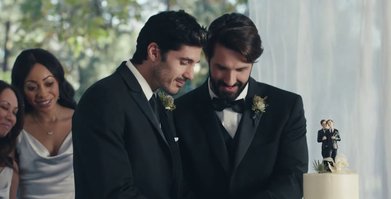 An important statement was made by Bud to kick off Pride Month 2016, when they released the clip Bud Light Party where two men are getting married. "Gay weddings, they're just like any wedding," actor Seth Rogen says after we see a gay couple cutting a wedding cake. Rogen, along with Amy Schumer, then runs through wedding cliches like: "cringe-worthy speeches," "the girl who's super ready to settle down," and "cake." It ends with Rogen declaring: "Bud Light proudly supports everyone's right to marry whoever they want." The spot was promoted by Ellen DeGeneres, who was paid to share the video to her millions of followers on Twitter, Facebook, YouTube, and Instagram. She said: "Looks like there's another party I'd vote for". Remarkably, it only has less than half a million views even after four years, while regular posts by Ellen generate millions.

A second important message was sent with the 2016 Super Bowl commercial. In a continuation of the "Bud Light Party" campaign in the election year 2016 Rogan and Shumer announce that the party is for everyone: men, women, and "people of alllll genders." Amy adds, "But, you know, gender identity is really a spectrum. And we don't need these labels." Seth follows: "Beer should have labels, NOT people." This clip was considered to be a pro-transgender ad. The Advocate: "It's not the first advertisement to address gender identity — that was from Absolut vodka — but it's a big shift from the transphobic beer commercials that we've seen before." 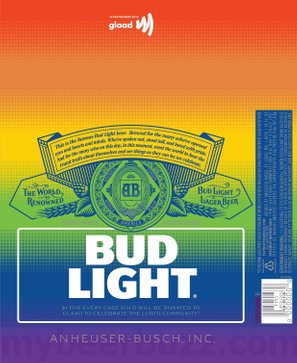 In 1998, Budweiser started a collaboration with GLAAD, that still continues today. "Bud Light has long been a staunch supporter of the LGBT community," said Sarah Kate Ellis, GLAAD President & CEO.

"Bud Light stood with the community at a time when many brands did not, and their continued outspoken support sets the bar for other global brands," said Zeke Stokes, GLAAD's chief programs officer.

"Bud Light has been a supporter of the LGBTQ+ community since the 80s and we are excited to continue our long-standing partnership with GLAAD by collaborating with them on this new commemorative bottle that celebrates the LGBTQ+ community and everything GLAAD does to support it," said Andy Goeler, Vice President of Marketing for Bud Light. 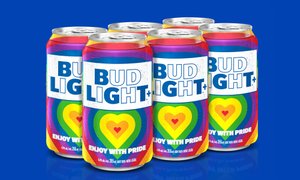 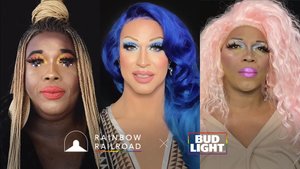 The partnership was continued in 2020 (including the return of the rainbow cans), when protests against anti-Black racism across the globe saw many within the LGBT+ community holding signs that proclaimed “the first Pride was a riot”. It was to remind us that the queer rights movement exists, in part, due to the efforts of Black trans activists in the 1960s. The convergence with the Black Lives Matter movement is one reason Bud Light decided to make it the core messaging behind its new Pride campaign. A touching video was made, featuring the drag queens Jada Shada Hudson, Devine Darlin and RuPaul’s Drag Race finalist Brooks Lynn Hytes, while "de-dragging”.

In addition to the donation to Rainbow Railroad, Bud made a $100,000 donation split between Canadian Black Chamber and Black Legal Action Centre. 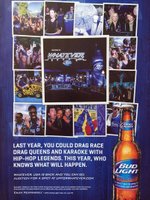 There is an unrelated lager also called Budweiser, originating centuries ago in Czechia; the existence of the two separate beers has given rise to a trademark dispute preventing Anheuser-Busch from using the "Budweiser" name in some regions, leading to the exclusive use of "Bud" in those markets. That nickname is also often 'fondly' used in other markets.

Anheuser-Busch, along with Miller Brewing Co., long had the distinction of being among the few companies that advertised in gay media and also had a mainstream media commercial with a gay theme - long before it became fashionable. 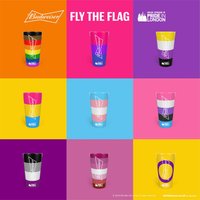 As an official sponsor for London Pride in 2019, Budweiser released a series of limited-edition cups featuring nine flags that “celebrate the diversity within the LGBT+ community”. They also created a microsite budpride.co.uk as "a place to unite fans. Talk about Bud, take part in great giveaways and be first to hear about the world of Budweiser".