Smirnoff (est. 1864) is a brand of vodka owned and produced by the British company Diageo. The Smirnoff brand began with a vodka distillery founded in Moscow by Pyotr Arsenievich Smirnov (1831–1898). It is now distributed in 130 markets and produced in several countries. Smirnoff products include vodka, flavoured vodka, malt beverages and selrtzers. In 2014, Smirnoff was the best selling vodka in the world.

The company has received a perfect 100 percent score on the HRC Corporate Equality Index for over ten consecutive years.

Smirnoff pulled out a number of stops to capitalize on a historic World Pride event in New York City, partnering with influencers from the LGBT+ community to support digital video, experiential and product marketing efforts. The influencers included Laverne Cox, Alyssa Edwards and Jonathan Van Ness.

Love can come in all shapes and forms – and this is what Smirnoff celebrated in 2016, when same-sex marriage was legalized in the UK. Inspired by (and teaming up with) the BOB by Dawn O’Porter fashion label - whose Equality Collection celebrates sexual equality - they created a (very) limited edition range of Smirnoff Vodka bottles. Each of the 500 “Love Wins” bottles was a one-off, and celebrated a unique relationship. With a rainbow colour palette, and using a BOB by DOP print (originally created by illustrator Karen Mabon) as a starting point, they set about creating a diverse range of couples from all walks of life to place proudly on the front of each bottle. The bottles were hand-decorated!

They were available exclusively at The Whisky Exchange during Pride in London 2016, and sales supported the RUComingOut charity.

To kick off the 2019 Holiday Season with fun and mischief, Smirnoff unveiled yet another campaign starring Laverne Cox. It ran across TV, digital and social, and featured Cox charismatically floating through a festive and over-the-top party where Smirnoff steals the show by embracing the unexpected and offering something for everyone (of legal drinking age, of course). The party features Smirnoff in unexpected ways including a festive Holiday tree made of Smirnoff No. 21 green apple martinis, a Smirnoff Kissed Caramel Moscow Mule cocktail hidden underneath a fruitcake, a beautifully wrapped bottle of Smirnoff ICE and a naughty and nice pairing – indulgent Chinese takeout and zero sugar Smirnoff Seltzer Raspberry Rosé.

Smirnoff continued the 'We're Open' project. The campaign, which incorporated a new TV advert and a host of new partnerships (including the LGBT Foundation and LADbible), looked to address the lack of understanding and awareness of the non-binary community and wanted to promote a more inclusive night time culture. Sam Salameh, Head of Smirnoff Europe, said: “We want to give a small minority community a voice, with positive role models. It’s very easy to tell a compelling story and provide lip service to extremely important matters. But if you don’t back that up with some significant action, it becomes a little meaningless.”

In 2017 the brand claimed to have been a supporter of the LGBT community for twenty years, so starting in 1997. There were some gay vague ads as long ago as 1958, but they were likely just meant for fun - because that was an era with no Marketing the Rainbow whatsoever. So the title "Mixed or straight - it leaves you breathless" underneath a picture of two gentlemen might just have referred to the way gents drink their cocktails. The Frankenstein ad does not really makes sense, as scared is changed to scary to rhyme with Mary, a pejorative term for gays. 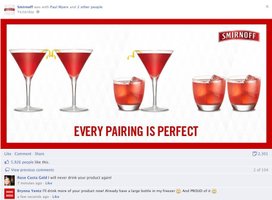 Not many examples of Marketing the Rainbow can befound until

In the battle for marriage equality, Smirnoff chose the right side. Their message was clear: "Every pairing is perfect." Note how the lemon peels are holding hands. But not all Facebook fans loved the message (read comments below the picture) but the positive respones was overwhelming: almost 6,000 likes and 2,400 shares.

The first real print ad aimed at gays that I could find dates from 2001, and is called "Harnesses. Empresses. Fetishes."

Two years later, they made a commercial for the Super Bowl. A very expensive adventure, which they carefully designed. It was about a woman named Alex meeting a blind date at a bar. She accidentally introduces herself to the wrong fellow, and when the right guy shows up, he is classless with his Corvette license plate bearing his name, "The Brad." Her face falls, so the first guy moves in to save her by intercepting him and introducing himself as Alex - Brad flees. 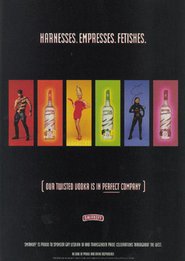 Tracey Mason, who headed up Diageo's gay marketing efforts, commented, "We wanted to make sure that the message we were sending was the right one. That message, which resonated well with gay consumers in the numerous gay focus groups we staged prior to release and as per the comments on your site, was intended to demonstrate how a smart, quick thinking man would have no issue being perceived as gay - at all - but especially by a guy like 'Brad'. We are, in essence, poking fun at Brad's 'jerkiness' and the self-perceived ultra cool/macho/narcissistic persona he embodies. These things, including fleeing the bar when faced with a male blind date, are all the things that a guy like that would do and, conversely, all the things our 'hero' would oppose.

The brand launched a £4.5m ‘We’re Open’ campaign, starting with a series of out-of-home advertising, continued with presence at festivals and by sponsoring the Pride in London after party. Julie Bramham, marketing director for Smirnoff, said the ‘We’re Open’ campaign embraced the brand’s democratic and inclusive character and moved people to be more inclusive. One of the commercials used was "Voguing" (defined as “taking the music, presenting your story and bringing it to the person”).

In 2016 the Mexican Yolanda was presented. She changed the drag performance scene in Mexico and is known for expressing the idea that beauty can be found in ugliness and authenticity. "Yolanda is profound and at the same time very amusing, she invites us to reflect on the stereotypes that exist in society in a striking and energetically new way. Her disruptive look is part of her inclusive discourse."

In 2017 Smirnoff came up with a creative way to combat abuse against members of the LGBT+ community online by responding to trolls with personalised illustrations. To mark Pride Month, the brand teamed up with a collective of socially engaged artists and illustrators for its #ChooseLove campaign. They used social monitoring tools to identify LGBT+ Twitter users who received abuse based on their sexual orientation or gender identity. Offensive tweets were highlighted by a taskforce of artists who responded to hateful messages with illustrations themed around love.

A selection of the artwork created as part of the campaign was shown at an exhibition ahead of the Pride in London Parade. ​The artists involved included digital artist Matt Lyon, freelance illustrator Marylou Faure, Brazilian multimedia artist Lucas Levitan, as well as Becca Human, Chaz Hutton and Ricardo Bessa.

To support British Pride 2017, and off the back of last year’s successful Love Wins limited edition bottles, Smirnoff challenged their agency to come up with a new way to celebrate love. The 2017 design was inspired by illustrator Rob Bailey. He agreed to collaborate with them on this project. After deciding upon a series of 6 bottles – one in each colour of the Pride flag – 6 new sets of embracing couples were created, carefully crafted to represent national diversity and inclusivity - an idea that is central to the Smirnoff brand - and there are hidden details, such as tattoos and jewellery, to discover on each bottle.

A new and rather exciting addition was the bespoke "Snapchat ghost", proudly waving a rainbow Pride flag on the side of every bottle. Snap the ghost and you’d unlock an exclusive Pride lens, allowing you and your friends to capture and share your own Pride celebrations on Snapchat.

The campaign was a finalist at the 20th FAB Awards: it won the FAB Choice award, and a silver medal for packaging design.

Laverne Cox had a big dance hit with "Welcome Home", created specifically by the world renowned DJ/producer Eric Kupper. Cox: “For every time that my ‘Welcome Home’ song is streamed online or downloaded, Smirnoff will donate the royalty proceeds to Transgender Law Center in the organization’s continued fight for equality.”

Smirnoff Red, White and Berry was scheduled to return (after a limited release in 2016) in April 2020. To kick off the launch, they originally shot an ad campaign in February, which focused on celebrating the outdoors with friends and family during the warmer months. However, in the wake of the coronavirus pandemic, Smirnoff said the initial concept “was not the message the world needed right now”. They then reimagined the whole campaign to encourage consumers to stay connected with their loves ones virtually “at a time when Americans need it most”: the new Hang Out from Home for America campaign featured long-time Smirnoff spokeswoman Laverne Cox, as well as new brand partners Dave Bautista, Diane Guerrero, and Meghan Rapinoe. There are also short clips with "inner monologue" and one called "Don't drink and debate" - a pun on "Don't drink and drive" in combination with the American elections.

The campaign looked to target both local and visiting celebrators, with activations touching across airports, pop-ups and the eventual parade. The vodka maker saw a clear opportunity in catering to a massive, engaged consumer base that industry research indicates is largely underserved. I have my doubts about that "industry research", as at least three big vodka brands (Absolut since 1979, SKYY since 1992 and Stoli about as long as that) have GREATLY served the community in many way.

Elements of the campaign include a House of Pride with Van Ness, an Insta-worthy pop-up experience for media, influencers and consumers in downtown Manhattan filled with fun, global-themed Pride cocktails; donating $1 for every special bottle made to the Human Rights Campaign (totaling nearly $1.5m by 2021; and the NYC Pride March with Alyssa Edwards, with the drag icon riding a New York City-themed float dressed as ‘Lady Liberty.’

Another commercial with Laverne. In early 20th-century Russia, a man fleeing policemen in a dark train station grabs a bottle of Smirnoff No. 21 Vodka from a nearby shelf before hopping on the locomotive. Later, the beverage company says the drink was exiled to France as a woman running from police cars tosses the beverage onto an escaping airplane. Around the 21st century, the drink infiltrated Hollywood as celebrities smuggled it into high-profile parties. When the vodka is finally delivered into the hands of Laverne Cox by briefcase, Smirnoff says the not-so-secret story of it's infamous No. 21 is to be continued.

The diverse group anchors a new creative campaign entitled ‘Welcome to the Fun%’ that celebrated good times and, apparently, colorful parties with some bold personalities, in an effort to show that Smirnoff is American made and affordable.