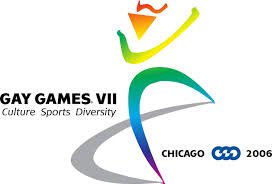 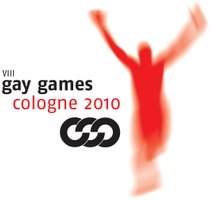 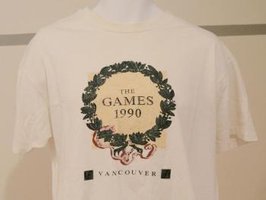 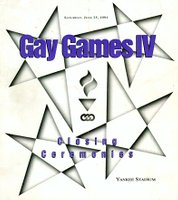 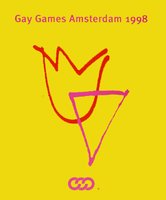 Due to a dispute, mainly about finances and the size of the event, the organizing committee of Montreal - preparing for the 2006 Gay Games - broke off from the FGG and decided to organize their own event, and named it World Outgames. The 2006 Gay Games were then organized in Chicago, ending just a week before the Outgames in Montreal. This led to problems for many participants, most of whom had to choose between the two. Chicago drew approximately 12,000 participants, Montreal drew an estimated 8,000 athletes - a third of the organization's original projections.

To avoid a clash of two such major events in the future, the Outgames decided to move their planning one year, so are now taking place one year after the Gay Games. The 2017 World Outgames will take place in Miami Beach, and are expected to bring in USD 125 million in revenues. 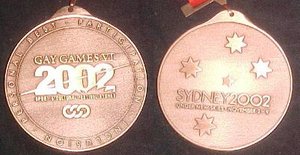 I personally visited the event in Amsterdam, Sydney and Cologne, and can honestly say that the week in August 1998 in Amsterdam was probably the most ‘magical’ one in my life. For once, ‘we’ were a majority: not only do 200,000 LGBT visitors in a city like Amsterdam (with only 800,000 inhabitants) make a big impression, but each and every single inhabitant, shop owner, tram driver and policeman seemed to be wearing a pink ribbon, boa, pin or rainbow insignia. The Opening Ceremony in the Amsterdam Arena with over 40,000 guests generated so much positive energy that it would probably have been visible from the moon. The Gay Games V were a huge cultural and athletic success (albeit not so much a finanical one), and an excellent example of integration, respect and tolerance.

One might think that the Olympics are the biggest sport event in the world, but in terms of number of participants, the Gay Games are considerably larger. 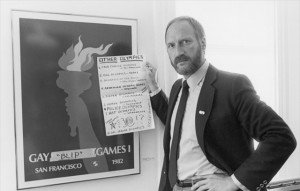 Wikipedia describes it as “the world's largest sporting and cultural event organized by and specifically for LGBT athletes, artists, musicians, and others”, as it has meanwhile grown into an event with much more than ‘just’ sports and games. Also, everyone is welcome to participate, although the percentage of straight athletes is limited.

In 1980, Dr. Tom Waddell, a 1968 Olympic decathlete, led a group of San Francisco residents in conceiving the event now known as the Gay Games. Tom dreamed of a sporting event based on the philosophy that "doing one's personal best should be the paramount goal in any athletic endeavor."

It welcomes participants of every sexual orientation and every skill level. The goals were to promote the spirit of inclusion and participation, as well as the pursuit of personal growth in a sporting event.

The official concept and purpose of the Federation of Gay Games (FGG) is:

“to foster and augment the self-respect of lesbians and gay men throughout the world and to engender respect and understanding from the non-gay world, primarily through an organized international participatory athletic and cultural event held every four years, and commonly known as the Gay Games.” 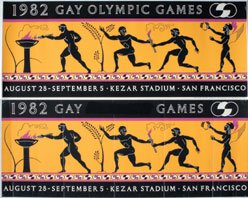 Note: the original name was Gay Olympics, but the International Olympic Committee (IOC) and the United States Olympic Committee (USOC) filed a lawsuit against the use of that moniker, because the USOC has the exclusive rights to the word Olympic in the United States. The games were then branded as Gay Games. Noteworthy is that there are other sports events which carry the name “Olympics” (for instance the Nebraska Rat Olympics and the Police Olympics), to which the USOC did not object. One might wonder why the combination with ‘gay’ did lead to protests… It retains many similarities with the Olympics, including the Gay Games flame that is lit at the opening ceremony. On the picture above, you see Dr. Waddell with the original poster, where the name "Olympics" is blacked out. The poster on the left shows the same 'development'.

The first Gay Games were organized in San Francisco in 1982, as were the second in 1986. Subsequently they were hosted in Vancouver, New York, Amsterdam, Sydney, Chicago, Cologne and Cleveland – in 2018 they will be in Paris. The number of participating athletes grew from 1,350 athletes from 12 countries, competing in 17 sports to more than 10,000 participants in Cologne and 9,000 in Cleveland, with a highlight of 14,715 in Amsterdam in 1998. 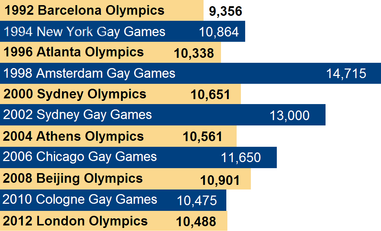 Note: the 2014 Gay Games were sponsored largely by local and regional companies and organizations, plus a few (inter)national brands: Ernst & Young and Marriott as platinum sponsors, Coca Cola, United and Wells Fargo as gold sponsors.

The Gay Games: but WHY?

Again, I really cannot count the many times I saw or heard the question: “You all want so desperately to integrate, so why would you organize a separate gay event?”. 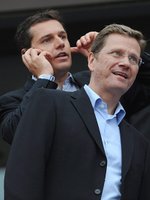 Well, first of all: we do not strive for “integration” so much as we want to have equality, which are two separate things.

Secondly, everyone is welcome to participate in the Gay Games, including heterosexuals.

Thirdly, and maybe most importantly: there is nothing wrong with organizing or participating in an event that is fun, athletic, diverse, cultural, inclusive.

This picture shows the German foreign minister Guido Westerwelle, Vice Chancellor of Germany from 2009 to 2011 (the first openly gay person to hold either of those positions) and his partner Michael Mronz at the opening ceremony of the Cologne Games in 2010..

The Gay Games have illustrated that it caters to a need of the LGBT world, and that sports and competition can be successfully used to unite and entertain, but also to further causes and build the community. A number of ‘spin-offs’ are now organized annually, and thousands of gay sports teams have been created around the world. Often these are recreational, and only compete with each other in low profile (international) events but sometime they rise to a different level.

Note 1: in the 2008 Beijing Olympics, only ten athletes were openly gay, during the 2012 Olympic Games in London this number had risen to 23. The Sochi Winter Olympics only saw 7 openly gay participants, due to the newly introduced anti-LGBT legislation. 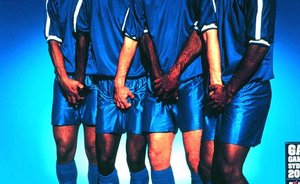 Note 2: after all the turmoil with the Russian winter Olympics, many messages of support for the LGBT community and participants were issued, mostly by (N)GO’s, like the Canadian Institute of Diversity and Inclusion. But one supplier had a perfect answer. XXL All Sports United, a Norwegian sporting apparel retailer, released a commercial that showed its support for LGBT people at the 2014 Winter Olympics. In the video, a female athlete goes into the airport to check in. Many male athletes vie for her attention, but in the end, she meets up with another woman, whom she kisses. The pay off is “Whatever team you play for” - an excellent wordplay and a strong message of support. Several Norwegian athletes appeared in the clip.

The EuroGames, officially called the European Gay and Lesbian Multi-Sports Championships, are a sports-for-all-event, open to everyone, irrespective of sex, age, sexual identity or physical abilities. Created in 1992 in The Netherlands, it is now an event with over 5,000 participants, that is organized every 2 or 3 years in a European city.

The annual Euro Gay Cup (sailing) was started in 2001 and has been held in Vinkeveen, Paris, Berlin, Cowes and Lemmer. Competitors have entered from the UK, Netherlands, Belgium, France, Germany the USA and Australia.