Gillette is an American brand of safety razors and other personal care products, owned by Procter & Gamble. The Gillette Company was founded by King C. Gillette in 1901 and merged with P&G in 2005. Most assets were incorporated into Procter & Gamble's two main divisions, Beauty and Household Care.

The Gillette R&D center in Boston, Massachusetts, and the Gillette South Boston Manufacturing Center (known as "Gillette World Shaving Headquarters"), still exist as functional working locations under the Procter & Gamble-owned Gillette brand name. Gillette's subsidiaries Braun and Oral-B, among others, have also been retained by P&G.

Whereas the Gillette website remains silent about Diversity, the corporate site says: "P&G is a Company that believes in diversity and inclusion. A commitment we take pride in." Check out the separate article for more information.

There are a few classic print ads from Gillette that may look like they feature gay consumers, but this is probably not meant that way.

The playful intimate moment between Roger Federer and Tiger Woods at the end of the 2007 clip Champions (what? male touch?!) and the slightly irritated response to it were deemed by Adrespect to be "walking a fine line of homophobia".

The French ad of hugging footballers can be seen in the light of "sport unites".

The earliest appearance of an ad targeted at the gay customer that I could find was from 2013. The campaign was called "Make your body style the best accessory this summer" and the ad appeared in OUT magazine.

After the toxic masculinity backlash, Gillette tackled gender once again later that year. They "swore to embrace and promote inclusive representations of gender" in the #MyBestSelf campaign.

In 2019 Gillette was lauded for this groundbreaking transgender ad that championed gender inclusivity. To demonstrate that 'The Best a Man Can Get' includes all men, Gillette released the short film titled 'First Shave' which stars Samson, a real transgender teen, who is being taught how to shave for the first time by his father. Sat next to his father, Samson talks directly to the camera to discuss his positive feelings since his transition. In the video, Samson says he's "glad I'm at the point where I'm able to shave."

The onscreen text at the end of the film reads 'whenever, however it happens - your first shave is special.'

The film was met with a positive response on social media, with many lauding the shaving brand for addressing a subject that resonates so much with the trans community. 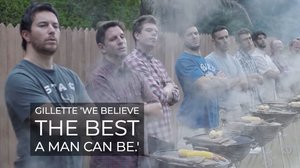 Gillette sparked a huge debate about the next generation of masculinity when it launched it's "We Believe: The Best Man Can Be", a corporate social responsibility advertising campaign, in January 2019.

Instead of promoting their core product (razor blades), Gillette took their ancient slogan "The Best A Man Can Get", and built on that for an inspiring "toxic masculinity ad", asking: “Is this the best a man can get?” The company addresses the #MeToo movement and the role toxic masculinity plays in it. Rather than focusing exclusively on a negative, shaming note, Gillette smartly transitions into framing the #MeToo movement as a chance for men to be better while still being men. As the narrator says: “Because we believe in the best of men.”

Although the ad aimed to simply point out that certain society learned behaviours can be damaging for both men and everyone else, it sparked boycotts, with many criticising the shaving brand for its foray into feminism. Despite the backlash, Gillette argued it had a legitimate right to speak on the subject as the 'world's largest marketer to men.' 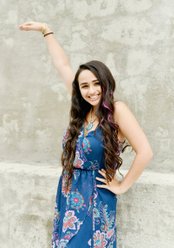 Not much later Gillette Venus launched a campaign called #MySkinMyWay, with transgender activist Jazz Jennings, one of the youngest publicly documented transgender individuals in the world as the spokesperson. The campaign aimed to "re-right" the rules regarding skin, because "no one other than you should have an opinion about whether you shave, how you treat your body hair, or how you decorate your skin with tattoos or makeup."

The initiative wasn't just about individuality. It was also about inclusivity, showcasing people of several backgrounds and experiences all united under one message. "My favorite thing about the campaign is the diversity and the inclusion," Jennings said. "Gillette Venus is celebrating every woman and every kind of skin. All ethnicities, identities, and inclusivity are important. People have tried to invalidate my identity as a woman. When a major company is endorsing someone who is trans, they are saying, 'We support Jazz and her identity.' A lot of people don't embrace our identities or allow us to express who we are authentically. Venus is saying, 'No, everyone can be who they are.'"

Although the Boston Pride Parade was canceled due to the pandemic, Gillette marked the occasion in its own way: the Gillette Stadium was lit up to celebrate 50 years of #BostonPride.

The stadium in Massachusetts again displayed a huge Pride flag in 2022 with the tweet: “Gillette Stadium is lit up tonight in celebration of #Pride2022” – with the brand name also wrapped in rainbow colors. Most comments were negative. However, the New England Patriots told these trolls "Our comment section is monitored and there is no room for hate".

The LGBT employees of Gillette participated in Pride parades for years, supported by the brand on social media. 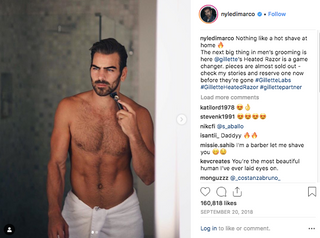 In 2018 Gillette started to employ influencers on Instagram to compete with flourishing competition from direct-to-consumer brands such as Harry’s, Dollar Shave Club and Billie, all of which have used social media marketing to great effect in recent years. They chose Male, Athlete, Family, Gay and Female influencers.

As the most prominent Instagram influencer in their lineup, model and activist Nyle DiMarco was a good choice: with 1.7 million followers, he is a hot commodity. In 2015, DiMarco was the winner of America's Next Top Model, becoming the second male winner and first deaf winner in the show's 22 seasons. In '16, he and professional dance partner Peta Murgatroyd were the winners of Dancing with the Stars. 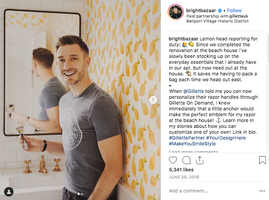 {for the data nerds: Posted at the end of September, DiMarco proves that a heavyweight influencer of his size can be invaluable for a brand of Gillette’s stature in raising awareness among key demographics. With 160,818 likes and 1,639 comments, DiMarco garnered an impressive engagement rate of 9.5%.}

Another gay influencer they chose was Will Taylor from New York City. He runs the bright/bazaar blog, and has over 320,000 followers on IG (at the time 254,000).

2020: But what is masculinity?
Here's Simon & Mickael's answer in a video shot in France for International Men's Day (yes, it exists: November 19). There was also another clip of Lois transitioning from female to male. They were fairly boring text animations, but they did show the good intentions.

Manscaping
Incidentally, the trend of 'manscaping' started with the gays: this created additional uses for the razor blade, as already shown in the advertisement in OUT. But other body parts also fell under the knife, which Gillette made good use of by drawing the attention of other customers to this. Not always subtle (left – probably for heterosexuals, with the middle picture definitely intended for gays) and sometimes with an animated film, and then also censored.

New products were even created, such as the groin trimmer, special shaving foam 'for there' and the 'groin anti-chafe stick' if things don't go so smoothly.

Conclusion
Gillette came late to the rainbow podium, but before the 'easy year' 2015, so they don't get many demerits for that. They have done a number of remarkable campaigns in various countries (but especially the US home market), including attention for trans persons. The rainbow support seems to come mainly from the parent company, but all in all, Gillette is doing reasonably well. I still miss the support for charities: they score a 7-.