A cruise is an all-inclusive holiday: travel, accommodation, food, excursions, entertainment. It would be good if any cruise would also be all-inclusive as to their passengers. Unfortunately, the typical patrons are - or used to be - older and more old-fashioned, so to join such a ‘family’ for a week or two could be awkward for gays and lesbians. 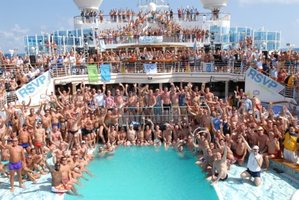 Note: having said that, the times, they are a-changing. A number of cruise lines have discovered the LGBT travellers, trying to haul them in. They have even set up onboard events like "Friend of Dorothy" meetings - a term that would mean nothing to the straight passengers, so it is a safe name for "meet your gay and lesbian fellow travellers".

Although my research primarily focuses on mainstream companies aiming at the gay consumer, I would like to highlight two gay owned and operated companies here that have set the standard in this field. Their marketing efforts might well be labeled LGBT, although also in this case, the B and T segments as such are difficult to reach - although they are obviously welcome aboard.

Note: 65% of qualified respondents within the 11th Annual Gay and Lesbian Travel Profile (sample size 4,500) reveal that lesbians and gay men who took a cruise vacation in the last year took a “mainstream” or non-gay cruise.

In 1985 RSVP vacations discovered the need among gays to have an all-gay holiday. The founder, Kevin J. Mossier, had a bold, new idea - to provide a safe, tailor-made vacation environment for gay men and lesbians. Unable, at the time, to find a resort that would open its doors to the concept, he found an understanding cruise line and RSVP was born. The first cruise - “A Cruise To Remember” - sailed out of New Orleans early 1986 with 750 guests ready to both create and enjoy the overwhelming experience that only can happen on an all gay vacation. 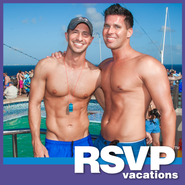 Since then, RSVP has offered cruise and land vacations in Asia, Africa, Europe and the Americas. In 1992 RSVP introduced the Sea Spirit, the first gay-owned gay operated cruise ship in the world. For three years she proudly flew the Rainbow flag in the Caribbean, New England and Alaska. "Over the years, RSVP has welcomed some of our community’s most amazing luminaries. We’ve had High Tea with Quentin Crisp, film presentations with Vito Russo, Q & A with Armistead Maupin, a look at Broadway with Harvey Fierstein and Anthony Rapp, GLBT history with David Mixner, and many more. Over 100,000 guests guests have travelled with RSVP in almost 30 years.”

In 1991 Atlantis Events entered the field, and in that year had their first all-gay resort event in Club Med in Playa Blanca, Mexico. What started with the very simple idea of "a gay week on the beach with friends" has blossomed into a company producing all-gay cruise and resort vacations all over the world. Now they are the largest company in the world dedicated to creating unique vacations for the gay and lesbian community, hosting some 20,000 guests a year. 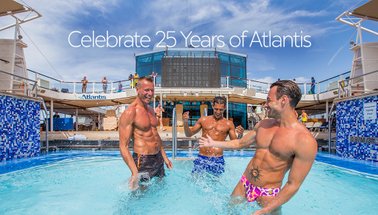 Atlantis' tagline is "The Way We Play" - indicating their focus on more entertaining trips than just sailing between destinations. Areas of sailing usually include the Caribbean and the Mediterranean every year, whereas the Baltic, Alaska, South America, Asia and Australasia have been on the agenda with some frequency as well.

The way they play includes poolside tea dances, theme parties that vary according to the area they sail in - "Greek Isles Party" for instance, and always the popular White Party as the final one - and excursions in collaboration with the cruise line (but often with their own guides). Personally, I have experienced the Atlantis feeling 8 times, and can confirm it is a unique and all-inclusive environment and way to travel. As a bonus, the stunning models that are shown in the advertisements are often real life guests and they - or their lookalikes - can be found on any cruise.

As Atlantis publishes on their website: "There's no typical Atlantis guest." The passengers range from early twenty to over 80, singles, couples, groups - from every walk of life. A stateroom sharing programme facilitates single travellers. The vast majority of the guests is North American, but the percentage of European and Australian guests has steadily risen in recent years. 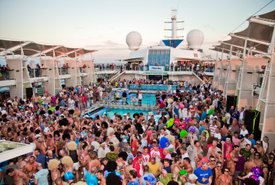 Note: legend has it that during one of the White Parties - on the top deck as usual - another ship that passed by contacted the bridge of the Atlantis ship to ask if there was something wrong, as they saw the massive amounts of smoke and lasers and many people moving around on the deck outside, all dressed in white. They could be reassured that all was well, very well... (Meanwhile the legend has been confirmed thrice!)

RSVP had troubles staying afloat, so to speak, and in January 2006, in a step into the “offline” world, gay portal PlanetOut (owners of Gay.com, the Advocate and Out magazine) agreed to purchase RSVP Vacations, for USD 6.5 million (and possibly USD 3 million in bonuses pending future company performance). All of RSVP’s 12 employees, including president Paul Figlmiller, were offered employment with PlanetOut.

RSVP’s results further deteriorated and they suffered a big loss when they chartered the Queen Mary II (QM2, at that time the largest and most expensive liner ever built) for the first ever transatlantic voyage for gay men and lesbians only. Figlmiller said he had chartered the prestigious Cunard liner because: "Gays and lesbians can now have civil unions in the UK and we want to support the UK for making that happen."

Note: transatlantic trips are usually meant to transfer a ship from its season at one side of the ocean to the other side for a next season. The costs to charter a ship for such a voyage (which does not have many interesting ports, and more days at sea) are usually less. 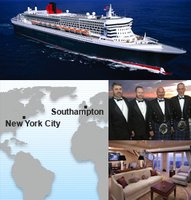 The QM2 was set to sail from May 29 to June 4, 2007 from New York City to Southampton (UK). The transatlantic crossing on the luxurious ocean liner was not your run of the mill gay cruise, which normally stops in a number of interesting ports, or sail in warm regions where relaxation or partying are daily activities. However, in spite of heavy discounts (USD 1,198 for an Ocean View Stateroom with a Balcony - USD 2,600 discount per person) the cruise was heavily undersold and added to an already unfavorable situation, leaving RSVP with big debts. At the close of the year in 2006, the company reported a USD 3.7m loss on revenue of USD 68.6m. Although this was an improvement on the 2005 revenues, the purchase of RSVP was the beginning of the end for PlanetOut.

Note: gay tour operator Pied Piper Lines advertised to the gay demographic with tickets for the exact same trip in 2017: "Take your place among the thousands of celebrities and dignitaries who have sailed across the Atlantic in unparalleled style and elegance". This time, it will not be all gay, however. 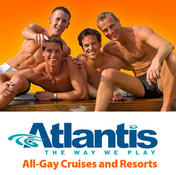 Atlantis and RSVP come together

In October 2007 they announced the sale of RSVP to competitor Atlantis Events, Inc.  The two labels remained separate, and only some marketing activities were combined. The images of RSVP as ‘upscale sightseeing cruises for a somewhat more mature crowd’, and Atlantis as ‘luxury fun holidays for the younger gays’ were maintained. Atlantis leans toward Royal Caribbean vessels and Celebrity, RSVP cruises are often with Holland America Line.

Today, Atlantis is best known for their all-gay cruises, on the luxurious ships they charter from the world’s leading cruise lines. The fact that they charter a whole ship means they can secure the “all-gay” character (with around 5% of the guests being women), but also that they carry the risk for occupancy - or lack thereof. This, plus the fact that they bring a whole team of hosts and entertainers, including DJs, comedians and often a surprise celebrity guest (like Rita Moreno, Deborah Cox, Roseanne Barr or Debbie Reynolds), makes their travel packages considerably more expensive than a ‘regular’ cruise. 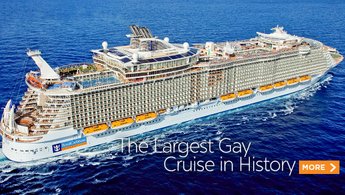 They run about 6 cruises a year, and organize 2-3 resort holidays. The cruises are from "boutique sized" (600 passengers) to the Largest Gay Cruise ever, with more than 5,000 guests.

The ‘resident’ staff of the ships often looks forward to the gay cruises, as the guests tend(ed) to be two decades younger than the average straight cruisers, and the camaraderie and the feeling of ‘one big happy family’ also shines on them. Then there are the events and parties, which are definitely different from other cruises. Plus - tipping is probably more generous.