Do you consider yourself "a gay consumer"?

This first question was meant to allocate a ‘label’ to the participant and basically divide them into two groups. However, I not only asked about the sexual preference, but also offered the LGBT participants the option to qualify themselves one step further.

The answer “I am gay and a consumer, but not very different from a straight consumer” shows that 20% of LGBT do not think that they - off hand - as consumers are different from heterosexuals, yet another 14% states that it does make them special.

One answer scored 3%: “I am member of the LGBT community, but not gay”. This illustrates the difficulty I encountered in defining target groups and strategies (and naming the thesis). Even when offered the ‘almost all-inclusive’ definition LGBT, there are still 3% of people who want to be called differently, even though they would be considered LGBT for all intents and purposes by an outsider.

Straight consumers were asked: “OK - so you are not gay... but would you know something about gay consumers?”. A vast majority (83%) said “sure” or “maybe”, only 17% did not feel they would be able to answer those questions: they skipped the next few questions.

Where do you live?

In my research I mainly compared the US market with the Dutch one, so I wanted the participants to be predominantly from these two markets. However, any entry was appreciated, also to add to the population and for benchmarking.

Taking the 2,409 entries into consideration where the participants left personal details, the majority of the population came from the USA (40%), Netherlands (18%) and the United Kingdom (10%).

The age distribution was nicely spread over the different segments for both groups, with a slight dominance in the 31-50 segments.

The participation of younger people (20-30), who are not yet ‘full consumers’ was small enough not to distort the picture. 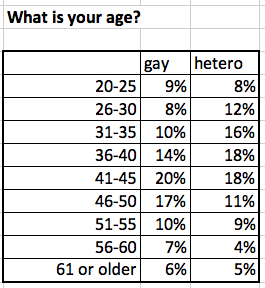