All these famous LGBT are on the 'supplier' side. But what about the consumers?

Many straight (mostly recording) artists have risen to fame thanks to - and hardly ever ‘in spite of'! - a dedicated gay following: Judy Garland, Bette Midler, Liza Minelli, Barbra Streisand, Cher, Madonna, Lady Gaga, to name but a few. This often concerns a diva: ”a celebrated female singer; a woman of outstanding talent in the world of opera, and by extension in theatre, cinema and popular music.”  One of the explanations for this is that a diva has a glamorous way of dressing, puts up a real show, often is or was an underdog - all aspects that many LGBT can or would want to identify with. Either before or after becoming a “gay icon”, the star frequently speaks out for equality or even becomes an activist (like Cher or Lady Gaga).

Similarly, the theatre has always drawn many LGBT art lovers, especially musicals. Many gays know the complete lyrics (and yes: steps) of their favorite musicals by heart - and are not afraid to 'perform' them. TV shows like Glee have drawn large gay followings, not only because of the 'natural' inclusion of LGBT characters, but also because most of the players are underdogs, who display spontaneous outbursts of gratuitous singing and dancing. School as a musical certainly beats being closeted or bullied!

A parallel can be drawn to the movies, although for movie stars it lies a bit more difficult: they portray a character and being openly gay, or even activist, could hurt their career. Or could it? Can a gay person still convincingly portray a straight character? The answer is yes: as witnessed by Neil Patrick Harris as the womanizer in How I Met Your Mother. 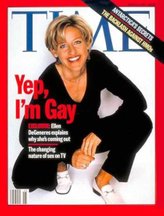 On the other hand, Ellen Degeneres is a good example of how a (very public!) coming out can be detrimental to your career. After the famous “Puppy episode” in which her character, and by proxy Ellen herself, came out, her show was soon cancelled. Due to a lobby by the conservatives, advertisers pulled out and the network decided to cancel the long-running series, which had good ratings thus far.

Ellen did not get many job offers in the subsequent period, until she started hosting a day time talk show, which became so popular that she not only won a large number of awards, but without doubt became one of the most powerful and respected people in show business.

For more than 20 years, GLAAD has tracked the presence of LGBT characters on television: "Where We Are on TV". This may not seem like Marketing the Rainbow, but the presence of such personas on TV is like a thermometer: both a reflection of the times, as well as the road  towards acceptance, and thus encouragement for companies to target LGBT.

When Ellen had her coming out in the 90s, the prevalence of LGBT characters on TV was not yet very broadly developed, and the ones that were featured often were caricatures: fun folk, drama queens or depressed victims. By 2016, this had changed dramatically - a sign of the times, which runs parallel with the perception of the public about acceptance of LGBT and equal rights. 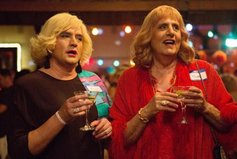 A GLAAD report in 2016 found that 4.8% of actors appearing regularly on prime-time network series portray LGBT characters, up from 2.9% in 2011. This percentage is close to the established percentage of LGBT prevalence in the population, which would mean that the taboo on gay characters in mainstream media has practically disappeared. The increasing tolerance is a sign for advertisers that it is OK to market their products or services to the LGBT market. This trend continued, especially after the landmark SCOTUS ruling of 2015 about same-sex marriage. 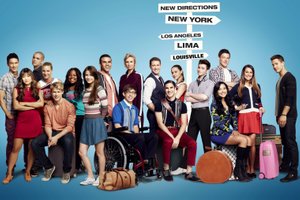 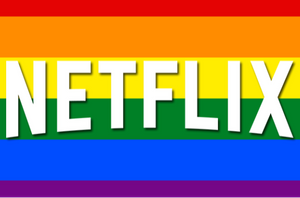 An honorable mention goes to Netflix, who by now have a long-standing history of inclusion and diversity. Some 'experts' accused them of pinkwashing, but I debunked that myth in my (Dutch) blog for Frankwatching. Autostraddle made an inventory of the content that Netflix presently (Dec 2020) has on offer. They count no less than 95 (!) products, varying from shows where almost everyone is LGBT (Pose, Tales of the City) and series centered on an LGBT character "with lots of gay content" (Feel Good, Gypsy, Orange is the New Black, Sense8) to films or series with the casual appearance of LGBT, either with or without a specific story line (Black Lightning, Grey’s Anatomy, Sex Education).

That is, for sure, not even close to pinkwashing! On the contrary, the variety of content, and the possible weight or attention given to LGBT characters is outstanding, and makes Netflix a role model in the world of TV and film. 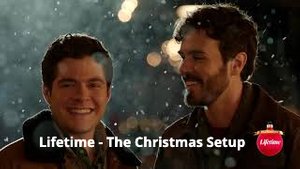 With their diversity policy, Netflix was years ahead of other content providers. Although it took Netflix until 2019 to release the first Xmas movie with a gay character (Let it snow), it opened the floodgates. All of a sudden, the exclusion of LGBT+ stories from holiday movies is now a thing of the past. The 2020 season treats us with Hallmark's The Christmas House, Freeform’s The Thing About Harry, Lifetime's The Christmas Setup and Hulu's Happiest Season. They all seem to be scrambling for our attention and vote. For me a case of 'great, but too 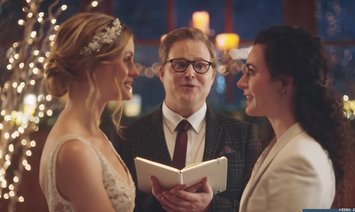 In fact, Hallmark made a BIG mistake. OK, they had some rainbow content from 2015 onwards) but when the pulled the Zola commercial "Easy Wedding Planning" from their channel after complaints from, who else, One Million Moms, heads rolled. There was a profuse apology, but that was not enough: CEO Bill Abbott of the Hallmark Channel’s parent company Crown Media Family Networks eventually resigned. And then the LGBT content was produced.

Although LGBT characters have been depicted in video games since the 1980s, they have been a rare occurence for a long time, reflecting the overall heteronormativity of the medium. While there has been a trend towards greater representation of LGBT people in video games, they are frequently identified as such in secondary material, such as comics, rather than in the games themselves. Gamesradar’s Sam Greer pored through thousands of gaming titles and found 179 games with any LGBT representation. Of those, only 83 have queer characters who are playable. And of those, only eight feature a main character who is pre-written as queer as opposed to them being queer as an option.

As in other media, LGBT characters in games often suffer from the "bury your gays" trope, a long-lasting narrative convention that requires that LGBT characters die or meet another unhappy ending. According to Kotaku, these characters are "largely defined by a pain that their straight counterparts do not share". 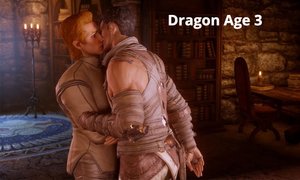 A common method of introducing LGBT characters is to reveal their sexual orientation through 'gender inversion'. A male character's homosexuality is often indicated by making him a sissy character with effeminate or flamboyant mannerisms, dress, and speech. The underlying assumption is that homosexuals are also frequently transgender and, therefore, possess mannerisms stereotypical of the opposite sex. Although mainly used in video games for its comedic value, gender confusion has also been used as a tool to offer social commentary about sexism or homophobia. The censorship codes of Nintendo and Sega limited the usage of gender inversion to exclusion of cross-dressing until 1994. The video game Mass Effect 2 remains popular more than a decade after its original 2010 release. Early 2021, lead game designer Jonathan Cooper revealed that the game originally had a same-sex romance, that is, until, outcry on Fox News pressured game studio BioWare to delete the subplot from the game. Cooper took to Twitter to confirm that the character Jacob Taylor would have had a romance with his fellow crew member MaleShep (the male version of the player’s character). Taylor modeled and animated their love scenes together after Brokeback Mountain- until Fox News intervened.

little too late'. We entered the 21st century 20 years ago. Even the waterfall of LGBT-themed commercials that erupted after the 2015 SCOTUS decision did not lead to a change of policy for the four streamers mentioned

It took Netflix until 2021 to give us one that had gay leads: Single All The Way. Gay Times: "Netflix has just made history with the release of their first ever Christmas film centering on a gay romance." 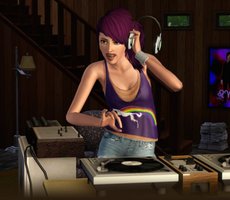 The Sims is a simulation game where you create and play one or more characters. You can create a character with precision down to the shape of their cheekbones or the size of their beer gut. In the fourth edition of the Sims, which came out in 2014, there were a few bugs, like it did not allow players to enter words like “gay” and “queer” and “transgender” into the name or description of characters. EA, the maker of the Sims, responded quickly to the issue, promising it was unintentional and would be resolved ASAP. Sims has a long history of being queer-friendly. In fact, as one blogger observed, the Sims 4 is so gay that it was slapped with an “adults only” rating in Russia because of Russia’s anti-gay laws. Since the very first version of the game, Sims all have the potential to be bisexual and same-gender relationships are allowed. In fact, tt was an unintentional kiss between two female sims during a public preview that propelled The Sims into infamy back in 1999. In the Sims 2, same-gender sims were able to be married, which was ahead of the times.

The Sims 4 actually had a preloaded gay couple in the game for the first time, though individual preloaded characters have been inferred to be gay or lesbian in previous games. A female DJ with a rainbow shirt was described as "definitely into women".

To illustrate that same-sex attraction is not invented by humans, Animal Planet ran a campaign  in 2018 called Love is natural. They used images of different animal species, where a couple of either male or female animals show affection for each other. It was a series of print advertisements created by Y&R, Turkey.

Already in 2004, National Geographic had shown this behavior in

PETA demonstrated this in 2021 with material about dolphins, penguins, lions, monkeys and giraffes.