SKYY vodka is an American vodka produced by the American division of the Italian Campari Group. Its creator, Maurice Kanbar, claims the vodka is nearly congener-free due to its distillation process. That is why the popular company slogan is "Vodka so filtered - we even took the Russia out of it". The bottle is a cobalt blue with a clear, adhesive label. In 2008, SKYY expanded the Vodka line with seventeen new flavors, referred to as Skyy Infusions. These Infusions are made with fruit.

Both the unflavored drinks (more than just vodka) and the Infusions won many medals at the San Francisco World Spirits Competition.

Since its inception in 1992, SKYY has been a staunch supporter of causes important to LGBT communities across the country. The first ad targeted at gays I found dates from 1995: Just Out.

They were the first big brand to show a lesbian couple in an ad, and one of the very first brands to use the theme "gay marriage" - as early as 2002! Their campaign gave a modern twist to an old-fashioned marriage proposal. At the bottom of the cocktail is an enormous diamond ring. Though the visual still shows a glamorous male ideal of lesbians in high heels and bright red lipstick, these women are not interacting in the presence of men as many other such pairings do. This ad has appeared in mainstream art/fashion titles Interview and Paper as well as the gay OUT magazine.

Not much later, they used an image of two men in an elevator, pushing the Stop button. A number of other lesbian and gay images have been used around that time as well.

In 2011, a gay blogger took offense at the “Hypersexualization of Gay Men” in the SKYY Blue campaign. He found that it was “incredibly stereotypical and not beneficial for the homosexual male population”. He blamed this on the fact that all the men are looking at each others' sex organs, insinuating that all gay men do is lay around and stare at each others' junk - obviously not a “productive portrayal”.

At the same time, the message that the drink is not vodka, but a low alcohol malt beverage, is lost – making it look like the guys are splurging on vodka ‘straight’ from the bottle. On the bright side he mentioned that the ad portrays relatively attractive men, a (probably) gay black man who is dark black (not often portrayed in other ads) as added diversity – and in general it portrays gay men, which most companies shy away from. 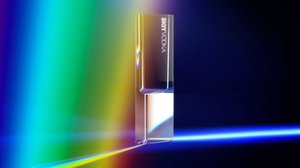 In Peru, the agency Geometry designed a very special Pride Glass for SKYY. Inspired by the meaning of the original rainbow flag, they wanted to create a new symbol as a constant reminder of the fight for LGBT+ Rights. By redesigning the vodka glass into a triangular shape they created a prism that produced a rainbow when a light shone through it.

The campaign was supported by an inspiring clip.

Celebrating the legalization of same-sex marriage in Australia the next year, SKYY released a limited edition can fitted symbolically with a ring. The drinks company claims to have achieved a world first, fitting the can with a polished ring pull finished with a sparkly cubic zirconia.

Called YYES, the premix drink variety follows on from the launch of #CheersToEquality campaign. One dollar from every YYES product sold was donated to the Just.Equal organization, to support its ongoing work in addressing the needs of LGBTI Australians through lobbying, community consultation, and social media.

When the Australian population had to cast a vote on marriage equality, SKYY launched their #CheersToEquality campaign there as well, with a range of events and promotions aimed at helping Australians say "yes". The campaign included comedian and TV personality Joel Creasey.

They created a 'smart glass': the moment two smart glasses clink together, a photo was automatically taken of the holders saying #CheerstoEquality and a digital signature petitioning support for marriage equality was sent through Twitter using #auspol – with the aim to drive positive change, get the attention of political decision-makers and turn a moment into a movement.

So by redesigning the cocktail glass they turned ‘cheers’ into a trigger. This generated over 27.5 million impressions (population 25 milliiomn) and $555K in earned media. It raised around $50,000 for their charity partner just.equal. SKYY: "But most importantly, it brought people together to celebrate unity over division. Because declaring your love should be something we can all cheers to."

The result of the non-binding referendum was a YES, which the government deemed valid enough to change the law, so same-sex marriage became legal late 2017. 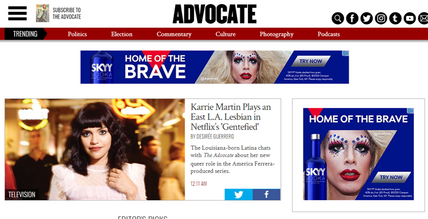 As marketers seek to protect their brands from appearing in the wrong environments, today’s brand safety technology has inadvertently diverted media dollars from LGBT publishers and journalists through so called "keyword exclusion lists". These tell automated digital advertising models not to put a brand’s advertising alongside content that could be potentially non-brand safe, based on specific words or phrases. But words like “sexuality,” “queer,” and “gay” can be used in ways that are sexual and discriminatory, or in ways that are empowering and affirming. And the content in pieces that discuss things like "bullying" or "violence" can differ in their message from article to article. An aggressive keyword exclusion list lacks the flexibility to identify the difference - it lacks the technological processing to understand important context around keywords.

In response, Mindshare USA, the global media agency network, developed a LGBT private marketplace (known as a PMP) to address the issue. SKYY was the first-mover and launch brand for the PMP, taking a stand to support LGBT voices and journalism.

Leading up to the U.S. Supreme Court's decision on gay marriage in June, SKYY expanded its "Toast to Marriage" campaign. The campaign, in partnership with Freedom to Marry, a national organization dedicated to winning marriage nationwide, was in its second year. Between April and the end of June, Skyy sponsored "a variety of high-profile events", as well as host private dinners to connect supporters including political advocates, brand executives, creative professionals, and digital influencers. The events were held in New York City, Dallas, Austin, Detroit, New Orleans and Washington, D.C.. Vice President Joe Biden made a special appearance at the event in New York City. He reflected on the beliefs his father instilled in him from an early age, stating: “They love each other, it's simple.“

A dedicated Toast to Marriage site, along with heavy social promotion encouraged supporters to express their views using #ToastToMarriage, as the core of the campaign.

In the national campaign 'Proudly American,' SKYY celebrated the diversity of Americans. The campaign captured SKYY’s progressive and innovative origins and featured influencers from all walks of life, kicking off with out-and-proud Olympian Gus Kenworthy and RuPaul’s Drag Race favorites Trixie Mattel and Dusty Ray Bottoms. The campaign juxtaposed famous phrases from American history, such as 'Home of the Brave,' with powerful, vivid imagery featuring people who shine brightly in the face of adversity, celebrate diversity, and are proud to inspire today’s articulation of being American. It included out-of-home, digital, social media, PR and event activations. 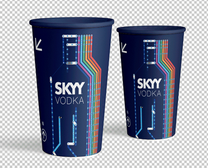 In June SKYY announced that it would serve as the official vodka of both New York City WorldPride and Los Angeles Pride, continuing its support of the nation’s largest LGBT+ celebrations. As an official partner, they had a significant presence throughout both festivals, in addition to honoring Pride Month with loud-and-proud advertising across both cities. They had participated as sponsor in Prides before, like LA in 2016 and Sao Paolo in 2018.

In New York, in honor of the 50th Anniversary of the Stonewall riots, they partnered with the original vogue performers, to pay tribute to the people and history that have shaped LGBT+ culture today. The performers rode and vogued on the SKYY parade float during the WorldPride Parade in New York. 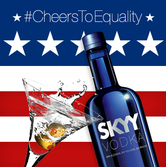 In the fight for marriage equality, SKYY was quick to choose sides, and released the campaign #CheersToEquality. The project coincided with the boycott of Russian vodka, in response to Russia’s anti-gay laws. SKYY presented themselves as "American made, and made for everyone." 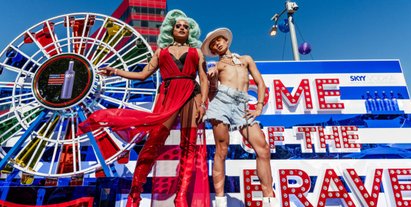 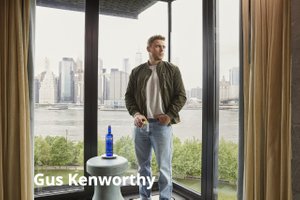 SKYY: “This Pride we are also centering and prioritizing Black queer people who need us all more than ever. In addition to our support of The National Black Justice Coalition, this year we will be changing our online branded banner advertising for Pride to display a simple, unbranded message: Black Trans Lives Matter. The non-branded banners will direct to organizations dedicated to protecting and defending the human rights of Black transgender people.” 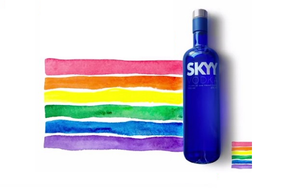