Pepsi, and the other brands belonging to the Pepsico group, were among the first major fmcg brands to use

Marketing the Rainbow. Here is a look at the colorful efforts of SodaStream.

See my article on Pepsi for that particular brand, and also bubly Gatorade and Doritos for other Pepsico brands.

SodaStream was founded in 1903 in England but is now an Israel-based manufacturing company best known for its home carbonation product. The company's soda machines, in the style of soda siphons, add carbon dioxide to water. It also sells more than 100 types of concentrated syrups and flavorings that are used in the process of making carbonated drinks. In 2018, the company was acquired by PepsiCo for US$3.2 billion. PepsiCo was attracted to the company due to its technological innovations and a desire to move into providing more healthy products. SodaStream has since launched a variety of PepsiCo flavors into their range.

In 2019 we also saw a video celebrating love in the past century. The video urges viewers to "imagine a world we never have to hide in," as people across decades pose for photos capturing the little moments — two 1912 male miners sharing a kiss, a female sailor from the Great Depression era flexing her biceps with another woman's name tattooed in a heart, two dazzlingly smiling girls hugging pastel balloons, two fathers and their children.

But perhaps the most notable scene is the one from 1967 where two people of color get married. The bride is played by Lila Blilat, a transgender woman from the Bedouin town of Rahat, Israel, near the SodaStream factory. She comes from a conservative, nomadic Muslim community and has traveled far to not only be part of the beverage company's campaign, but also to be the face of the 2019 Tel Aviv Pride Parade.

In addition to 'sustainability', they also consider 'equality' to be of paramount importance. “We want to spread that message worldwide: love is love. A first step to make the world more beautiful”, says marketing manager Tamara Kroon. For example, since 2018 they have been celebrating Pride Month with striking videos, starting with Home is where your love is. They also released a limited edition bottle set that year: it included two liter bottles with same sex parents and a half liter child bottle.

In 2019 they were partners of Pride Amsterdam. Here they also put 'sustainability' into practice. As the last boat in the Canal Parade, with the theme 'Love of Tomorrow', they took on the task of fishing up all the remaining plastic from the canals of Amsterdam: "Don't talk, but shovel nets", they said.

In that year they launched the Pride Starter Kit in several countries: the My Only Bottle with a rainbow scarf. While you keep the bottle to yourself, the scarf was designed for sharing. You cut it along the dotted line to give the other half away to a loved one. Share the love! For each kit, 1 euro was donated to the International Lesbian, Gay, Bisexual, Trans & Intersex Association (ILGA World). In addition, they also released a retro 90s themed model in collaboration with actress Tori Spelling. The main colors were – coincidence? – that of the trans community. 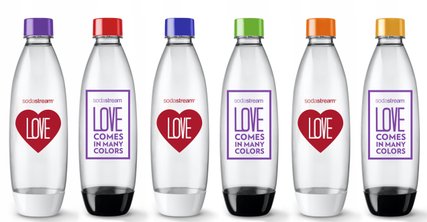 That year's limited edition set was called "Love comes in many colors" where there were 6 caps in the colors of the rainbow flag. 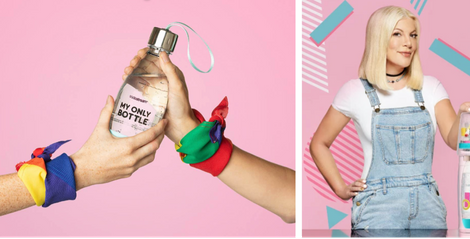 Besides being sustainable, the brand is relevant, colorful and works together with many charities. Campaigns or attention outside the Pride season would earn a bonus point. SodaStream scores a 9.

With most Pride events canceled in 2020, we had to resort to virtuality and social media. SodaStream also hosted a virtual Pool Party and they joined in the celebrations.

In 2021, they invited Laverne Cox to celebrate with them.

The machine came in a rainbow outfit: with color markers, both the device and the bottles could be colored.

SodaStream also participated in the Pride in Antwerp, among others. The limited edition 'Rainbow Story' box was released. The package includes a sleek matt black sparkling water maker, a unique reusable bottle with a colorful lanyard and six rainbow markers to write or draw your personal pride story on the device.

This year the theme was “Set all your colors free”. The brand collaborated with local talent in more than 15 countries around the world. As more and more groups and identities emerge within the community, 8 colored markers were included. For the fourth year in a row, they partnered with ILGA World, who received 20% of the proceeds from the special edition products.