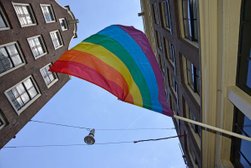 As the global visibility of the LGBT community grew over the past 4 decades, there has been steady increase in interest in this demographic as a consumer group, a trend which is particularly evident in the travel industry.

Are gay people interesting 'guests'? Yes - they take longer trips and at a greater frequency, spend more per day (because of higher free disposable income and a tendency for luxury) and travel outside the peak season

This makes them the ideal tourist!

Also, a larger proportion of their travel time is now “gay travel” time . They’re increasingly going on “gay holidays”, “gay cruises”, participating in “gay events”, and staying in “gay hotels” - even dining out in "gay restaurants".

The industry of LGBT travel, holidays, hospitality and all that comes with it was one of the first to attract companies, but more importantly cities, regions and countries: the so-called Destination Marketing Organizations. By now, many claim to be a gay destination and in the end it can become a self-fulfilling prophecy.

1. Unlike the purchase of a loaf of bread or an insurance cover, the sums of money spent in travel are very substantial. To divert this stream of money to your hotel, restaurant or city can be quite beneficial - a large share of wallet can be the result.

2. Many people, especially Americans, only have a limited number of holidays a year. They want to spend these as comfortably as possible. For gays this often means they would like to spend their free time, or at least part of it, in all-gay or gay-friendly surroundings. If you can brand your product (cruise, resort, safari, restaurant, car rental) as such, you could succeed in attracting the gay dollar.

The characteristics of gay tourism

Allegedly, it all started in 1973, when a gay travel agent named Hanns Ebensten (whose company is quite appropriately called HE Travel), the “grandfather of gay travel,” led a group of gay men down the Colorado River. It was the first gay travel experience of its kind and sparked a movement that’s exponentially grown over the last 40 years into a multi-billion industry.

However, lesbian and gay travellers have the same wide demographic segments as the straight travelling population. A retired lesbian couple will have very different expectations about their ideal vacation to a 21 year old gay backpacker, yet the traditional view about the LGBT demographic within the travel industry has been that there is a single "gay market". Wrong - yet, similarities can also be spotted: the desire to be treated equally, and with respect, and as a consequence loyalty to gay-friendly brands and places.

The (a)sexuality of public spaces

Tourists not only tend to go to places of historic, natural and cultural interest, but quite often to more urban destinations. The “streetscape” or environment in such places is of great importance for the choices the LGBT traveler makes. It has often been stated and confirmed by research that public space is not a-sexual, but overtly and naturally heterosexual. While straight people can be themselves and express their (sexual) identities by holding hands and kissing in public, gays most often cannot do so without feeling uncomfortable or unsafe - even in their own surroundings if they are not completely out.

Travel provides the gay tourist with the opportunity to escape the heterosexual norms of society and their day to day lives, so that they can be themselves, feeling an “existential authenticity”. For this to be possible, the environment needs to be gay-friendly at least, if not exclusively gay. The latter can be achieved with different levels of success by hotels, resorts, cruises and tour operators. The former is the ambition of the vast majority of destinations, vying for the patronage of the gay tourist. However, it is not enough to just file a claim of being gay-friendly: this could only last for a very short while, until the image has been tested.

Many hotels and destinations claim to be gay friendly - an easy claim to make - but do not take the necessary measures to ensure they actually are. It seems companies are keen to slap the phrase “gay friendly” on advertisements these days without putting a second thought into what the term actually entails. In fact, this could severely backfire, when guests who are expecting a gay-friendly reception and atmosphere are not treated the way they should be. The community is closely-knit and a bad experience goes around like wildfire.

On the other hand, as the scope for exploiting the tourism potential of destinations is, in marketing terms, limited to promotion, image-generation and product-positioning there is the self-fulfilling prophecy: if you claim to be gay-friendly, and gays are willing to accept that claim by visiting, the environment tends to grow more and more gay, and could grow more and more gay-friendly, even though the start of this process was weak, to say the least.

There have been a few "seals of approval", recognizing those parties that have proven to stand the gay-friendly test: hotels can be TAG approved (a registered certification mark owned by Community Marketing, Inc., awarded to 1,800 hotels and attractions worldwide), have a pink pillow in Berlin, or a roze loper if you are a care center in the Netherlands.

When a gay-friendly atmosphere in an area has been created, there is a risk of gentrifying the gaybourhood, aka gaytrification: once an area has been “adopted” by gays, it gains popularity and not only in LGBT circles but also in the mainstream. This can lead to the reappropriation of such environments by straight tourists and visitors, making the area less attractive for gay tourists (similar to the post-gaytrifiction process in cities). This has been the case in Miami Beach, for instance.

The most notable points in CMI’s survey were1:

Note 1: much of the existing research and surveys focus on the experience of gay men, and less so of lesbian women. In fact, this is not limited to research: in practice it seems that gay male presence, power and control dominate gay areas, thereby threatening lesbian space.

Note 2: Americans (and with that, American businesses) have become more accepting of the lesbian and gay community in recent years, especially after the 2015 landmark U.S. Supreme Court ruling allowing gay men and lesbian women to marry in all 50 states.

The volume of the market

The amount of money spent in this market is relatively easy to estimate, but difficult to measure. Spending can be calculated by researching (a segment of) the target group and projecting it onto the whole LGBT population. However, measuring the real spending and the effectiveness of certain campaigns is harder, because consumers do not always identify as LGBT when booking a trip, or checking into a hotel.

Different researches give different outcomes, as much depends on who is doing the research, and to what purpose. A survey done by a specialized LGBT company, with the aim to interest potential clients in this market is very likely to reach the top end of the scale, while research done by a mainstream newspaper may not reach a representative sample of the target group and may thus be on the lower side of the scale.

Having said that, even the conservative estimates arrive at a very impressive total expenditure, of dozens of billions of Dollars, Pounds or Euros. A Mintel report estimated the LGBT expenditures in the US travel market at USD 100 billion, others have put this figure at USD 200 billion. For the UK this volume was estimated at GBP 30 billion. GETA2 estimates the European gay travel market at € 50 billion.  Their membership base offers a “gay welcome” at 4,037 places in Europe.

In general: LGBT account for  13% of all global travel spending, while only making up around 4-5% of the population.

An Australian travel survey has revealed gays take 4.2 as many trips by air (and have 4.6 times more American Express Gold cards than the national average). That must be good news for American Airlines who appointed their own marketing manager for the gay sector. I spoke to the UK PR manager for American Airlines, Ian Burns. He told me he is "dotting the i’s and crossing the t’s with a British consultancy firm that will take on board the findings of research they are using which show lesbians and gay men are 17 times more likely to travel to the States."

Gay and lesbian events are growing year by year and are recognized as festivals with huge pulling power in a segment of the market that is more inclined to travel and spend money than the straight community. For years, the Sydney Gay & Lesbian Mardi Gras was the biggest event in Australia, measured by economic impact!

It has taken a few years to get away from segregating gay travellers into strictly gay hotels, but tourist boards around the world are now steering more gay tourists towards mainstream hotels. Coordinated efforts in Spain between Madrid Pride and Barcelona Circuit Party - among other things - resulted in a EUR 6.8 billion volume for gay travel in 2015.

When the recession hit in 2008, many marketing strategies were re-evaluated and changed. However, prevailing market wisdom says gays are less affected by economic downturns than heterosexuals. "Every recession has been our biggest growth year," says Todd Evans, chief executive officer of Rivendell Media, whose clients include Travelocity, Absolut, Bristol-Myers Squibb, and Johnson & Johnson. "Recessions make every company focus on who their consumers are, and that's what niche marketing is all about. The gay market is easy to target; it's an easy group to focus on."

Advertisers have it in their minds that gay people are recession-resistant, meaning they are more likely to continue their spending even in rough economic times. Why? Three reasons, Evans says: Gay people are less likely to let changes in the economy affect their behaviors, they have fewer (or no) children, and they are less likely to be strapped for cash. As a result, companies struggling to make money during down times often hone in on gay individuals and couples.

A study also found that gay people are more likely to continue to dine out and that gay men, in particular, are the least likely to change their restaurant spending during a slowing economy. Bob Witeck, chief executive officer of Witeck Communications says he and other marketers first became aware of these trends after 9/11, when travel and restaurant spending plummeted among straight consumers but remained static, or even rose, among gays. “Make no mistake; gay households, like all others, were struggling. No demographic research suggests these consumers are wealthier or better prepared during this economic downturn. Yet, they still believe that new destinations, new trips and new opportunities matter - which is a hopeful sign for all travel leaders.”

"While things have tapered off a bit, we are still buying our iPhones." But Justin Nelson, president and cofounder of the National Gay and Lesbian Chamber of Commerce, whose organization works with 1.4 million LGBT businesses and entrepreneurs, adds that while gay consumers are being targeted for their spending habits, that does not mean that gay businesses are escaping the wrath of the recession. "A lot of gay-owned firms are hurting just like their heterosexual counterparts. To survive, some gay and lesbian entrepreneurs are banding together. The common connection is ‘being a sexual minority’. That creates a strong bond."

Signals that LGBT tourists spend more and stay longer were confirmed in a survey by the head of the Tel Aviv Municipality’s Ir Olam and Tourism task force, which found that the extra spending amounts to as much as 40%: an average of $274 per day, which is higher than the general average of $192. The average stay was 6.5 nights, as opposed to 5.4 nights for other visitors.

Hospitality marketeers: buckle up. There is a heap of money that could come your way.