Unilever owns over 400 brands and had a turnover in 2021 of 52 billion euros. The company has done some corporate and multi-brand campaigns for Marketing the Rainbow, but the individual brands also had their own campaigns. Here is a look at the ice cream brand Cornetto.

Another gay themed Cornetto commercial from Thailand: Unexpected love. Boy and Aon are both freshmen Jujitsu players. One day, Boy asked favor from Aon to get closer to Fah - a Campus Star and Cheer Leader. And the unexpected and cute love twist happened along the way.

In Asia such stories are called "BL", which stands for Boy Love. There are quite a few of them in advertising.

The Rainbow Pop version released in Thailand and Indonesia had nothing to do with the LGBT rainbow, but it was fun (and – literally – sparkling). The nicely named UniCornetto and the gay-looking Mermaid were also not connected to “Marketing the Rainbow”.

Cornetto showed a commercial in 2003, that caused some upheaval.

A bikini-clad girl approaches a guy lounging in swimming trunks, about to enjoy a Cornetto ice cream cone. She sings: "New Wall's Cornetto… give it to me". He replies: "What's in it for me?" In a deep voice, she tells him, "I'm a man." Then she sings, "Surprise, surprise. Give me Cornetto and…"

Five (!) angry viewers complained about this ad to Ofcom - the British body responsible for standards of taste and decency in British TV advertising. They said that the advert contained a “negative message that being a transsexual or being associated with one was something to be ashamed of."

The ad agency said, "The intended humor was the man's surprise when the woman revealed her past. The overriding strategy of the Walls Cornetto campaign was to depict ice cream in the context of modern love scenarios. A man being attracted to a woman (who was once a man) was seen to be an example of a contemporary situation that is increasingly possible in mainstream society. The transsexual character was shown to have the upper hand and was not portrayed in an obviously negative light and the joke was on the male friend." The complaint was not upheld; Ofcom explained that they did not feel that the advertisement "over-stepped the mark."

"40 Love" is a short film for the Cornetto Cupidity series. Game, set and it's a match made in heaven when a young girl finds herself as an accidental target for love. Her relationship with a tennis pro doesn't start off well but will Cupid (Lily Allen) help to bring them together? 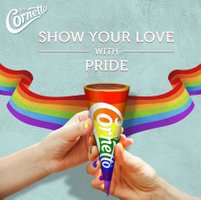 After the Indian Supreme Court decriminalized gay sex with the removal of the British legacy "Section377" in 2018, Cornetto celebrated on social media (along with many other brands).

A cute little LGBT-themed story - unfortunately it is only in Thai, but the story speaks for itself.

Apparently this type of stories is really popular in Thailand, at least with the brand and their agency.

Love Expert is a mini-series of shorts that are commercials for Cornetto. Only episode 1 features a gay couple, episodes 2 & 3 featuring boy/girl couples. Each episode is self-contained with no continuing storyline between episodes. 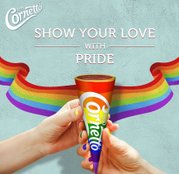 The product
The Cornetto ("little horn" in Italian) consists of a crispy baked waffle, coated from top to bottom with a layer of chocolate, combined with an ice cream - with the unique trademark of the chocolate tip. The product was born in 1959, when Spica, an Italian ice cream maker, came up with a groundbreaking innovation: creating the world's first packaged ice cream cone by isolating the wafer from the ice cream with a special coating of chocolate.

In 1976, the company and patent were acquired by Unilever, who began marketing the product in Italy through the Algida brand and abroad through other brands. The ice cream is available in different flavors, including Strawberry, Mint Chocolate, Nut, Lemon, and special editions such as Oreo, Matcha, UniCornetto, Mermaid and a Valentine's Day version.

The brand was marketed in several through successful advertising campaigns that placed the Neapolitan song "'O sole mio" in various stereotypical Italian locations and situations, adapting the lyrics. In 2000, the commercial was ranked 23rd in Channel 4's UK poll of the "100 Greatest Adverts". The theme resurfaced in 2006, this time sung by pedestrians, drivers, office workers and marathon runners in central London.

#AmarEsUnDerecho, Spain - 2018
Love is a right, that was the name of the campaign conducted in Spain during Pride 2018. The campaign shows a series of rights that, a priori, seem normal to everyone, but change depending on the country in which one is located. The campaign was supported on socials and with OOH, where the said rights were displayed. 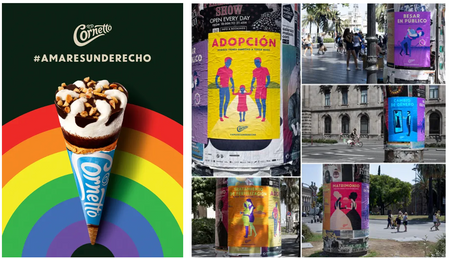 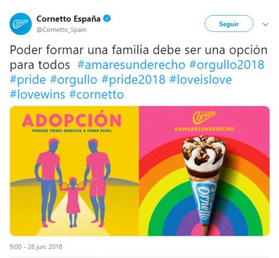 The agency Lola MullenLowe in Barcelona was responsible for the campaign.

Cornetto has done some varied LGBT-themed campaigns over the years. Surprisingly, many of the video's and images were produced for the Asian market and most of them were not related to Pride events, which is usually the case. However, some led to controversy, others were mostly done for fun without any support for the community, like a charity. Cornetto scores a 7.

This summer… Italy, 2021
Can a television commercial in which two girls chat on a couch for a fraction of a second still arouse outrage in 2021? According to a tweet that went viral, yes.

The accompanying song L'Ultima Notte is by the openly queer singer Ariete. In the clip, we see several young people. For a moment, the camera's focus is on what appears to be two girls sitting on a bench. One rests her head on the other's legs, in a pose of tender intimacy. In short, moments of normal life, an adjective that should be proudly claimed, because the girls do not represent anything abnormal or far removed from today's society, especially from Generation Z. Small controversy, then. 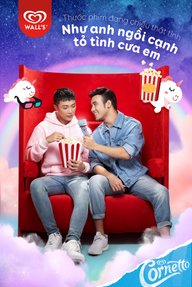 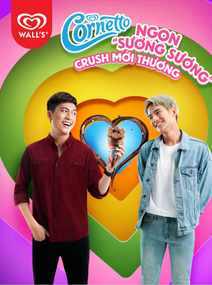 "Youth is like a cup of tea, Love wrapped in ice cream🍦" Under this motto, social posts were made in Vietnam

🤭Have you ever liked someone but didn't have the courage to flirt and reply "I like him"?
🤭Have you ever seen your crush's chat frame turn blue, then your heart runs around?
If the answer is yes, why not try to invite your crush to eat a "Delicious" Cornetto!

The most magical moment is when your crush opens up and enjoys your ice cream so that you don't have to officially confess but "everybody knows who" secretly understands.