Orbitz is a U.S. company that operates a web site used to research, plan and book travel. It is headquartered in Chicago, Illinois. Late 2015 competitor Expedia acquired them for $1.3 billion.

“A lot of people in marketing want image. I want a brand that drives business.” So said Randy Susan Wagner, CMO of Orbitz, with the kind of frank focus that characterizes many of the strategic changes she brought to the online travel site since assuming her post in May 2005 (until 2008). Under Wagner's tutelage, Orbitz won the loyalty of travelers (her Ph.D. in educational psychology was no doubt useful to this end). For example, Orbitz.com went out of its way to personalize its services for highly specific consumer profiles - such as mothers with children. And for more than 20 years, Orbitz has been a trusted friend to the LGBT+ community

A television commercial unveiled during the July 15, 2003 episode of Bravo's Queer Eye for the Straight Gay is reportedly the first-ever TV spot to include unambiguously gay representations in a mainstream pitch to gay consumers.

Orbitz’ ad features male and female marionettes standing on the balcony of a hotel room booked by a travel agent. The woman comments on the beautiful view, and the man, spying a muscular male sunbather at the pool, heartily agrees.

"We didn't see it as a risk, we saw it as an opportunity," said Jeffrey Marsh, director of marketing strategy for Orbitz. "We're getting a great response. Consumers have been very supportive. Some are calling it groundbreaking."

The “Orbitz Matrix Display” video (a Thunderbirds-like animation) had a special gay version, which ran on channels like LOGO. The two ads are virtually the same, but the “straight” ad has the spokesman checking out a scantily clad woman while the LGBT ad has two men holding hands and checking out the spokesman, among other subtle differences. Although this diversification was applied by others as well (Levi Strauss for instance), some sources have criticized it for being non-inclusive, but separatist instead. I guess you just cannot please everybody.

The ad did win the GLAAD Media Award in 2004 for outstanding advertising and Orbitz received the Commercial Closet Association’s Corporate Visionary Honor in 2006. In 2009 their “golfer” spot won the GLAAD award again. The four men in the ad were allegedly gay, but might as well have been straight friends. Interesting was that one of the four did have the HRC logo on his polo shirt. 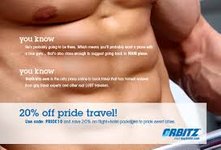 Fast Company observed: “Most big, mass-market companies won't come anywhere near social issues, for fear of the protests and counter-protests and fake controversies they spur. So it's rather amazing that Orbitz, in its current ads, makes a very subtle nod to the gay-rights movement.” Later ads were much more explicitly gay, after the Mullen agency took over the $ 61 million account (in 2006-2009).

Note: they were one of the few leading brands in the world with the word "gay" on the homepage! (sadly, no more)

Orbitz also endeavoured to ‘give back’, by supported LGBT charities via their Travel Auctions and advertising their LGBT friendliness. In 2006 Orbitz unveiled two new TV spots that featured OrbitzTLC Mobile Access - a new service that enables stranded travelers to book a hotel room in the event of weather-related flight cancellations. 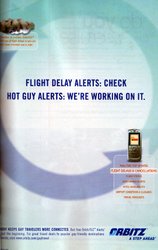 A gate attendant announces to a throng of passengers that their flight has been canceled. Game show personality Wink Martindale then kicks off the Orbitz Challenge between two couples who try to book a place to stay before the other 200 people on their canceled flight gobble all the available rooms. One couple fumbles through a phone book, but the Orbitz couple logs onto www.Orbitz.com and takes just seconds to book a room by clicking one of the hotel options displayed on their cell phone's Web function. A second spot uses the same scenario and targets gay travelers by pitting a lesbian couple against a heterosexual couple. The gay couple book their room in an instant and celebrate with an onscreen kiss. The ad concludes by showing the losing couple bunking on airport cots and flashes the tagline "Orbitz and go." 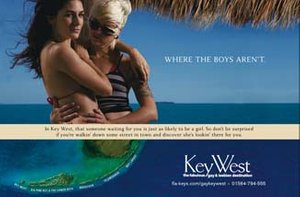 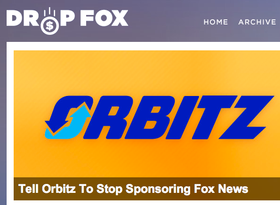 However, as Orbitz found out, courting the LGBT customer does come with a responsibility. In 2011 leaders from Courage Campaign, GLAAD, Equality Matters and Media Matters called for Orbitz to pull its advertising from Fox, saying that prominent Fox commentators are anti-gay and because of the network’s anti-gay content – with comparisons of homosexuality to pedophilia and drug use, false claims about Don’t Ask Don’t Tell, and anchor Bill O’Reilly making ridiculous claims about “dangers” of homosexuality and gay marriage.

After nearly 200,000 people signed the letter urging Orbitz to reconsider its advertising choices, Orbitz finally altered its position. “Orbitz has heard from the LGBT community about its concerns that its advertisements appear on programs which have objectionable content,” said Brian Hoyt, vice president of communications and government affairs for Orbitz. “In the coming weeks, Orbitz will conduct a review of programming on the full range of media we buy. We will also evaluate the best practices among other companies who share our core values to see what approaches they use when evaluating media placements.” In the statement, Orbitz was quick to note that for several years they’ve earned a perfect score of ‘100’ on the HRC Corporate Equality Index.

Note: the AFA affiliated NOM responded to the action to urge Orbitz to withdraw its advertising from FOX with the headline “Gay Leaders Try Bullying Orbitz to Drop FoxNews”.  I have underlined the qualification “Bullying”, as the conservative group to which NOM belongs has undertaken scores of identical campaigns themselves - apparently justified, and not qualified as bullying. Interestingly, NOM also suggests that the gay community has Leaders... 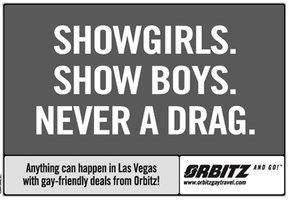 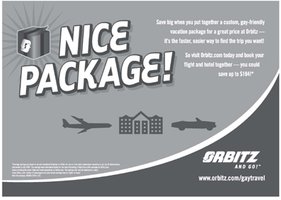 Of course, word play was used in a number of ads, such as "Nice package" on the left. Interestingly, the pay off "Never a drag" was more or less contradicted when Orbitz hired drag queen Ms. Richfield 1981 as the icon in a number of ads. 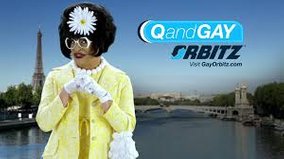 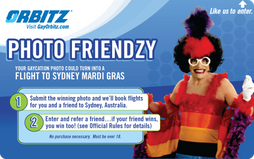 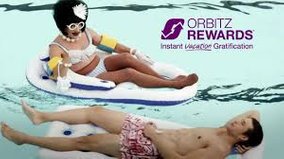 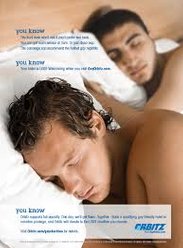 In my research survey, whenI asked if their campaigns also had negative effects, I got the response: “Orbitz receives emails and phone calls on a regular basis from people who are not happy with the fact that the brand has LGBT-inclusive ads or advertises on LOGO, the gay channel by MTV networks. Regarding negative feedback, it is expected and we respond with the following: As a matter of policy, Orbitz does not discriminate against any person, regardless of age, gender, sexual orientation, or religious belief. We are proud of our inclusive employee and marketing policies and practices. This inclusive stance allows us to hire and retain the most talented professionals in our industry and appeal to a broad and diverse group of travelers.”

In 2015, Orbitz published a 'blog' called Marriage Equality and Orbitz, in which they outline the developments of same same marriage around the world (starting with the Netherlands in 2001), alongside their own LGBT highlights: from winning the GLAAD award for Hotel Matrix, via New Boyfriend (one of the 50 gayest ads, according to Adweek), the corporate partnership with HRC to the 2015  signing of the  amicus brief submitted to the Supreme Court in support of marriage equality.

In 2021, Orbitz becamse a Global Partner of the IGLTA, and celebrated that with a joyful video.

In 2020 they launched a special new microsite for the LGBT travellers. This happened in the midst of the corona crisis, when research found that LGBT would be likely to start travelling sooner than the mainstream population (just like they were more optimistic during the crisis that started in 2008). Next to

lists of hotels that are hospitable to the LGBT community, the site will include travel guides and advice from diverse travel experts and queer influencers; Orbitz says further enhancements will roll out later this year and into 2021.

Their website states: "We believe that all travelers should have the freedom to be who they are, wherever they are. That’s why we commit a portion of our brand budget each year to support charities and causes that support and advance equality for the LGBTQIA+ community.

Through our Freedom to Be giving program, we’re committed to supporting vital community organizations, foundations and charitable partners, which include the likes of The Trevor Project, Trans Lifeline, IGLTA Foundation, Stonewall Community Foundation and Black Trans Travel Fund."

Early 2019 Orbitz released the results of a Pride-Friendly Travel Survey they did, among other things to show the top 10 Destinations for 2019 Pride Events (1. Provincetown, 2. St. Petersburg, 3. Atlanta, 4. Long Beach, 5. New York City, 6. Minneapolis, 7. Columbus, 8. Miami, 9. Houston, 10. San Francisco). Ellen DeGeneres topped the list of celebrities that travelers would most like to attend Pride with (31%), followed by Lady Gaga (24%) and the cast of Netflix's Queer Eye and the Obamas tied for third (both 15%). 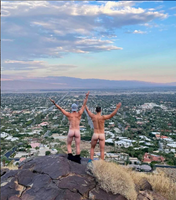 For Valentine's Day Orbitz teamed up with RuPaul's Drag Race star Jackie Cox and Instagrammers @thetravelinbum to "guide viewers on a vicarious tour around the globe, prompting inspiration for when the time comes to travel again." The Travelin Bum is an Instagram account that shows bare-skinned backsides in dreamy destinations around the world, which inspired Orbitz to change its name to "Orbuttz" for Valentine's Day. They also donated $10,000 to the Stonewall Community Foundation

Orbitz has been a long-time ally and consistent supporter of the community, and a number of related charities. Their campaigns and communications have been diverse, respectful and fun. I rate them 9/10 for

To expand the reach of the campaign, the influencers posted stories to Instagram with additional recommendations throughout the month, marking them with the #HappyPlace hashtag. Orbitz invited people to share their recommendations with the hashtag for a chance to be featured on its Instagram account. They donated $5,000 to The Trevor Project.

In celebration of Pride month, Orbitz rewarded the passionate team of volunteers at Identity Alaska - the organizers of the successful "mini Pride" of Anchorage - with a cross-continent trip to Miami Beach Pride for a weekend of celebration and connection.