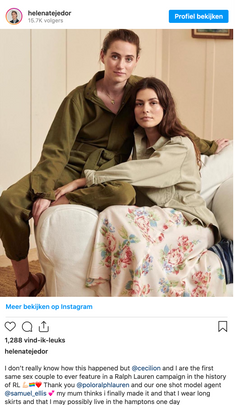 It took Ralph Lauren (RL) all the way to the Spring 2019 campaign to feature their first same-sex couple in a commercial. The theme and title of the campaign was “Family is Who You Love,” and it features footage of real-life couples and families from racially diverse backgrounds. One of the couples is a young lesbian couple who happily chat, repeatedly touch each other’s faces and necks, talk in bed and the hug while spinning around.

According to Ad Age, “Polo Ralph Lauren has been trying to attract younger consumers” and so their ad may be an attempt to do just that. "We live in a world where the meaning of family is bigger, broader and more personal than it has ever been before,” said Jonathan Bottomley, chief marketing officer of Polo Ralph Lauren. “We believe that family is one of the most positive forces and powerful unifiers for all of us today, and this campaign is a fresh expression of that idea.”

The website also has a special section, including same-sex couples.

In 2020, during the 'corona virtual Pride season', RL partnered with Stonewall Community Foundation, an organization investing in dynamic organizations, projects, and leaders. They "lift up those who experience the greatest vulnerability within the queer community, including communities of color and transgender, gender-nonconforming, and nonbinary people."

They also sponsored them.’s "Out Now Live". Them. is "a next-generation community platform" by Condé Nast. 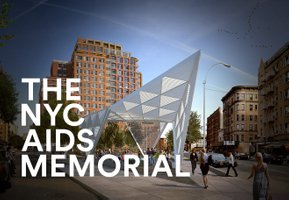 For 30 years, RL and the Ralph Lauren Corporate Foundation have supported the LGBT+ community through volunteer activations, corporate initiatives, and financial grants. One of the first such initiatives was sponsoring the AIDS Walk New York since 1990.

RL employees have volunteered at the Harvey Milk High School (New York), a public high school designed for, but not limited to, LGBT+ youth. They helped decorate the school's prom and helped paint adjacent facilities at the Hetrick-Martin Institute, the "oldest and largest organization helping LGBTQ youth to reach their full potential" in the US.

RL scored 100% on the 2020 Human Rights Campaign’s Corporate Equality Index, earning the designation of Best Place to Work for LGBTQ Equality. This was a result of their initiatives launched in 2019, including the expansion of equitable benefits such as domestic partner recognition, transgender-inclusive benefits, and the launch of the LGBT+ employee community, led by Tom Mendenhall, president of men’s Polo, World of Denim, Double RL, and Childrenswear, and executive sponsor to the #RLPride RL Community. 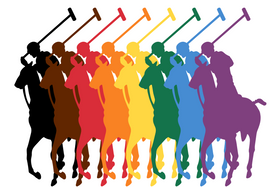 For a number of years RL released a "gender-neutral Pride capsule collection", featuring both rainbow branded items as well as celebrities. In 2019 Gus Kenworthy was one of them, in 2020 the campaign was supported by i.a. Dan Levy, Indya Moore, Jeremy Pope and Heather Kemesky. You can see the campaign video here. The 2021 collection featured a line of stylish, white polo shirts with an elegant rainbow collar, while they also announced their first Pride eyewear campaign.

For many of articles, one hundred per cent of all proceeds went to the Stonewall Community Foundation, coinciding (in 2019) with Stonewall’s 50th anniversary. 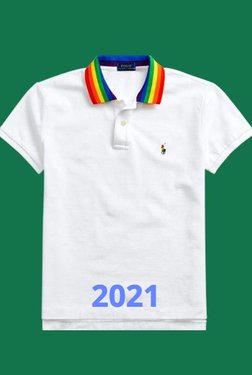 Gus also worked with Ralph Lauren for Polo Blue Men of Gold in 2019.

In 2015, their Foundation helped support the establishment of The New York City AIDS Memorial, a tribute to the 100,000+ New Yorkers who have died from AIDS and the community that has shared their struggle.

In 2005 the brand worked with Chris Beckman, an openly gay member of the Chicago cast of "The Real World" on MTV Network, in the campaign Get Involved. Volunteer. Exceed. 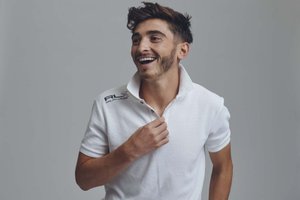 Football player Josh Cavallo was offered a global launch with Ralph Lauren for their new RLX CLARUS® polo shirt. This was announced just after the homophobic abuse he suffered, following his coming out in 2021 and days after enduring hate speech at a match against Melbourne Victory. Sydney Morning Herald: "The homophobic slurs hurled at Josh Cavallo at Melbourne’s AAMI Park on the weekend have been drowned out by the deafening support of US fashion brand Ralph Lauren." Bob Witeck told NBC News, “Sexual orientation is a differentiator that makes the brand popular with younger generations in ways they could have never imagined before. It suggests the company and the brand are welcoming, inclusive and reflect the generation of today.”

Cavallo posted on his Instagram: "I’m here to bring change, change for the better". “Ralph Lauren strives for diversity, inclusion and respect for human rights across their business and in society so the connection with my coming out story and their values is something that attracted me."

Ralph Lauren increased its sponsorship arrangement of the Australian Open (i.a. as the official outfitter of the 4,000 staff) and extended its partnership to the AO Glam Slam, the world’s first LGBTQI+ tournament integrated into a Grand Slam event.

Ralph Lauren Corporation (RL) is an American fashion company, known for products in four categories: apparel, home, accessories, and fragrances. The Company's brands include Chaps, Lauren, Polo, Double RL, up to the full luxury Ralph Lauren Purple Label and Ralph Lauren Collection brands. The company is headquartered in New York City, and founded in 1967 by American fashion designer Ralph Lauren. His net worth is over $6 bln.