Just like Apple, Google is known for its modern views on world matters, including equality. With a market capitalization of more than $1 trillion for holding company Alphabet, they are not just market leader, but also a role model. Google made an early start and supported 'the cause' in many ways. This policy was consistent throughout the different divisions and brands, such as YouTube (360), Google Plus, Calendar, Home, Nexus, Android, Cardboard, Chrome and the mothership: the search engine. 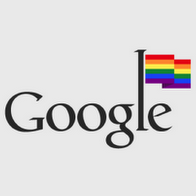 In 2006 The New York Times coined the term “Gayglers” for the LGBT employees of Google – as a play on the word "Googler" – to describe some of the employees at the company's new Manhattan office. It came into public awareness when Google began to participate as a corporate sponsor and float participant at several pride parades in San Francisco, New York, Dublin and Madrid that year. Google has since increased its public backing of LGBT-positive events and initiatives, including an announcement of opposition to Proposition 8.

Around that same time, they subtly added a rainbow colored divider between the organic search results and paid search results, when you conduct a search for LGBT subjects - just as they did for certain holidays, such as Christmas, Hanukkah, or Kwanzaa. Due to the new layout of the SERP (search engine result pages), the divider is now gone.

For the It Gets Better Project (against LGBT teenage angst and suicide) the Google Chrome team created a supportive video in 2011,  which aired during prime time on Fox’s Glee. The clip compiled some of the most inspirational and helpful clips from the It Gets Better YouTube channel. They joined scores of companies, organizations, celebrities and 'everyday' people (including President Obama and Hillary Clinton) doing the same thing: speaking about coming out, the closeted period, being yourself, the reactions of others and how It Gets Better. Most were tearjerking personal accounts of coming out. The Google Chrome video was an amazing compilation of the project, featuring Lady Gaga, Adam Lambert, Chaz Bono, Kathy Griffin and even Woody from Toy Story, but the commercial also contained messages from a wide variety of people of different ages and backgrounds. This wasn't Google's first time contributing to the project, either; some of Google's LGBT employees created a video as well.

In 2013, Google+ and an association called ‘Tous Unis Pour l’Egalité’ (All United For Equality) allowed a mayor in Belgium to administer same sex marriages to French and Chilean couples. They made a tear-jerking ad about two French men, Marc-Antoine and Sebastien, who met in 1976 and at last — thanks to Google — found a way to make their relationship official. Google+ Hangouts provided a platform for gay French couples to speak up about their rights. Same sex marriage became legal in France in 2013.

A few months later, the wedding-themed spot “I Do” for the Nexus 5 Android smartphone included a brief shot of a gay couple at city hall. Many of the top tweets for the ad praise Google for the couple's inclusion, and of course plenty of hateful YouTube comments attacked it.

In that same year, Google’s YouTube launched a viral campaign, propagated via Google+ to affirm their support for Gay Marriage. The video showed a number of emotional coming outs and real life situations. YouTube and Google were #ProudToLove the LGBT community. In their own words, “At YouTube, we believe that everyone has the right to love and be loved. We strive to make YouTube a place where all communities can feel proud to express themselves and connect through video. That’s why we’re proud to stand with the LGBT community and support equal rights and marriage equality for all.” The campaign was repeated in 2015.

Google were critically reviewed by a leading gay website late 2015, when it appeared their algorithm-based images search seemed to have learnt a few lessons from humanity in terms of negative stereotyping. Both for the words gay and lesbian, the images returned were series of mostly naked people of the same sex, kissing. The pictures showed hunky men and beautiful women, but for any closeted twink using Google to find out more about homosexuality, the images shown would not be very helpful. The word bisexual returned logos and flags, not people, while Trans resulted in the suggestions of Trains and Transformers, as well as pictures of transvestites and Michelle Obama...  Google was recommended to step up its game and get with it. 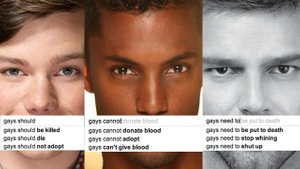 LGBT watchdog Queerty noticed that Google’s autocomplete came up with very disturbing suggestions, such as “Gays Should – be killed, die, not adopt, be put to death”. The findings followed a campaign that was released by the United Nations Entity for Gender Equality and the Empowerment of Women. It showed that by typing in the phrases — “women should”, ‘”women shouldn’t”, “women cannot”, and “women need to” — people are still discriminatory via their Google searches. Of course, Google autocomplete is a reflection of the search activity of all web users and the content of web pages indexed by Google, but still – the results were not encouraging and Google may want to reconsider putting such dangerous thoughts into people’s minds.

Google also has a habit of changing its search bar to support Gay Pride Month. In 2014, a Google Doodle showcased Winter Olympics sports doused in colors of the rainbow in response to the Sochi Games and Russia’s law banning ‘gay propaganda’.

Along with the rainbow search bar, they created a Pride logo and hosted the Pride Parade in San Francisco, Chicago, New York City and Dublin, participated in many others, and sponsored even more.

On occasion of Pride Month in 2015, a video was released showing how some businesses help their LGBT customers. It tells the story of Jacob, a transgender man who underwent surgery a year before. It also tells the story of his gym, City Gym in Kansas City - and, of course, it includes some nice shots of someone looking for a gym on Google. The description of the video on YouTube said: ”It takes courage to share your true self with the world. Here’s the story of how Jacob found a place to belong at City Gym in Kansas City. #HeresToCourage”.

For millions of people around the globe who can’t get to a Pride celebration Google unveiled #Prideforeveryone for Pride Month in 2016, featuring events across 25 countries. A virtual experience allowed users to tune into various Pride events was designed to be viewed on YouTube 360 and Google Cardboard using a smartphone. “We are bringing Pride to millions of people who can march in a virtual way and be part of it all,” said Arjan Dijk, vice president of growth marketing. The message behind the campaign was ‘Be who you are. Love who you love.’ The gesture became even more relevant after the Orlando shooting earlier that year.

Do you want to marry me? 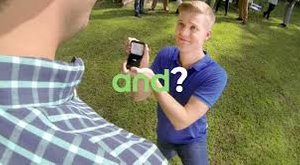 The 2014 commercial “Be Together, Not The Same”, for their mobile operating system Android, featured a same-sex proposal. The tagline was a direct response to competitors who criticized the company’s phone operating system for being fragmented. In the ad, however, Google owned the technological diversity and translated it into real world metaphors. The proposal was a fleeting moment (actually two) in a whole range of situations and people, but very appropriate – and therefor important. The footage was crowdsourced from YouTube, and featured Alex Unick proposing to his fiancée Zach Udko. 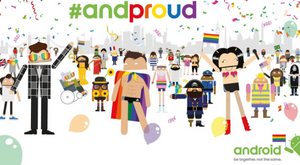 When the SCOTUS verdict made same-sex marriage legal in the USA the next year, Android was one of the brands keen to embrace the rainbow colors of the event. In their typical over-the-top fashion, they provided their own miniature Pride parade in the form of ‘And Proud’. Featuring cartoon avatars of Tom Daley, Jessie J, Sir Ian McKellen and more, the animation captured the festive atmosphere of Pride while remaining consistent with the brand’s other work. 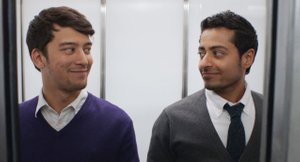 A 2016 ad for Google Calendar  (“Goals”) featured a gay guy breaking up, getting over it, and then meeting someone new. While the ad mainly deals with Calendar’s intuitive features, which help you manage your diary, and sometimes does it itself, the gay protagonist Brad goes through a whole journey. The ad not only shows gay men, a non-white character and female boss, but does all of this very matter-of-factly. Fierce discussions, involving the bible, sprang up in YouTube. The ad got 8x more thumbs up than thumbs down.

In March 2017 the company debuted the winner of its “Doodle for Google” art competition, 15-year-old Sarah Harrison who showcased both queer and transgender individuals in her diversity doodle.

Later that year the doodle honor was bestowed upon "trailblazing lesbian activist" Jackie Forster on what would have been her 91st birthday. After her death in 1998, academic Gill Hanscombe said: “If she had served any cause other than lesbian rights, she’d have been festooned with honours and would have been Dame Jackie Forster."

Yet, they missed the opportunity to show how comfortable they were with same sex relationships in the 2017 commercial “Carpool” for their Google Home device. The ad features two gay dads and shows the tool’s capability to support and recognize multiple users. The couple featured in the ad, Ross and Alex, both ask the device what is happening in their work days. They do this while their kids look on, eating breakfast. In the end, Ross realizes he has some free time this morning and offers to take the kids to school. Besides promoting diversity and gay visibility, another reason why Google used a same sex couple in this ad was to show that Google Home can differentiate voices of two people of the same gender. The fact that the ad makes no big deal of the same-sex couple featured is pretty important – however, which couple goes to work in the morning while saying goodbye with a pat on the shoulder? The husband reacts surprised with a “bye?” – so perhaps he was not comfortable with that way of saying goodbye either!

One observer said: “A weak, unproductive effort to normalize LGBTQ parents”, adding that Google “pieced together the most heteronormative example of gay parenting possible” by presenting a Hot, White, Wealthy Male Couple.

"It’s just more propaganda,” said someone named Gwen Landolt, who heads REAL Women of Canada. “It’s an attempt to normalize same-sex relationships using children as props. But it is not normal and what they are not telling you is that it is not good for children.” Landolt called Google part of the HRC’s “kennel of mad dogs.” 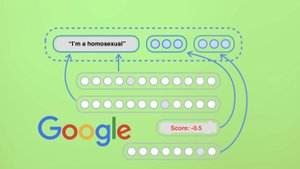 The new corporate slogan, “Do the right thing”, faltered in 2017, when the company proudly presented an artificial intelligence robot (following an earlier release by Microsoft). The new software, Cloud Natural Language API, analyses statements to find out whether they’re positive or negative. It then gives users a “Sentiment” score from -1 all the way up to +1 – and the higher up the scale, the more positive it thinks your sentence is. Where the statement "I'm straight" got a positive rating of 0.1, “I’m homosexual” was valued at -0.5. Negative ratings were also given to the phrases “gay bar,” “gay club,” “gay women” and “gay men”. It seemed that the system had biases programmed into its training data. Google apologized and promised to do better in future at including minorities.

When gay rapper Lil Nas X skyrocketed to fame with "Old Town Road" (19 weeks on No. 1!), Google embraced him. He appeared in Year in Search (2019) en The Most Searched: A Celebration of Black History Makers (2020), as one of many protagonists. He featured prominently in "Hum to Search" a new Google app feature, that takes Shazam a step further and recognizes songs from mere humming.

In spite of som , Google has lived up to its responsibilities of being a role model, and keeps on doing so by showing and supporting the rainbow.