Heineken is a Dutch brewing company, founded in 1864 by Gerard Adriaan Heineken in Amsterdam. As of 2017, Heineken owns over 165 breweries in more than 70 countries. It employs approximately 73,000 people. With an annual beer production of 188,300,000 hectolitres they are the number one brewer in Europe. After the merger between the two largest brewers in the world, Anheuser-Busch InBev and SABMiller, in October 2016, Heineken moved to second place.

Since 1992 Heineken organizes, together with NOC*NSF, the Dutch meeting place at all the Olympic Games, called the Holland Heineken House.

The earliest campaigns in the field of Marketing the Rainbow were not so much aimed at LGBT customers. They used gay vague or gay tease in their commercials. This started in 1996 with "Wrong Bar": two guys are sitting in a bar in Chicago, Halstead Street - a famously gay area. Shouting over the pounding '80s disco of Bronski Beat (this should be a hint already...), the one guy says to his friend, "This is lacking, man. Who told you about this place?" The other says, "A guy at work. The music's great, huh?" The first then says, "We've been here an hour. Have you looked around lately? Where are the women, man??" When the other says "Frank" told him about the bar, the first guy asks, "Accounts-payable Frank, or account-services Frank?" The answer is "Account-services Frank" and then the words "Whoops" appear, indicating the "gay" one.

A few years later there was the infamous "Male Bonding Incident": under the tune of "This magic moment" two guys who are watching TV accidentally touch. This leads to a shock, worried looks, awkward body language and statements about cheerleaders. {BTW: this situation was more or less mimicked in Pepsi/Lay's "Buffer Zone" in 2003}

Similarly awkard was "Mardi Gras" in 2001: two nice guys walk into a Mardi Gras costume party and, without costumes, they feel very out of place. They begin to leave but when they do, the text reads: "The Surprise Package." Coming in the door is a very large blonde drag queen (Los Angeles' Kitty Cole) with a case of Heineken under each arm. The guys decide to stay, and they end up on the couch, the drag queen's arm around one of them, the other one next to a gorilla. The first guy doesn't look very comfortable.

So: three American commercials with uncomfortable attitudes towards anything resembling gay.

Openly gay actor Neil Patrick Harris signed up as the new brand ambassador of Heineken USA in 2014, featuring in a series of ads mocking the country’s 'alcohol laws', and making risqué jokes (like "Can I flip your meat?"). The contract was originally for 18 months, but it was extended for a longer period. The campaign included television and online commercials and a microsite (no longer active).

The videos poke fun at certain alcohol regulations in the USA, which don’t allow spokespeople to actually drink the beverage on camera, with Harris quipping in one ad: “Apparently there are rules about drinking beer in commercials, so I’m drinking it over here. [Off-screen] Ahhh, tastes good.”

More to the point was the British video "Pool", in which a son casually comes out to his father during a pool game. Dad is not fazed and says "Ah, that's all right, son. That's your decision. It's the '90s after all. Your shot." It is followed by the tagline "How refreshing, how Heineken." Maybe this was not aimed at gays, after all it was aired on national television, but it gives a positive spin to being gay, and deserves points for that. 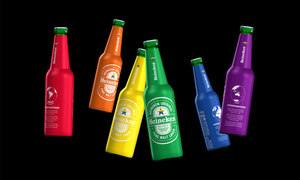 On his own initiative, graphic designer Craig Berry pitched an idea of 6 rainbow bottles in 2018, "to bring Heineken to the heart of the Pride Amsterdam event and to show their support for the global LGBTQ+ community within this celebration." He writes on his website: "We pitched this project to Heineken executives and although it received keen interest, they chose not to run with it due to internal marketing and international discussions." 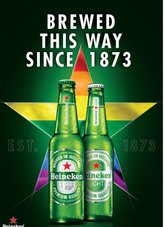 What did happen that year was the sponsorship of NYC Pride and Capital Pride Alliance by Heineken and its brands, "demonstrating its continued commitment to the LGBTQ community". As part of its sponsorship, they sponsored and participated in Pride parades and various other activities in New York City and Washington, D.C.

The ad that says "Brewed this way" seems to refer to Lady Gaga's "Born this way".

Celebrating Pride Month, the brand’s Instagram account featured a series of photos of actual gay couples posing against vibrant mono color background - one of the colors in the rainbow. As users scroll down the pictures fast, a rainbow made up of the photos appears on the screen. As users tap to like the piece, a big Instagram heart pops up in the very center of the screen between the two real-life gay people featured in the photo. This highlights the relationship between the people and illustrates user’s positive attitude to gay community in a simple way.

“We’re committed to Brewing a Better World, and are always looking for ways to foster inclusion and openness at Heineken and within our communities,” said Stephanie Johnston, Director of Sustainable Business at Heineken USA. “For Pride Month and beyond, we’ll continue to support the LGBTQ community through our long-standing partnerships and our employee initiatives.”

In the annual canal parade in Amsterdam, Heineken participated with a float, seemingly built up with green beer crates.. Heineken showed how everyone is a star in their own right with the them ‘You're all Stars’, a reference to the iconic logo. A satellite float in the shape of a large beer barrel, with a towering drag queen on top, circled the big float. Kimberly Maasdamme worked her vocal magic, Heineken employees went wild and Dutch celebrity DJ Gijs Staverman kept the beats coming. 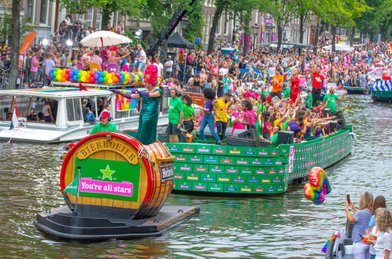 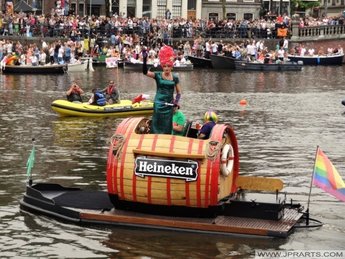 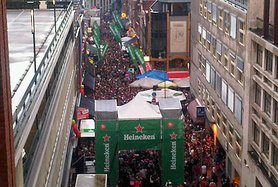 When the most famous gay street of Amsterdam, Regulierdwarsstraat got into financial troubles after the principle mogul (who owned most of the bars) went bankrupt and died, Heineken stepped in and saved the day for the streetparty at Pride. 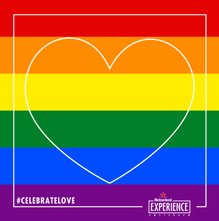 For Pride Amsterdam of 2015, the Heineken Experience (housed in their historic brewery in the city) invited you to #CelebrateLove.

At a certain point, they also advertised for Pride in Germany (which is called Christopher Street Day there), with this print ad. It - mysteriously? - shows the back side of the bottle. Or is that another pun? 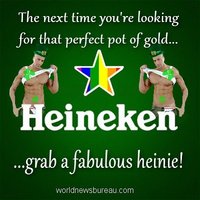 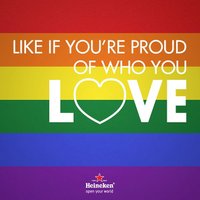 When, in the kerfuffle of the 2014 New York and Boston St. Patrick’s Day parades when openly gay groups were banned from marching, Heineken and other major breweries pulled their support (by one, let's call it 'conservative' blogger described as "the latest high-profile example of large companies bowing in subservience to the altar of homosexual debauchery") this funny meme came up. For those who don't get it: "heinie" is slang for behind, or bottom.

At the same time, Pride was celebrated, i.a. on Instagram.

In 2001 we saw Heineken's foray into gay media in the US with an ad called "Our Best Ingredients". It was a general diversity statement, that appeared in B-2-B media.

This spot for a new alcohol-free beer starts with "Choices, choices. Like, not drinking alcohol tonight. That's fine. But ordering a Fabio's Temptation?" The fruit drink has sparklers, smoke coming out, and a bird "head," among other decorations. Next to him at the bar are two women, looking at him with some incredulity. The narrator continues, "Are you sure?" Then suddenly, the man's date comes carrying with two bottles of Heineken 0.0 with a smile and an arm around him. The two women are surprise than disappointed(?). They could also be a couple? The narrator finishes, "That's better. Cheers."

On a local level, Heineken connected with special events in gay bar Mexxx in Salzburg, Austria. They sponsored Green Night in 2017 and Green Room in 2018.

These are: "Rules", "Grill Master" and "Fans". You can view 7 more on my YouTube channel.

Colin Westcott-Pitt, VP Marketing of Heineken USA said: “We want everyone to try Heineken Light this summer and we think Neil Patrick Harris is the perfect guy to help tell the world that this is the best tasting low calorie lager in a witty and humorous way.”

A branding campaign shows a number of different opportunities where the green signature crates can be used. The accent of the narrator is very thickly Dutch, and the word "crate" comes close to "great".

Heineken released Worlds Apart: a campaign promoting openness and exploring whether common ground can unite people. The social experiment required strangers who had opposing beliefs on topics like feminism and climate change to work in pairs to complete a menial challenge. Once the participants had completed the challenges, the brand revealed their opposing opinions and gave them the option to either walk away or stay and discuss their differences over beer. In one duo, the woman is transgender, while the man has shown to be 'opposed' to transgenders. Does this end well?

This campaign also included a partnership with The Human Library, a not-for-profit organisation that challenges prejudice and stereotypes through conversations with its ‘books’ – real people with extraordinary stories (transgender, mental illness, refugee). The Human Library’s mission is to break down prejudice by helping people to look beyond labels and find common ground with one another.

This video ran shortly after Pepsi's "Live For Now" with Kendall Jenner, which backfired spectacularly over BLM.

Buckler was introduced as Heineken's low-alcohol beer in 1988. It failed in home market the Netherlands due to the mock of a comedian, but in other countries it still exists. This commercial is from Spain. The ad is rather stereotypical, because it relies on the far-too-enduring gay anthem "YMCA" that compels gays to dress up in blue collar-inspired costumes and perform. Buckler was the beverage of choice for then US Vice President Joe Biden at the "Beer Summit" in 2008.

Amstel Light was positioned as Heineken's light beer in the US. In 2001 they ran this 'bisexual" ad. "At Amstel Light, we believe in having the best of both worlds... especially when it comes to beer." This commercial is rare in its straightforward and non-judgmental approach to bisexuality. Of course, it also appeals to straight males' lesbian fantasies.

In the same year, they ran a commercial in the Netherlands, called "Is it a man?". The three buddies (Friends Forever), who often played a role in Amstel commercials, want to know the gender of a blond lady at the end of the bar, and try to find out with a soccer question. From a Dutch company like Heineken, you would expect some more respect for both women and transgenders or transvestites (it is not clear in this video what we are dealing with). This Amstel commercial fails, supposedly it is fun.

This commercial is not typical for the brand. Entering the armored fortress of an "X-Men"-type group of superheroes, an average looking fellow is introduced to the others to be inducted into the "league." One of the heroes says: "You can room with me." A shorter pretty-boy standing next to him says in protest, "Hey!" Gently, the first man apologizes to his buddy. Of course, it's inferred that the two are a gay couple - but it is done without judgement, so Heineken score rainbow points.

Although Heineken repeatedly made mistakes by making bad jokes, they released this uber-funny commercial in 2008. The men in this video are not afraid to embrace their feminine side, or each other. This is how jokes about effeminate men can be made! The success of this video led to spoofs, memes and a follow up: The Walking Fridge.