Calvin Klein has been an openly gay (or at least bisexual) fashion designer and his success and approach to marketing made him a - disputed - gay icon of sorts.

Klein has long been known for his attention-getting advertisements. He first made a name for himself by designing clean, uncomplicated sportswear. But he kept his name before the public by creating sometimes shocking and always news making advertising campaigns. After all, if you are promoting underwear you have the right, if not the obligation to show near naked models…

The first order was obtained purely, and ironically, by accident when a coat buyer from Bonwit Teller got off on the wrong floor of a hotel and wandered into Klein's workroom. She placed an order for USD 50,000, which was a huge amount at that time. By 1997 sales of Calvin Klein Jeans approached half a billion dollars. 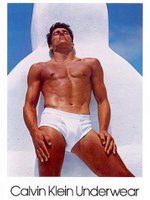 It’s been over 30 years since a bold and beautiful 1983 Times Square ad featuring Olympic athlete Tom Hintnaus posing in his Calvin Kleins… which revolutionized the advertising industry, if not the Klein signature. For the first time, men were allowed to be as sexy - and sexually overt - as women in print adverts, thanks to what was then considered a risque visual from photographer Bruce Weber. He became most widely known for his CK campaigns but also worked for Ralph Lauren, Abercrombie & Fitch, and Gianni Versace. 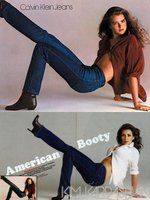 Advertising was a key to Klein's success. He stoked the media with controversy that kept his name in the news. He was the first to design women's underwear that looked like men's jockey shorts. His television ads for jeans starred child-star Brooke Shields, who exclaimed: "Nothing comes between me and my Calvins."

Fun fact 1: 30 years later, the actress claimed that, after two children and three decades, the jeans still fit her.

Fun fact 2: in 2008 the ads were ‘copied’ by present-day star Kim Kardashian for Radar magazine. In Brooke’s case there was talk about exploiting a teen. Kardashian biggest claim to fame was a leaked sex tape. We have come a long way.

CK developed a reputation for pushing the envelope of acceptability in his campaigns. Ads of the mid-1990s featured underage teenagers (not professional models) in sexually provocative poses that were particularly risque, and were characterized by many as socially irresponsible. Dubbed "kiddie porn" by the press, the campaign was singled out by Forbes magazine as the worst marketing campaign of 1995. He even attracted government attention: the FBI and Justice Department investigated the company for possible violations of child pornography laws. The ads were universally denounced, but in the end, the Justice Department ruled that they were not pornography. And, yes, Klein pulled the ads, but not before the accompanying publicity had made the Calvin Klein brand name a part of everyday conversation.

The success of crotch grabbing

In the 1990’s Klein ran the print ad of Marky Mark in his body-hugging underwear in Out magazine. It's the ad you could also see on poster boards on New York streets or in any of the glossy national magazines.

Klein again attracted a great deal of attention when he and Bruce Weber created a new medium, the 115-page "outsert", a campaign incorporating rock and roll, grunge, and waif models as well as the homo-erotic and cynical-chic images of drug use. The outsert was distributed in a few major cities and featuring a fictionalized hard-body rock band and their sexily clad girlfriends, which ran in the October 1991 Vanity Fair. There were some boy-meets-boy and girl-meets-girl shots that were sexually suggestive. 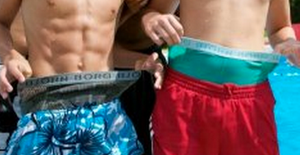 If you thought your hipster kids were innovative by wearing half of their Björn Borg boxers sticking out of their jeans, think again. One of the first underwear brands to print their name clearly on the waistband of the briefs was Calvin Klein (CK) in the early 80s. Subsequently, they also wanted it to show, and stimulated this by photo shoots, showing how it was done. It was quickly adopted by the American gays, making CK one of the first brands to breakthrough via the gay community. This trend was taken up by the straight consumer only years later, for instance with Joe Boxer (mainly by the black community) and only 25 years later with Björn Borg.

Adweek commented, in their feature “16 of the Gayest Ads in History From Ivory soap to Marky Mark”: “When Calvin Klein’s then-advertising vp Neil Kraft asked David Geffen to borrow Mark “Marky Mark” Wahlberg for an underwear shoot in 1992, he created one of the most iconic ads of the late 20th century - one that gay men immediately adopted as their own, even though Kraft wasn’t deliberately targeting them. The muscle-boy-in-his-drawers genre remains with us to this day, along with the question that still has no answer: Are these ads “gay” or not?”

"He won't admit publicly that it's homoerotic, but we can all see that it is," says David Mulryan, director of business development for Mulryan/Nash, a New York-based advertising agency that specializes in the gay market.

Interestingly, the trend to wear your underwear with the (branded!) band just sticking out of your jeans may well have started with Calvin Klein and his ads.