In spite of a catholic background, Belgium is a progressive country. It was the second in the world to legitimize same-sex weddings, in 2003. The language battle, which still rages (Dutch vs. French), distracts somewhat from other matters, but did not deter the Belgians to market themselves as hip and gay-friendly to the rest of the world.

Brussels is the capital of Belgium. In 2007, the Brussels public transport company set up a special network of night buses on Friday and Saturday nights (paid for by the Mobility Minister). Relevant billboards in the city were “gay minded”, and postcards with the same themes were distributed for a year. Motivation given: “gays have a substantial participation in Brussels nightlife.” Also, the minister wanted to increase the visibility of LGBT in the city.

The historic Grand Place is illuminated in rainbow colors during Pride.

Street art was facilitated to fight homophobia and sexual discrimination, like the massive work

Fun fact: a mural from a series by Frank Pé with a main character called Broussaille (the blond character on the right) and his girlfriend Catherine was painted in 1991 and then repainted in 1999 to make Catherine appear more feminine - many believed the mural depicted a gay couple, given the proximity of the mural to Brussel’s gay district.

Each year, there is a Belgian Pride Brussels, which is promoted solidly - especially on social media. but also via a special website, including fun merchandise.

Antwerp is Belgium's largest city, with over 500,000 people. After a hesitating start by issuing a gay map of the city in 2005 (within an overall attempt to make the city more ‘hip‘), and a visit to the IGLTA congress in Italy the next year (with a successful bid to host in 2007 – and again in 2010), the city of Antwerp decided in 2007 to have a more serious go at attracting LGBT tourists.

A delegation from Berlin was shown around (and Antwerp was included in the programme of an online LGBT tour operator), a gay cocktail party was organized and the ILGA came to have a look. Apart from clubs and kinky stores, Antwerp wanted to offer fashion, culture, diamonds and the Schelde river, said Karen Broeckaert of Visit Antwerpen. “The city does not have to turn pink, but we do want to show this niche market that Antwerp is vibrant, also as an LGBT city.”

ILGA was impressed by the old city, and liked the proximity of Brussels Airport, Bruges and even Amsterdam and Paris.

The 2007 EuroGames were hosted and in 2013 the World Outgames were held here, Antwerp participated in the ITB-fair in Berlin and issued a German-English guide ‘Gay friendly Flandern 2007’. The ‘pink map’ of the city was reprinted three times, with a total circulation of 50,000.

By 2013, the annual events Navigaytion and Antwerp Pride were well established, the club Red & Bleu had international acclaim and over 70 cafés, bars and clubs provide an array of entertainment, from vanilla to kinky, for the LGBT clientèle.

The 2013 Antwerp Gay Travel Guide on patroc.com seemed to focus more on history, culture and architecture, but also has an extensive listing of venues and activities. By 2019, this map no longer existed (only a Brussels version) 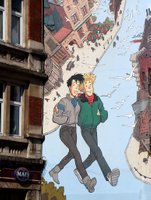 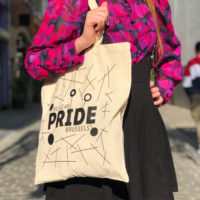