The earliest roots of this bank go back to Determeijer Weslingh & Zn. from 1765. A lot of mergers and some bankruptcies later, ABN AMRO came to be in 1991.

In the late 90s the bank was the largest foreign bank in the USA, after takeover of LaSalle National Bank, Talman Home and other banks. By 2006 it was the 15th bank in the world. The crisis of 2008 changed the whole landscape of world banks: in subsequent years ABN AMRO was nationalized, partly floated and is presently the 3rd largest bank in the Netherlands.

They are a partner of Workplace Pride.

The corporate website states: "We stand for diversity and inclusion.

We're strongly committed to a diverse and inclusive working environment, and have been for many years. Our Diversity & Inclusion programme is supported at all levels right across the bank. Its aim is to create a working environment that enables all of our LGBT+ colleagues to fully develop and apply their individual talents. Each business line has a Diversity Circle, a group of employees who regularly meet to discuss how to promote a diverse and inclusive atmosphere in their own business line. Diversity and inclusion are also taken into account when considering candidates for recruitment and promotion. The bank has a Gay Bankers Network, which holds regular get-togethers to share experiences and knowledge or simply to meet and chat informally. It also conducts surveys. Another survey will be held shortly to measure the progress ABN AMRO has made with regard to LGBT+ inclusivity." 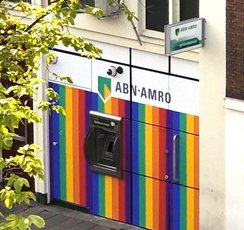 The first Pride campaign was run in 2018. During Pride Amsterdam week, ABN AMRO explicitly demonstrated their support for, and commitment to, their LGBT+ colleagues. Some of the offices in the centre of Amsterdam reflected this in various ways using the colours of the rainbow flag. You could also have yourself and your partner photographed on one of our special 'love' benches. A similar facility was available in the foyer of the bank's head office. For five days, an LGBT+ employee was interviewed in the "On the bench..."-series. The clips were posted on Instagram and Facebook to share their experience of working at ABN AMRO.

This year ABN AMRO highlighted diversity and inclusion during the Pride week, by proudly flying the rainbow flag on some of their buildings. It was a special flag, composed of selfies of people from the bank who were "all just as passionate as ABN AMRO is about conveying that everyone is allowed to be who they are – no exceptions".

The campaign was repeated in 2019, only the bench was placed outside the offices this time, and the three interviews were between two colleagues.

The bank wanted to make an unmistakeable statement about diversity and inclusion for Amsterdam Pride. The entrance to the main offices in Amsterdam was covered in rainbow colours and announced that they were "Proud to Support Equality", while the Dam Square and Leidseplein branch offices stood out for their windows being covered with colourful notes sporting statements by the employees about equality.

In 2015, the bank changed strategy with an accompanying pay-off: "What is your story?" They released a life-style ad, which depicts the moments in life where people are considering their (financial) options. One of these moments was a wedding, which in this case casually was with two grooms. In my eyes this is a perfect form of Marketing the Rainbow.

In 2018, they exhibited the Amsterdam Rainbow Dress in the lobby of their head office to mark International Coming Out Day. This work of art is made up of the flags of all the countries where homosexuality is illegal. The dress travels around the world to draw attention to this. In partnership with a number of other organisations, they organised a conference to coincide with the event.

In 2020 they also made a promotional clip, in which the bank wants you to change the world by making a difference. To come work for them, and join them in their corporate social responsibility. In the range of people that play a part in this story, we also see two happy gay fathers, exchanging a kiss. Matter-of-factly, just the way we like it.

Since the 2020 Pride celebrations were largely cancelled for pandemic reasons, alternatives had to be found. This clip from th UK shows interviews with 3 Allies about how they see LGBT+.

Although the most visible activities within Marketing the Rainbow seem to take place around Pride, the bank really makes an effort. The corporate policy has been clearly defined, and they are partnered with Workplace Pride. Other rainbow moments are the casual inclusion of same-sex partnerships in their corporate communicataions - which scores highly in my books, as well as attention for Coming Out Day.

ABN AMRO is doing a good job at Marketing the Rainbow. 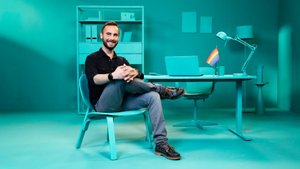 For this year's Pride the bank made a series of podcasts and videos about "Self-assured in the workplace". On Youtube we see Paula talking about gender identity, Allan about homosexuality, Eric about being polyamorous and Luca about being transgender. There were also podcasts with the full story, and an article about Álvaro “Open about your origin and your sexual orientation”.

In the Human Rights Report 2020, they write:
Over the years, we’ve created or signed on to several statements that demonstrate our commitment to diversity in the workplace, such as: