Marketing is mostly a commercial activity - even when performed for a non-profit cause - so what does Freedom of Speech have to do with that? As it happens, sometimes quite a lot - especially in the USA, where the constitution  guarantees both the freedom of religion and the freedom of speech (see also my article on Politics for some examples where politics, social issues and commercial aspects intermingle).

Two examples of how (perceived) constitutional freedoms can negatively influence your marketing efforts.

The downsides of Freedom of Speech 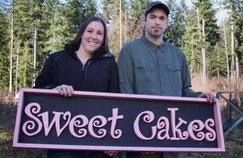 In February 2013 an Oregon baker turned away a lesbian couple who sought a cake for their forthcoming wedding. "Sweet Cakes by Melissa" bakery owner Aaron Klein admitted he denied a lesbian bride-to-be service after she visited his shop. The woman filed a complaint and reported that she had previously purchased a wedding cake from Sweet Cakes for her mother, and was only refused after she specified that this cake was for a same-sex wedding.

Klein, who owns the bakery with his wife Melissa, told NBC he was simply living in accordance with his religious beliefs by rejecting the lesbian couple's request. Furthermore, he believed his decision to deny the couple service was protected by his Constitutional right to practice his religion as he sees fit. "I believe that marriage is a religious institution ordained by God," Klein was quoted as saying. "A man should leave his mother and father and cling to his wife ... that to me is the beginning of marriage." 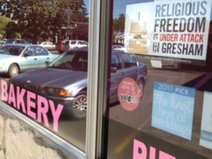 A somewhat strange vision of what marriage is, but luckily, he was not anti-gay: "I'll sell [gay people] stuff... I'll talk to them, it's fine"… While he denied the lesbian couple's charge that he referred to them as "abominations unto the Lord," he said he'd rather close down his business than "be forced to do something that violates my conscience."

Well, he has a clean conscience now: on September 2, 2013 it was reported that they had officially closed shop, leaving a note on the door that said: ”This fight is not over. We will continue to stand strong. Your religious freedom is becoming not free anymore. This is ridiculous that we can not practice our faith. The lord is good and we will continue to serve him with all our heart.” 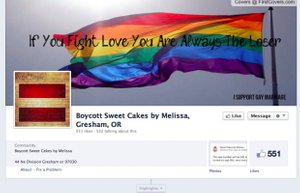 Next, the Kleins were convicted and fined $135,000 to be paid to the lesbian couple. Of course there was an uproar of indignant Christians, who pointed fingers and were outraged that not only were the religious beliefs of the couple denied (presented as yet another example of the “persecution of Christians” in the U.S.), but now they were even fined for having them. This, however, was not correct: the fine was handed down because the bakers had published the couple’s personal contact information - which led to death threats that nearly caused them to lose custody of their foster children. In other words, they had caused considerable emotional distress by bringing the case to the media’s attention and keeping it there by repeatedly appearing in public to make statements deriding the lesbian couple.  The Oregon Bureau of Labor agreed to the sum in July 2015. The Kleins paid the fine in December but it is being held while they appeal.

Christians are nothing if not compassionate with each other, so a fundraiser on Continue to Give raised a record amount of $420,000. The Kleins also hit the conservative speaking circuit to tell their tale of woe. Earlier, the Go Fund Me page that was set up for them was closed down by the website after raising $66,000, because they said "it was raising money for an illegal cause".

The Kleins closed their brick and mortar shop in 2013, but continued to offer their sweet cakes online. This business was terminated mid 2016. By October 2016 this was confirmed by a mention on their Facebook page.

Conservative press had a field day. The Strident Conservative wrote the blame is on “Gay Mafia thugs working on behalf of the LGBT radicals” who are “armed to the hilt, and stand ready to advance their pro-LGBT, anti-Christian, anti-American agenda.” The Gospel Herald called the bakery’s closure “persecution”. Fox Network’s Todd Starnes wrote, in an article titled, “Family bakery closes after left-wing bullies finally get their pound of cake”:  “The Kleins were literally run out of business by an anti-Christian mob. It’s hard to believe that something like this could happen in the land of the free, the home of the brave,” he continues with crocodile tears.

Note: TV-host Ellen met a  woman named Melissa in a JCPenney. She owns a bakery in Covina, California called Sweet Melissa Cakes. She was inundated with people criticizing her, having confused her bakery for the other one. Ellen set the record "straight" on her show, and gave this Melissa a check for $10,000.

In 2007, Oregon had passed one of the nation’s strongest LGBTQ non-discrimination laws. Basic Rights Oregon told GayStarNews: “The Sweet Cakes case really struck a chord with many Oregonians, because the business owners believed they had the right to deny services because of their religious beliefs. Oregonians know that our religious beliefs don’t entitle any of us to discriminate against others.” 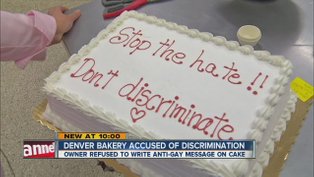 Interestingly, the reverse also (almost) happened in 2014: when Colorado bakery Azucar refused to make a cake that said "God hates gays" (but offered the materials for the customer to make that icing themselves), they were slapped with a religious discrimination complaint, filed with the Colorado Civil Rights division. The subsequent decision of the officials noted that the business owner was Catholic, and her refusal to complete the customer's requests was based on "derogatory language and imagery" rather than their religious nature.

Similar things happened in Northern Ireland recently. First, born-again Christian Ashers Bakery refused to bake a pro-gay-marriage themed cake. They were convicted of discrimination against a customer on the grounds of sexual orientation, which was confirmed in appeal. A difference with the American situation: the family-owned firm  was ordered to pay a mere £500 compensation to the local gay rights activist Gareth Lee. He had tried to buy a cake depicting the Sesame Street characters Bert and Ernie below the motto ‘Support gay marriage’ for an event to mark International Day Against Homophobia in 2014. 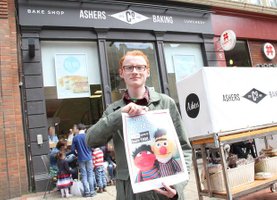 The court  rejected the argument of lawyers for Daniel McArthur and his family that the bakery would have been endorsing gay marriage equality by baking the cake. “The fact that a baker provides a cake for a particular team or portrays witches on a Halloween cake does not indicate any support for either,” the lord chief justice said. "The legislation on equality in the region could not be changed to suit one particular religious or political group." The defendent stated: “This ruling undermines democratic freedom, religious freedom and freedom of speech. This has never been about the customer. It has been about a message promoting a cause that contradicts the Bible.”

Ironically, the text on the window of the bakery states: "Come along inside, we'll see if tea and buns can make the world a better place." Perhaps they did not speak to everyone, saying that...

After the Isle of Man has finally approved same-sex marriage in July 2016 - and it being legalized in territories like the Pitcairn Islands and the British Antarctic Territory - Northern Ireland is the last region within the UK where same-sex marriage is not legal yet - discussions about it are pending as we speak. A legal challenge to Northern Ireland's ban on same-sex marriage is currently pending in the judiciary. Last year a majority of the Northern Irish Assembly voted in favour of equal marriage, only to be vetoed by Reverend Ian Paisley's Democratic Unionist Party (under powers handed to it via the peace process) for a fifth time. 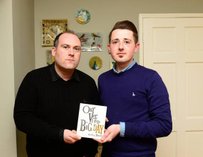 Around the same time, printer Beulah Print in Northern Ireland refused to make invitations for a gay couple’s civil partnership ceremony, citing religious beliefs. One of the 'grooms' had been doing business with the printers for four years before the refusal. A comfort from the printer: "We are not against homosexuals however, we do not support same sex marriage, which printing wedding invitations would do." A year later, the printer again refused to do business with  a gay couple, this time women, citing the same reasons. 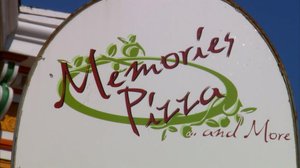 In Indiana, amidst political turmoil that supposedly served to protect religious freedom (RFRA = Restoration of Religious Freedom Act), but was actually aimed at discriminating LGBT (see my article on Politics), a small-town pizza shop said they agreed with Governor Pence and the signing of the RFRA. The O'Connor family (parents and 9 children), who owned Memories Pizza stated they have a right to believe in their religion and protect those ideals. “If a gay couple came in and wanted us to provide pizzas for their wedding, we would have to say no,” said Crystal O'Connor. “That lifestyle is something they choose. I choose to be heterosexual. They choose to be homosexual. Why should I be beat over the head to go along with something they choose?” said Kevin O'Connor. 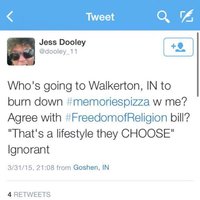 And immediately, the counter force of the “other side” was felt: the store was flooded by “threatening phone calls, and social media postings”. Their yelp page had 2 reviews before the incident, but 1,500 the day after, the large majority of which were negative. Yelp removed hundreds, but they kept flooding in. Also, the shop's Facebook page was exploding with similar critical comments, even after posts written this year were abruptly removed. The number of phone calls was so large that they (temporarily) closed shop, as they could not take orders anymore.

As an aside, some industrious activist promptly purchased the URL MemoriesPizza.com and populated the site with rainbows, phallic pizzas, and a request to "call us to cater your gay wedding." The website even featured a disclaimer: "No servers were hacked during the making of this website. If you own a business, buy a domain.” A day later, most content was removed, and only the notification “Don't discriminate. (It's not nice.)” remained. 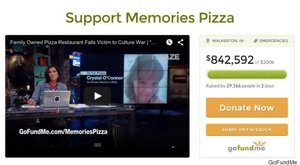 It did not take more than a day or two before a whole different aspect of the pizza family emerged. It seemed like they were on the verge of bankruptcy, and used the statement in media to get pity from their ‘community’. A fundraising campaign on Go Fund Me was started, by the team of Dana Loesch, a  conservative television host at TheBlaze (and author of Hands Off My Gun: Defeating the Plot to Disarm America - to show you in which corner she stands). The campaign raised over $850,000 in 3 days, funded by almost 30,000 supporters who wanted to “relieve the financial loss endured by the proprietors’ stand for faith.” This call for support was followed by “After you donate please go "like" and combat the leftist hatred expressed on Dana's page." It was the 2nd largest amount raised on GoFundMe, more than what was raised for disfigured Boston Marathon victims. 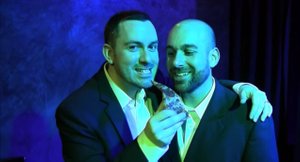 TMZ concludes: “Indiana's controversial law has raised a lot of questions, not the least of which is ... what gay wedding would hire a pizza place to cater?” In fact, as a joke, two grooms who were already married in their home state of Illionois, decided to renew their vows in Indiana. One of them belongs to a gay comedy troupe and he drove to the pizza parlor, ordered to pizzas and brought them to the ceremony - therewith making the pizza maker the unwitting caterer of a gay wedding. 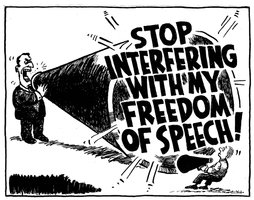 and the effects on (gay) marketing