To measure the difference in attitude between gays and straights, I presented a number of hobbies and interests, and asked them to rate these.

Conclusion: there are only a few differences between the two groups. Most notably are the higher interest in appearance by LGBT (75% found this to be important or very important, as opposed to 63% of the straights), less interest in pets (50% against 61%), a lower rating for children (30% vs. 37%) and a higher importance attached to friends (44% vs. 34% ranking this “very important”).

Next, I mentioned a number of material items or pastimes, and asked them to rate these.

Out of the 15 elements listed, only 3 give a difference between the two groups that is somewhat noticeable: LGBT seem to have lower interest in jewelry, more interest in home decoration and are less interested in the news. For the rest, the values do not differ much.

Conclusion: LGBT and heterosexuals attach the same value to 12 out of 15 values regarding “luxury pastimes”. In the other 3 categories, the difference is about 10% points, so not really shocking.

Regarding the ownership of more expensive objects, like a car, a house or motor bike, again few differences are visible. LGBT own homes and cars to a lower extent (resp. 59%-69% and 70%-82%), and are using iPhone more than heteros (32%-22%).

An explanation for the first two categories could be that it is more difficult for LGBT to obtain a mortgage (due to lack of ‘official dual income’), and that straight people need a car more for the transport of their children.

Next I wanted to know what the participants did in their spare time as to culture and relaxation. In the statistics, I made a difference between people with and without children - so I compared four groups.

Conclusion: in this field there are a few more differences to be observed, but these are not huge. The most notable differences were:

Gays (with our without kids) go to the opera more often

Gays with kids see more movies than straights with kids

As to ‘social activities’ (chatting, use of alcohol and tobacco, sports, internet, TV), there hardly is any difference at all - out of the 8 activities, seven do not differ significantly between the two groups, the only exception being that straights use a chat platform less often than gays. 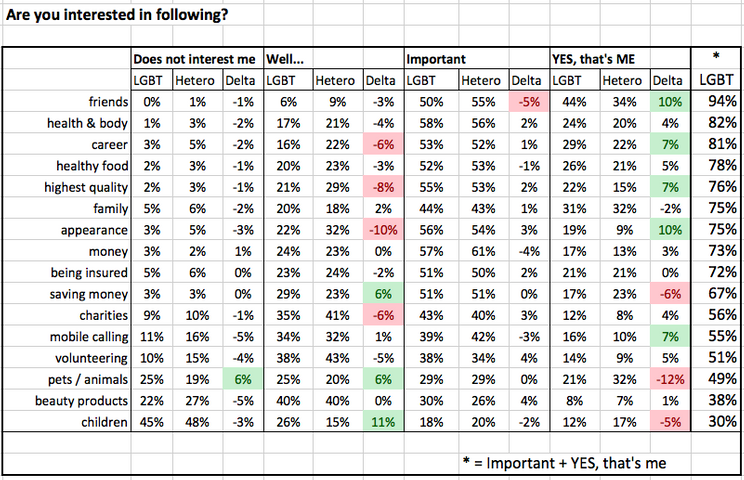 The red squares indicate a difference of more than 5% (the straight value being higher). 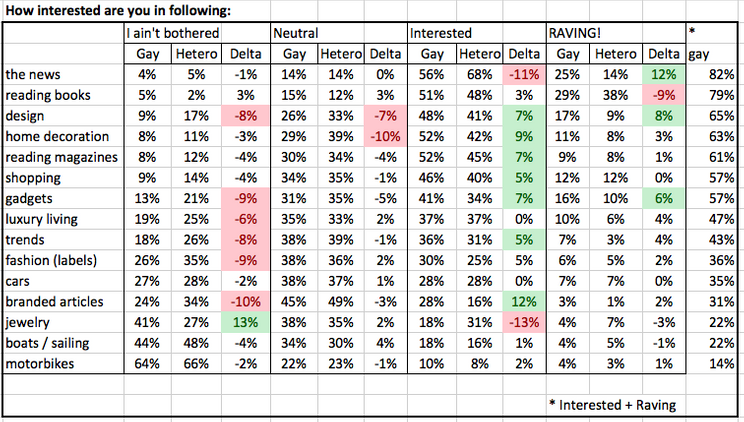