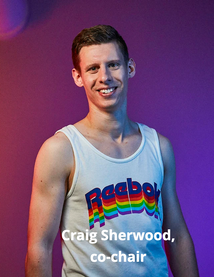 Reebok International Limited (est. 1958) is an Anglo-American footwear and clothing company that was a subsidiary of German sporting goods giant adidas since 2005.

On August 12, 2021, it was announced that Authentic Brands Group would be acquiring the brand for US$2.5 billion.

Reebok produces and distributes fitness, running and CrossFit sportswear including clothing and footwear. It is the official footwear and apparel sponsor for Ultimate Fighting Championship (UFC), CrossFit, and Spartan Race.

The company has an Employee Resource Group called Colorful Soles, for its LGBT+ employees. Matt Wyman, co-chair of Colorful Soles (Boston): “It’s not about making Reebok look good; it’s about making myself and others like me feel comfortable in this space.”

Parent company adidas has received a 100% score from the Human Rights Campaign. 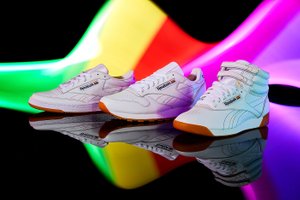 It took the brand a long time to join their fellow sports brands in releasing a Pride capsule. It was not until 2019 that they dropped a Pride Pack. It contained three classic silhouettes - the Club C, Classic Leather and Freestyle Hi - in a clean white colorway accompanied by rainbow-colored detailing. A rainbow Pride flag replaced the usual Reebok flag by the logo, as well as rainbow thread stitching throughout the sneakers. A portion of the proceeds from the pack was donated to Fenway Health, a Boston-based health center dedicated to improving the lives and wellbeing of the LGBTQ community.

From collaborations to general releases, Reebok put a lot of attention on their Spring/Summer ’20 collections in spite of COVID-19. For Pride Month the brand pivoted its attention over to vibrant, pastel colorways of some of their most classic silhouettes. The “All Types of Love” capsule and its accompanying “Proud Notes” campaign tells the story of LGBTQ+ community activists and influencers Twiggy, Dylan, Nali, Wazina, and June against the backdrop of commemorative apparel and footwear.

Before the real Marketing the Rainbow started, Reebok had some early material that could qualify as such. Their 2000 campaign was based on a spoof about survivor skills and two "fun" guys, Nate and Brian, who clumsily try to enjoy the great outdoors. Nate frequently offers bad advice and suggests that they stray from the hiking trail they're on. This brings them into awkward situations. Reebok using gay vague humor full of innuendo, mocking gays. Not once, but twice. It were old jokes, and not funny.

A year later, also on the back of Survivor, we saw "Defy Convention". Set to the music of Rossini's William Tell Overture, people do a host of things that "defy" normality. Amidst all the activity, the ad also includes two male American soldiers, passionately kissing while in uniform. One scene may include a transgender woman sitting on a copying machine. The tagline: "Defy Convention." In a different, edited version, the kiss disappeared...

The "All Types of Love" capsule of 2021 was produced in collaboration with the iconic House of Ninja. The line featured new footwear pieces and apparel that Reebok says were “inspired by inclusion, protest signs and the legacy of drag ballroom legends.”