Unilever owns over 400 brands and had a turnover in 2020 of 51 billion euros. The company has done some corporate and multi-brand campaigns for Marketing the Rainbow, but the individual brands also had their own campaigns. Here is a look at the ice cream brand Ben & Jerry's, one of a dozen Unilever brands with an annual turnover of more than 1 billion.

Also check out Magnum, Other Ice creams, food, and in non-food: Axe/Lynx, Dove, cosmetics and detergents.

B&J joined many other companies and signed the Amicus Brief to the Supreme Court in support of the equality movement. They commemorated the historic decision by renaming its iconic Chocolate Chip Cookie Dough ice cream: “I Dough, I Dough.” The special pint was available at participating scoop shops for a limited time. The sleeves could also be purchased online through the Human Rights Campaign with all proceeds benefiting the organization.

When the verdict was in they released this special celebration video. Ben & Jerry's was founded in 1978 in Vermont by Ben Cohen and Jerry Greenfield, two Jewish men who had been friends since their childhood. One of their mantras was "change-the-world-one-scoop-at-a-time". A blogger wrote they were "married to Activism, Ice Cream and Civil Rights." In 1989, Ben & Jerry’s was the first company in the state of Vermont to offer full benefits to same sex couples.

The company was sold in 2000 to Unilever, who agreed to carry on the company’s tradition of engaging "in critical, global economic and social missions". The website hosts a special section about LGBT+ Rights, where especially trans people are mentioned: "In the UK and elsewhere, our trans siblings in particular are facing discrimination, violence and sustained roll backs of their rights. Two in five trans people have had a hate crime committed against them in the last year, and two in five trans young people have attempted suicide. That's why we're proud to stand with the trans community and uplift their voices in the fight for equality." 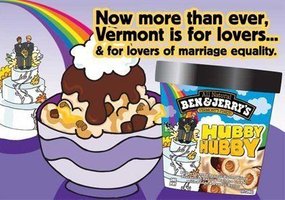 To show support for a new Vermont law legalizing gay marriage, they renamed the popular “Chubby Hubby” flavor. The new flavor, was produced in partnership with Freedom To Marry, was called “Hubby Hubby.” Bloggers noticed the successful use of social media to announce the news and spread it.

Ample attention was given to celebrating "50 years Stonewall" during WorldPride in New York. Their website still tells the story.

As part of their Pride series B&J profiled a series of trans activists working in the UK: Nim Ralph, Asifa Lahore, Octavian Starr and Cara English. 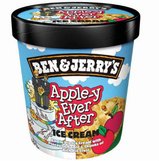 On March 13, 2012, Ben & Jerry's announced it would be changing the name of "Oh! My! Apple Pie!" to "Apple-y Ever After" in the UK in support of equal marriage rights for same-sex couples.  The tubs featured a gay couple atop a wedding cake decorated with rainbows.

In 2013 Ben & Jerry’s (in fact, co-founder Jerry himself) announced they were excited to be joining hands with their friends at Marriage Equality to show our support for everyone’s right to marry the one they love in Ireland! For the occasion, they symbolically re-named Mint Chocolate Chunk to EngageMint Party.

"Everyone deserves the right to say "I Do". That's why Ben & Jerry's are encouraging Australians to say "I DOugh" by making marriage equality a consideration in their vote this federal election. We're proud to support Australian Marriage Equality in their efforts to bring about equality in Australia."

In anticipation of the referendum, attention was already paid to the theme in 2012, for example in the video Love Who You Love: An Australian Couple Shares Their Story. In 2013 they released I Dough, I Dough. They also paid attention to this in 2016 in a video with employees sharing their experience.

With Valentine's Day just around the corner, B&J released Hooked on You (previously known as Phish Food). They dedicated this special edition to "people in love in all flavors", to celebrate love, but also to draw attention to the acceptance and tolerance of all kinds of love.

"It can be scary to admit you're hooked on someone. But we know that this can be even more difficult for people who don't meet the 'standard', said Laura van Geel, Ben & Jerry's Social Mission Manager. That is why part of the proceeds of this pint will go to COC projects to encourage young people to be proud of themselves and to love those they love.

The launch was part of the ice cream brand's three-year All Flavors campaign, with which the company spoke out for a Netherlands with 'all flavors of people'. 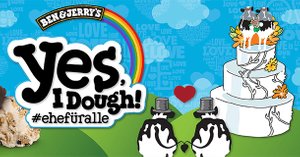 In support of same-sex marriage in Germany, another flavor change was realized. "We are of the opinion that all lovers, regardless of gender, should have the right to get married. We want to support those who stand up for marriage for all and thus for equality, freedom and justice. That's why Cookie Dough is now Yes, I Dough." The name-change was only virtual though, but the message came across.

In 2012 Polish artist, Julita Wójcik created a giant rainbow, made of 16,000 artificial flowers, 9 metres tall and 26 metres wide. It was a symbol of pure joy, placed at Plac Zbawiciela, highlighting the Polish presidency in the EU, the opening of Euro 2012 and the Pride Parade. It was subsequently destroyed seven times by nationalists and opponents of LGBT rights, and eventually removed in 2015.

In 2018 Ben & Jerry's created an "unbreakable" water-light rainbow hologram in Poland. The rainbow was the same size of the original 2012 floral installation.

“Thanks to the courage of our client Ben & Jerry’s we hope that Poland will become even a little more tolerant. Because it’s high time for that,” added Mikołaj Sadowski, chief creative officer at the creative agency, 180heartbeats + Jung v Matt.

From marriage equality to climate action… Ben & Jerry’s has a huge community which they work with to pursue social and environmental initiatives. Digital Marketing Manager Jay Tandan shares his top tips on how to do it.

In 2016 they celebrated "12 Years of the International Day Against Homophobia".

Back in 1989 they were the first major employer in Vermont to offer health insurance to domestic partners of employees, including same sex couples, and their website still states: "we haven’t spent one minute regretting it". Here are a few other ways Ben & Jerry’s has supported Marriage Equality over the years:

2001: Support for the Employment Non-Discrimination Act

Subsequently, all over the world campaigns were done in support of same-sex marriage.

A special section on their website is dedicated to LGBT+ rights.

In collaboration with Wattpad, "The world's most positive platform for brands to engage Gen Z" they launched the first-ever branded write-a-thon to engage the LGBT+ community, asking them to “Pen Your Pride” in celebration of Pride Month. The community was challenged to raise funds for a great cause, just by doing what they love…writing! They were asked to write a story about when they felt proud to be a member or an ally of the LGBT+ community. Users were to tag their stories with #WattPride, for which the platform committed to donating $1 to ILGA for each tagged story, with the goal of generating 10,000 stories. Wattpad mobilized 8 influencers and ambassadors to share the campaign outside the community and reach allies. The campaign generated 591,000 engagements globally, 541,339 total reads, and 27,531 comments. There were 17,551 tagged #WattPride stories, which exceeded the story submission goal by over 170%, and the campaign resulted in a 4.6pt increase in brand favorability (from 93% to 98%).

The idiosyncratic character of this brand has been visible in all products and marketing communications since its foundation. They could have just remained 'fun', but have consciously chosen to stand up for minorities and social discrepancies from the beginning. For about 25 years, the brand has been very visible as an advocate of the rainbow community, including in the political arena – an area shunned by most brands. They do this consistently and with relevant use of their products and product names as a medium. The collaboration with various charities completes the picture: they score a perfect 10! 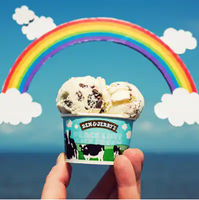 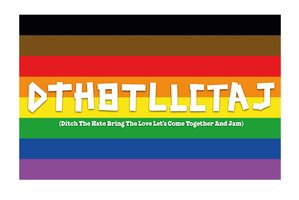 In the run-up to the London Pride parade 2019, in partnership with QTPOC (queer and trans people of color) activists and performers, B&J hosted the very first DTHBTLLCTAJ* events at their Soho Scoop Shop. "We came together to celebrate pride with drag, music, comedy – and of course, – ice cream. Grab a spoon and dig into these euphoric pics!"

*ditch the hate, bring the love, let’s come together and jam!