Subaru is the automobile manufacturing division of Japanese transportation conglomerate Fuji Heavy Industries, the twenty-second biggest automaker by production worldwide in 2012. Subaru is the Japanese name for the Pleiades star cluster M45, or "The Seven Sisters" (one of whom tradition says is invisible - hence only six stars in the Subaru logo), which in turn inspires the logo and alludes to the companies that merged to create FHI.

Subaru was one of the first car brands, if not major mainstream labels, to target the LGBT customer, more specifically: the "L". 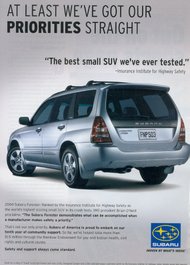 How do you advertise a car that journalists describe as “sturdy, if drab”? That was the question faced by Subaru of America executives in the 1990s. When the company’s marketers went searching for people willing to pay a premium for all-wheel drive, they identified four core groups who were responsible for half of the company’s American sales: teachers and educators, health-care professionals, IT professionals, and outdoorsy types. Then they discovered a fifth: lesbians. “When we did the research, we found pockets of the country like Northampton, Massachusetts, and Portland, Oregon, where the head of the household would be a single person - and often a woman,” says Tim Bennett, who was the company’s director of advertising at the time. When marketers talked to these customers, they realized these women buying Subarus were lesbian.

In the ‘90s, gay-friendly advertising was largely limited to the fashion and alcohol industries. Pop culture had also yet to embrace the LGBT cause. Mainstream movies and TV shows with gay characters - like Will & Grace - were still a couple of years away, and few celebrities were openly gay. When Ellen Degeneres became a rare exception in 1997, and her character in the show Ellen came out as gay in an episode of the sitcom, many companies pulled their ads.

Although it was easier to get senior management on board with making ads for hikers than for lesbians, the company went ahead with the campaign anyway. It was such an unusual decision -and such a success - that it helped push gay and lesbian advertising from the fringes to the mainstream. People joke about lesbians’ affinity for Subarus, but what’s often forgotten is that Subaru actively decided to cultivate its image as a car for lesbians. 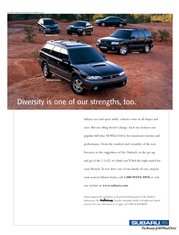 In 2002 Navratilova partnered with marketing firm Do Tell to launch the gay affinity charge card, Rainbow Card. Subaru was the first sponsor, followed by British Airways.

Subara is one of the few marketers to do its own research into the gay market, by which they found that lesbians love Subarus. So it entered the market in 1996 and remains one of the few major companies to target gay women, as well as one with gay-specific market ads.

Inside Subaru of America, though, not everyone was united on the effort. There was public backlash, and Bennett says the campaign survived only because their team really cared about the project and had the support of a cohort of straight allies in the company. 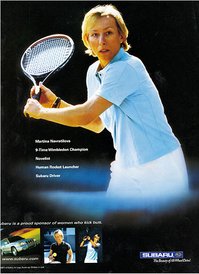 International tennis legend Navratilova was embraced by Subaru of America after the company began courting the lesbian market in 1996. A TV campaign features Martina among other female athletes in the "What Do I Know?" theme. The spot includes golfers Juli Inkster, Meg Mallon and Olympic skier Diann Roffe-Steinrotter. Each asks, "What do I know" about performance, control, grip, etc. Martina gets the last word in, asking "What do we know? We're just girls."

Tim Bennett wanted to dispel a few notions. "Everyone assumes it's a lesbian campaign because it's her and they thought those other women were too. But Martina doesn't want to be positioned as a lesbian. She just wants automakers to speak to women in an intelligent way, something else few others do even today."

Having said that, it is remarkable how Subaru moved to the lesbian drivers more and more, with puns and word play that could only be construed as "targeting the L." 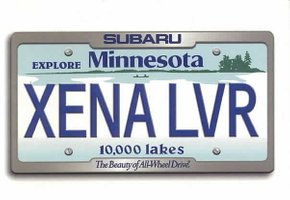 For the first ads they hired women to portray lesbian couples. But the ads didn’t get good reactions from lesbian audiences. What worked were winks and nudges. For instance: the company's print ads featured Subaru models sporting license plates with phrases like "XENA LVR," a play on the popularity among lesbians of the show "Xena, Warrior Princess," and "P-TOWN," a reference to Provincetown, the popular tourist destination for lesbians and gay men. The ads were also featured on billboards and bus shelters.

The model B9 Tribeca was advertised with the slogan “Room for Seven. Or Whatever You're Into”. Campaigns included a number of risqué, double-entendre phrases, such as "Open bed!", "Takes all your toys!", “Tie-down hooks!", "Non-stop action!" "Firm grip!", and "Wanna take a ride?". References were made to Diversity and "It's Not a Choice. It's the Way We're Built". One plays a joke on the way the driver would dress for a different occasion. There also was a commercial depicting both a gay male and a gay female couple, with the text "Beauty meets Power" and "Sophisticated meets Sensible". While many gay and lesbian consumers loved the shoutouts in the license plates, straight people would only notice features like a "bike rack". 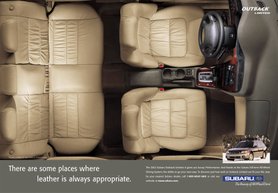 Even though the brand is mostly associated with gay women, a number of ads were made to target gay men (without showing people, male or female), sometimes with a coy reference to sexual position: "Try Me... I'm Versatile!". The tagline even says, "Nice package" - which is more a gay reference than a lesbian one. Another ad described the characteristics of a one-night-stand ("even takes you out for breakast"), or is that about "falling in  love"...?

Subaru Forester is regarded as the lesbian car of choice. "We are proud to be gay," says a spokesman for Subaru US. "And since 1995 we have marketed actively in the gay community. Then it was a relatively uncluttered. Now lots of manufacturers have joined [in the hunt for gay buyers]."

Bennett said the campaign was an extension of the company's niche marketing strategy, which targets groups as far-ranging as IT professionals, 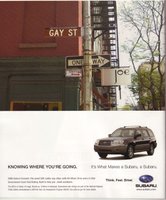 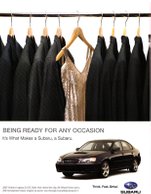 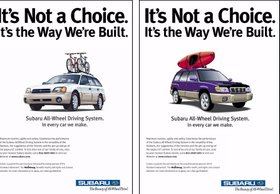 nurses and alpine skiing enthusiasts. “People buy anddrive our cars as an extension of their lifestyle,” Bennett said. “With our brand we have a really educated and diverse audience, so this is a perfect fit for us.”

Navratilova's iconic status as a lesbian was successfully used by Subaru to attract lesbian customers. Her only regret is that it didn't happen while she was still playing*. “If I had been quiet about it, I would have had ads long before this,” she said. “It is a fact.” In an interview with The New York Times, she said, "All most other advertisers could see was the fact I'm a lesbian. Subaru doesn't care. They see me as everything I am." 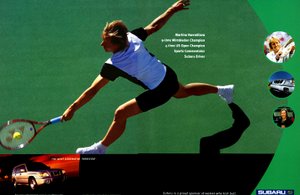 At the same time, Subaru used actor Judge Reinhold and cycling superstar Lance Armstrong to address other market segments. All in all, they managed to pass Volkswagen, Mazda, BMW and Lexus in sales.

They also became a sponsor of the Showtime series The “L” Word, and set up The Subaru Annual Rainbow Leadership Awards, introduced in 1996, by Martina Navratilova, Nancy Becker and Pam Derderian. The award is “to serve, as a meaningful way to further their commitment to help fund causes of importance to the lesbian and gay community”. 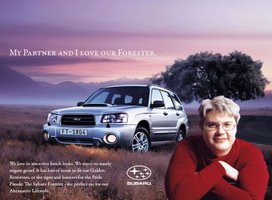 In a 2009 survey (of 3,685 respondents) by Gaywheels.com and Sorgenfrei, Subaru was the overwhelming favorite (chosen by 45% of respondents, with Volkswagen and Ford a distant second and third) as the most gay-friendly car company. But that alone apparently doesn't sell cars: Toyota (which had 12.8% of the overall car market in 2008) is the most frequently owned brand among people taking the survey.

The picture on the left was a parody, made on the waves of L-marketing.

* Martina Navratilova came out as a lesbian in the early 80s (having just changed her Czech citizenship for an American one), but only after the height of her career did she become involved in (LGBT) marketing. Even though she won more tournaments than any other player in history, male or female, most companies were afraid of being endorsed by an open lesbian. She did have brief appearances for Apple Computer, LA Eyeworks and The New York Times and pitched for Prince racquets.

In the same year, MTV Networks' Logo and Subaru ran a six-month brand campaign that played on the notion of creating a legacy for oneself. The Logo Legacy Campaign featured 3-minute video interviews with gay and lesbian entertainers, artists and entrepreneurs, each of which will expound on how they broke into their particular field and how the notion of “legacy” informs their work.

The campaign coincided with the launch of the fifth-generation 2010 Subaru Legacy sedan. Throughout the six-month run, Logo intended to drive viewers to the Legacy site by way of heavy on-air promo rotation. 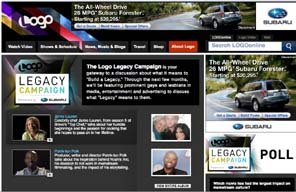 Subaru partnered with Logo since the network launched to 13 million subscribers in June 2005, and was one of the first marketers to create custom commercial content for the startup.