Pepsi, and the other brands belonging to the Pepsico group, were among the first major fmcg brands to use

Marketing the Rainbow. Here is a review of bubly.

See my article on Pepsi for that particular brand, and also SodaStream, Gatorade and Doritos for other Pepsico brands.

In 2020 they brought us Drag For All Flavors in support of LGBT+ elders during the holidays. They donated $25,000 to SAGE, a US nonprofit dedicated to assisting this community. Two LGBT+ seniors appear in a dazzling music video alongside 11 drag performers. 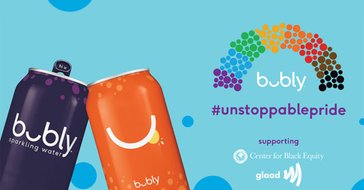 While the celebration of 2021 Pride looked and felt very different, more than ever it became important to remember that Pride itself is unstoppable. To unite people across the country and embrace the intersectionality of the LGBTQ+ community, bubly, with the help of Golin New York, Golin Chicago, The Brooklyn Brothers and Team Pixel, hosted the first-ever #UnstoppablePride Parade. A number of influencers joined the project, including Todrick Hall, Terrell and Jarrius Nhieguys, KingKevar, Mark Kanemura, Uly & Ernesto, Noa Taieb, and Mycah Angelou.

Consumers could join the parade by simply filming and sharing their best parade strut using the hashtag #UnstoppablePride. Each submission was added to the virtual parade on bubly’s Unstoppable Pride microsite and supported the brand’s commitment to GLAAD and The Center for Black Equity. In just under two weeks’ time, the team generated nearly 50 earned media placements with 100% positive/neutral sentiment, more than 505 million impressions, 49 pieces of influencer content with 1 million engagements, 11.6K consumer usages of a bubly brand effect on TikTok, and over 100 struts for the final parade video.

In 2022 they launched the Coming Home campaign to celebrate Pride Month.

"We find a way because we find each other. We’re partnering with the Stonewall Inn Gives Back Initiative to support LGBT+ chosen families and the safe spaces where they form and flourish."

“Coming Home,” stars musician Naomi McPherson as Jac, a nonbinary individual who initially expresses trepidation when entering an LGBT+ bar but is quickly welcomed. The content is accompanied by a new song from McPherson’s band Muna and features cameos from LGBT+ talent. Actress Kimia Behpoornia, drag artist Eureka O’Hara and actor Brandon Flynn are also featured in the campaign. 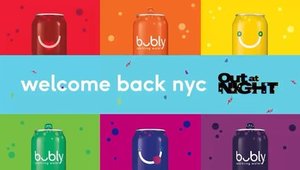 In 2021 they presented the Out at Night campaign to celebrate a return to relative normalcy after the pandemic.

"oh hey NYC! @bublywater is here to help celebrate the highly anticipated return to nightlife by partnering with the local reuniters and innovators leading the charge as we come together as a community once again. take a twirl with us under the disco ball with bubly Out at Night."

They donated $15,000 to support @henriettahudson (one of 15 lesbian bars left in the country) to further support queer celebratory spaces in New York City. 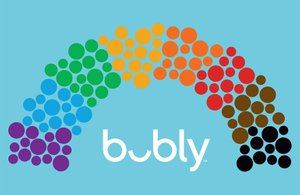 Bubly (est. 2018) debuted on a float at World Pride in New York City in 2019 and they wanted a fun, inclusive headline for their campaign during Pride 2019. Melissa Rosen wrote their "Love for all flavors" tagline which they used throughout Pride month and on their float at the NYC Pride Parade. Bubly also gave us an All For Love Pride Pack in support of The Stonewall Community Foundation.

Flamboyant gay artist Todrick Hall was hired to join them in their celebrations, and on the float (as well as on his socials). 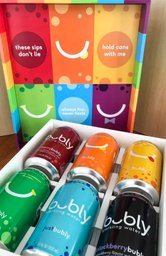 "So excited to be celebrating pride with Bubly! We are out here slaying NYC Pride!! Love comes in all flavors and we’re living our best lives on this float! Come #crackasmile and join us as we share the love! Happy Pride! #loveforall #pride #ad"

Todrick also made a large set of gifs for bubly.

The brand is fun, relevant, colorful and works together with many LGBT+ charities. There is also a campaign outside the Pride season, so it does not get much better than that. Bubly scores a 9.5.

As a sponsor of RuPaul's Drag Race, Bubly released a video with three of RPDR's queens: Manila Luzon, Latrice Royale and Vanjie Mateo.