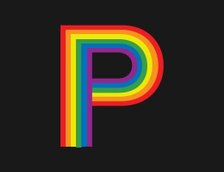 The start of Pride activities

Converse has 5 employee networks, collectively known as the Converse United. Next to the Pride platform, they have Diversity, Veterans, Abilities and Women.

The first Pride collection dropped in 2015 as it was born out of its LGBT+ employee network, and has since evolved into an annual range.

Converse has donated more than $1 million in support of local and global LGBT+ organizations. The Nike group scores a perfect 100 on HRC's Corporate Index and they are a National Corporate Partner.

Converse released a lineup of eye-catching rainbow-injected silhouettes to celebrate Pride Month, with sequins, rainbows, platforms and more. Marking its five-anniversary, the Converse Pride 2020 Collection was inspired by the “More Color, More Pride”* flag that was first introduced in 2017 by social justice advocate Amber Hikes.

The collection is comprised of nine different models. The Converse Chuck Taylor All-Stars and Converse Chuck 70 feature canvas uppers dressed in rainbow flags in addition to elaborate sequined variants. Rainbow motifs also follow through onto the outsole, midsole, and All-Star badge and some models.

The brand took its proud designs a step further by allowing sneaker fans to customize the pairs to also include the bisexual, transgender, non-binary and pan-sexual flags through its Converse By You customization platform.

Four major LGBT charities were chosen to benefit from the Pride Collection: It Gets Better, Ali Forney Center, BAGLY and OUT MetroWest.

In 2019, the collection debuted sneakers inspired by the Trans flag, with pink and blue styles. For the campaign, they tapped six individuals who are connected to the LGBT+ community in different ways: Desmond Is Amazing, Kristin Beck, Alexis Sablone, Felix, Ayishat Akanbi and Fran Tirado. These six faces and voices were at the center of the new “All The Stories Are True” campaign that aims to show the power of expressing one’s true self.

The Chuck 70 sneakers came in four colorways: gray, silver and blue glitter, white and black glitter, all with accents and designs that pay homage to the riots. 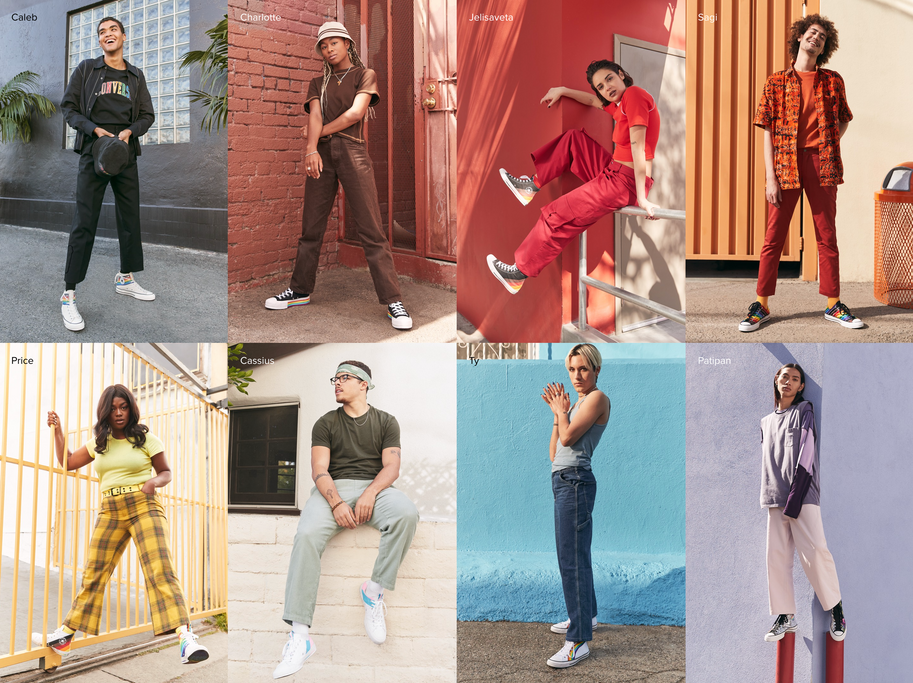 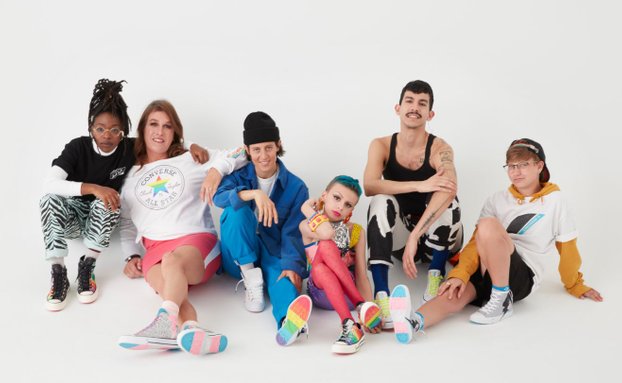 Designed by Miley Cyrus, the 2018 line featured footwear and companion apparel. All net proceeds supported community partners, such as Cyrus’ own Happy Hippie Foundation as well as youth groups like It Gets Better Project, Minus 18 and RainbowYouth.

“I’ve always identified with Converse because the brand appeals to and represents so many different cultures and walks of life. And they’re accessible,” said Cyrus. Miley had worked with them earlier that year for the Converse x Miley Cyrus collection.

In a statement from Converse, the sportswear brand said the collection is “a small contribution for those that have paved the way and continue to advocate for people of all ages to be their true selves today.”

Converse also asked members and friends of the LGBTQ community to submit messages that represent pride in five words or less. Select phrases were then animated into posters by Converse and community artists.

The Chuck Taylor All Star Pride 2017 Collection celebrated sexual diversity with a ‘70s inspired rainbow flag themed pack, bursting with energy. Consisting of seven rainbow flag themed colourways across the high and low editions of the brand’s classic All Star model, the pack aims to express awareness and support to the LGBQT community, giving the shoe a bold and bright makeover with colour-splashed rainbow gradient uppers, multicoloured laces, embroidery, and ‘70s inspired patches across the various colourway options.

Proceeds from each of the models will go to It Gets Better and Miley Cyrus' Happy Hippie Foundation, to positively inspire the lives of LGBT+ youth around the world.

The 2016 Pride Collection consisted of three colorful new Chuck Taylor All Star sneakers "designed to be worn at pride parades, concerts, jubilations and beyond". The company said "the collection serves as a passionate reminder for universal tolerance, diversity and equality — encouraging the creative community to be their most authentic selves." Special features included a premium woven upper in vibrant rainbow colors, along with a rainbow license plate and aglets. The collection will be available in both woven canvas and an all-over rainbow splattered canvas design and boldly showed Converse’s support of the global Pride movement. The official hashtag was #ReadyForMore.

Out.com reported: "This Pride is going to be a battle of the brands. With its Proud To Be collection, Converse has now joined the ranks of Nike and Adidas in offering special Pride-themed footwear. In addition to the classic rainbow flag colors, Converse has created special Chuck Taylor All-Stars to celebrate two hubs of LGBT life and history: San Francisco and New York."

As of 2019, Converse sold products through 109 company-owned retail stores in the United States and 63 stores in international markets. Converse employees are counted among the 76,700 employees of Nike Inc. worldwide. Converse have to date made an appearance in over 650 films, appearing in movies such as Back to the Future, I, Robot, Grease and Stand by Me.

Converse (Nike) have a perfect score on HRC's Index, and have an LGBT employee platform. They have paid attention to the LGBT community for a number of years now through fun and remarkable product lines, and have donated to charities. I just miss their attention for the LGBT outside the Pride season. 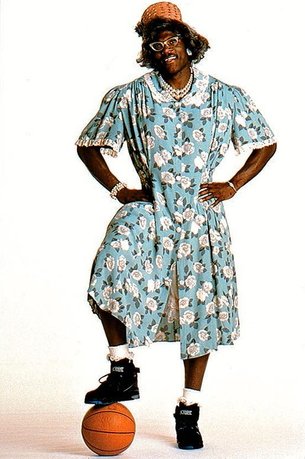 As early as 1991, Converse had 'LGBT-themed' commercials. Basketball star Larry Johnson of the Charlotte Hornets (later the NY Knicks) appeared in the spot Grandmama: Aeroglide as his own Grandmother. The character was inspired by Ella Fitzgerald. The agency chose “Grandmama” instead of something more conventional and forgettable like “Grandma” - and it was a hit! The campaign gained so much popularity that it ran for a few years, with various instalments.

The coincidentally gay/trans-friendly tagline was: "It's what's inside that counts."

Building on the success, the Charlotte Hornets held a night in Johnson’s honor during his rookie season. Twenty-four thousand fans received Grandmama masks when they entered the Charlotte Coliseum. At the height of the campaign during the early 1990s, Grandmama was a full-fledged national phenomenon. Johnson won many awards as a player, yet you’d hear more fans and sports anchors refer to him as Grandmama than by his given name, or the also popular "LJ". In 1993, 'she' even guest-starred on an episode of Family Matters.

In 1993 they brought us Hairdrier Revised, where "Grandmama" appears in a beauty shop, getting hair and nails done. The same year we saw "Beads". In 1994 she went to the Super Bowl with a parody of the Wizard of Oz, called "3 Points Land". One Super Bowl commercial may be insignificant to the likes of Nike, Coca-Cola or Budweiser, but the purchase of a $900,000 spot on America’s most-watched telecast was a landmark step for Converse. Only the popularity of the Grandmama campaign and the growth of Converse’s basketball business persuaded the company to take such a risk.

A number of others followed, until 1996. They can be seen on my YouTube channel.

AdRespect: "While the campaign started off as the same old Tootsie/Mrs. Doubtfire joke of man dressed as a woman, it later took on gay sensibilities including the play on "Wizard of Oz." These ads are a classic example of the old-fashioned joke of a straight-man-in-women's-clothes. In the American nomenclature, a man wears women's clothes usually for two reasons: as a joke or if he's gay. This commercial is "safe" because we know from real life that Johnson isn't gay and that he's dressing up for fun in the commercial."

Tereza, Ty, and Xandro – who were `"tapped to work alongside Converse designers from concept to production”. The collection featured new designs of the Chuck 70, Chuck Taylor All Star and Run Star Hike shoes as well as two t-shirts and a tank top and a new pair of sliders.

They also created a new “All Star” patch, inspired by the Pride, Bisexual, Pansexual, Lesbian, Non-binary, Trans, and Unity Flags. Plus there’s a custom Pride section on the website where you can design your own shoes, choosing from flowery to space designs and rainbow soles to laces.

Converse continued its partnership with the same four charities as the year before. Since releasing its first Pride collection in 2015, Converse has donated more than $1.3 million in support of local and global LGBT+ organisations.

But before the first Pride collection dropped, Converse participated in the (RED) initiative in 2006. An observer wrote: "To think that the humble sneaker can make such a massive difference to people’s lives just seems downright ridiculous, but Converse have taken a massive step in raising awareness and global funds to fight AIDS, Tuberculosis and Malaria with their (RED) line of sneakers. A portion of sales from each (PRODUCT) RED product goes directly to the global fund to invest in African AIDS projects.

Early 2008 Converse launched “Converse 1HUND(RED) Artists” to support Converse (PRODUCT) RED." This was also to commemorate the brand's 100th anniversary celebration. Converse unveiled a total of 100 designs. Artists from all over the world were enlisted and given the opportunity to use their creative power to design their Converse product. All shoes had one iconic red lace loop. 10% of the net wholesale price of the shoes goes towards the Global Fund to Fight AIDS, Tuberculosis and Malaria.

Of course, neither AIDS, nor Tuberculosis or Malaria are solely the problem of the LGBT community, but the damage done by especially the former cannot be denied.

Converse is an American shoe company that designs, distributes, and licenses footwear, apparel, and accessories. Founded in 1908, it has been a subsidiary of Nike since 2003. For over a half century the company dominated the American athletic shoe market. From the 1970s, the company lost its dominant position as competitors presented their own styles. Today the company's portfolio includes products under the Converse, Cons, Chuck Taylor All-Star ("Chucks"), Jack Purcell, One Star, and Star Chevron trademarks.

Their shoes are distinguished by a number of features, including the company's star insignia, the All Star's rubber sole, smooth rounded toe, and wrap-around strip. Converse frequently collaborates on special edition product releases with other brands such as John Varvatos, Carhartt, Comme des Garçons and Campbell's Soup.

The ad agency of Converse said: “The reality is the shoes weren’t as good as what other brands were making. The quality of their commercials were often better than the quality of the shoes." Unable to compete with its competitors, Converse declared bankruptcy in 2001 and was bought out by Nike two years later. Converse has since evolved from an athletic shoe brand into one that specializes in casual footwear.