Buying power – also known as disposable personal income (DPI) -- is a practical and widely understood tool for economists and marketers that helps measure the visible impact on the economy. It is not the same as wealth, but simply the share of our wallets that we spend on the goods and services we need and desire. DPI, according to economists, is the amount of money that individuals have available to spend and save after paying taxes and pension contributions to the government. By measuring buying power we get a clearer glimpse of how diverse population including LGBT households and individuals demonstrate their influence and reach through their spending habits. 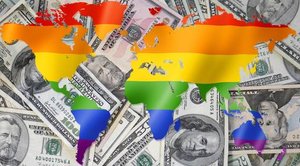 The myth of higher income

One of the most important assumptions is that gays make more money than heteros. In my own consumer survey among 3,000 participants I asked what the net income per month was, and that of the partner. When looking at the household income, the income brackets are almost the same for the two groups, but a gay household is less likely to have two incomes. The only significant difference is in the “more than EUR 3,000” bracket, where more gays are ranked (47% against 41%) – but this may also be due to the fact that more straights preferred not to answer this question.

Note: this question raised some problems, as I got the feedback that Americans for some reason do not really know what their net income per month is. Yet, close to 2,000 people answered this question.

My conclusion: the assumption that LGBT make more money does not hold true. But there is more scientific proof. 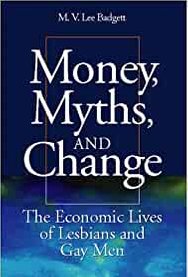 Already back in 1991 Lee Badgett debunked some of the myths of gay affluence. After taking the differences in characteristics into account, lesbians’ income ranges from 10% below to 39% above heterosexual women’s earnings. G/B men, however, earned 17% less than heterosexual men with the same education, age, race, location, and occupation. She adds: "Some gay marketers are more defensive and even secretive about their use or statistics, carelessly promoting an unsupportable stereotype about the entire population of L/G. For instance, Overlooked Opinions (now defunct) would not discuss in detail the derivation of its claim that the gay market is worth USD 514 billion, other than to say they used “the Kinsey estimate” (now hardly used anymore) of the L/G population plus 'other data'." 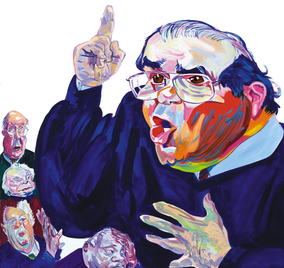 The downside of the myth

The over-estimation of the gay financial power has further, far-reaching consequences. This ‘mistake’ found its way into the courts in crucial civil rights challenges such as the Colorado Amendment 2 case that went before the U.S. Supreme Court. In this case, Supreme Court Justice Antonin Scalia cited misused market research statistics on gay and lesbian people when he wrote that "high disposable income" gave gay people "disproportionate political power," and that Colorado voters should be permitted to rein in that power by banning anti-discrimination protections for lesbian, gay and bisexual residents. Scalia's dissenting opinion in the Colorado Amendment 2 case was joined by Chief Justice William Rehnquist and Justice Clarence Thomas. ”Coincidentally”, these were the same three dissenting judges in the landmark 2015 DOMA case (United States v. Windsor) that legalized same-sexe marriage in the USA. 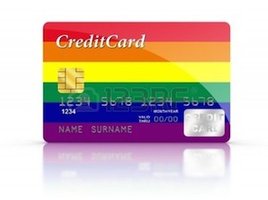 Blowing up the buying power

Note: this is excluding the purchasing power of friends and families of LGBT individuals, the ally community. We see significant evidence that market behaviors are favorably shaped by millennials who appear to be the most LGBT-inclusive generation yet. This might also be called the “PFLAG effect”*.

The US figures that have been thrown around come from parties such as Overlooked Opinions, Out Now and Rivendell, gay (owned) organizations who benefit from a figure that is as high as possible. Not all of these parties are able to relate the figures to the circumstances, for instance the specific characteristics of the group researched. Some rougly take a 10% of the population (long ago corrected to some 5%), the higher income that they dreamed up, and they do not account for young people and pensioners.

Others, like Witeck Communications, know how to place these figures in perspective. In this light, the LGBT purchasing power in the US has been defined as USD 340 billion in 1999, via USD 641 billion in 2006 to USD 987 billion in 2017. 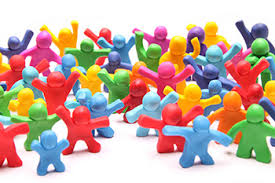 The consumption of the LGBT consumer segment is described above. On ther other hand there is the production of LGBT businesses. In 2017, the National Gay & Lesbian Chamber of Commerce (NGLCC) reported that the typical LGBT business has been in operation, on average, for more than 12 years and that LGBT businesses contribute more than $1.7 trillion to the U.S. economy, having created more than 33,000 jobs. As such, they are a factor to be reckoned with. Moreover, many organisations and companies (according to the chamber’s press release “over a third of the Fortune 500, many top federal agencies, states, major urban municipalities and the public utilities commissions”) have a diversity policy, which dictates making use of the services of minorities such as LGBT. The NGLCC strongly recommends the ‘community’ to get certified, so as not to miss out on the opportunity to be included in these revenues.

Note: in a recent study, Badgett finds that homophobia and transphobia can cost 1% or more of a country’s GDP. Another aspect of the economic impact of the LGBT community. “The economic case works,” Badgett says. “In the U.S. we’ve seen it help us move toward marriage equality. The ability to marry was good for the economic well-being of LGBT families, and also brought new opportunities to local businesses."

However, the myth of lesbian and gay affluence obscures the problem of poverty in the LGBT community. According to a study by the Dublin-based Combat Poverty Agency, 21% of Irish lesbians and gay men lived in poverty compared to 10% of the general population. The same study found above average levels of homelessness and early school leaving. The study concluded that the root of these depressing figures was discrimination.

UCLA’s Williams Institute found that gay Americans are more likely to grow up homeless, live an impoverished adult life, and require assistance in receiving necessities like food. Their report found that 29% of LGBT adults experienced food insecurity. In contrast, 16% of Americans nationwide reported being food insecure. Another American study that showed gay men have a poverty rate of 20.5% compared to 15.3% for straight men. 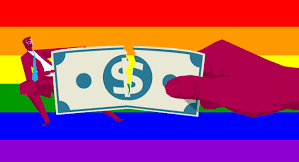 As long as policy makers believe that lesbians and gay men are better off than the heterosexual majority it will be impossible to turn their attention to the way in which sexuality discrimination causes economic disadvantage. The idea that homosexuals are wealthy, privileged and not in need of discrimination protections has become a key rhetorical device of the American religious right.

The assumption of higher affluence has been negated time and again by writers and researchers, while on the other hand parties repeat that statement all over again, mostly because of a vested interest.

Badgett adds: "Compared with older stereotypes of lesbians and gay men – as child molesters, mentally ill, and narcissistic – the myths of affluence and conspicuous consumption underlying the gay marketing craze seem relatively benign." Benign or not – a myth is a myth, and in Marketing you should not use myths.

Conclusion: the gay affluence is a myth, statistics are not used properly, and even though discretionary income may be relatively higher due to the absence of children, many LGBT will NOT be wealthy.

Thanks to Bob Witeck for his additional information. 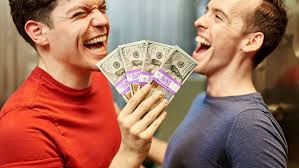 Even a renowned source as the New York Times contributed to this myth, by inflating the figure of government spending in support of gay rights groups and causes globally over the period 2012-2015 from $ 7 million to a whopping $ 700 million – without quoting any sources. “This is not merely a discrepancy. The difference between 7 million and 700 million is the difference between reality and myth.”

Yet, the figure is out there, and was used by opponents of LGBT equality – such as the conservative Family Research Council – as a reliable source, thus supporting the myth, and harming the cause. 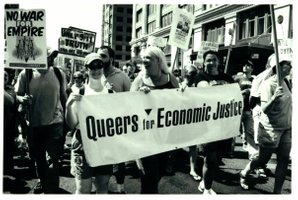 The American National Gay and Lesbian Task Force (NGLTF) stated that a report in the May 2000 issue of "Demography" on income levels among same-sex partners further refuted the myth of "gay affluence", which they called “a misconception that has been used to stereotype and discriminate against gay, lesbian, bisexual and transgender people. Stereotypes portraying our communities as only rich are distorted. While the myth of affluence helps our communities gain the attention of powerful corporations, the real dangers lie in how the myths skew the political priorities of the movement and hurt our ability to advocate on issues of economic justice."

Bob Witeck attributed the increase in buying power in part to the growing number of people who identify themselves as LGBT. "We have seen evidence from researchers that gay men may earn slightly less than their heterosexual counterparts. The best available Census data on same-sex couples supports the understanding, however, that gay populations tend to be somewhat more concentrated in major metro areas, and less likely to live in rural, under populated areas -- a characteristic generally associated with higher than average income. We also see that same-sex couples are less likely than their married heterosexual counterparts to have kids, and they are more likely to have both partners in the workforce, factors which yield higher per capita household income, especially in the case of gay male couples.”

Witeck also emphasized that, “Buying power is not the same as wealth. In fact, there is no evidence that same-sex households or LGBT people are more affluent or, on average, earn more than others. Economists confirm that is a stereotype, as academic research strongly suggests that gay men appear likely to earn slightly less than their heterosexual counterparts, for instance and that LGBT populations of color particularly face many job and earnings barriers.” Witeck specifically cited the work of the UCLA School of Law’s Williams Center and the Selig Center for Economic Growth..

The wealth and spending power of LGBT became a serious issue in the early 1990s when gay publishers began courting advertisers with readers' surveys that revealed an untapped niche market. US Market research companies like Simmons Market Research and Overlooked Opinions found that gays and lesbians earn almost twice as much as the American average, are three times more likely to be college graduates and are four times more likely to travel overseas. Australian research company Significant Others (Out Now) made similar claims.

In the hype no one questioned the representativeness of readers' surveys. It's easy for many heterosexuals to believe in the pink dollar because what they usually just notice in the gay community is fewer children and a more exuberant lifestyle – while they do not notice the kind of workplace discrimination that can create financial disadvantage.

The myth of gay affluence