One of the key issues of my thesis was the assumption by many companies – including LGBT research and consulting companies – that the gay consumer is different from the straight one.

Building on this perception of being different, my question read:

How could a "gay consumer" be different from other consumers?

In 7 categories, the LGBT answers are 5-19 percentage points higher than their straight peers, in 3 categories this is the reverse. This is remarkable, because in the rest of the survey these differences occur less, and are often much smaller.

So, when asked from a neutral perspective (without going into the matter more deeply), LGBT feel significantly stronger about almost half of the listed “possible differences between gay and straight consumers”.

Highest ranking differences were “Different needs and wishes” and “Interested in different products and services” – both rank 19 percentage points higher in the gay population (at 47%-28% and 42%-23% respectively). These are both abstracts – more concretely: LGBT consider themselves much more likely to have a higher disposable income (42% against 27%) and a different spending pattern (32%-21%)

They also say they have a different holiday pattern (26% against 21%), which is less recognized by heteros. This is an important aspect, that comes back below.

Finally, LGBT think they are more likely to be trendsetters than straights. See for more details below. 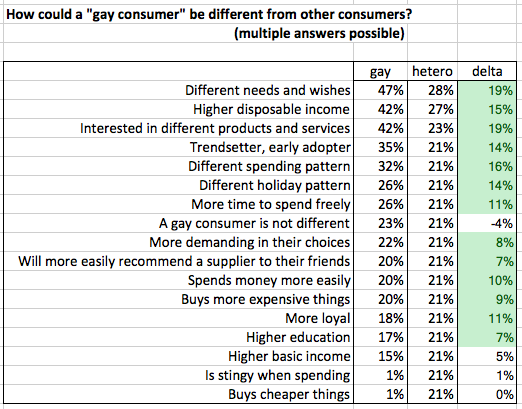