You would think that a brand as large and diverse as Unilever, with a large segment of body care products, would have a long and broad history in caring for the gay male customer.

Only in 1998 we saw the first gay ad in the UK, by Unilever’s Impulse: a young woman walks down the street, drops her shopping and a good-looking young man stops to help her. They flirt a little, hands touching as they pick up an apple. She thought she could be in - but then a second man, who was with the first from the beginning, signaled for the first man to come with him.

For anyone who didn't pick up on the fact that the men are in fact a couple, the ad then flashes to a series of images - two other men in leathers lean together, there's a rainbow flag and a dog wearing a leather outfit, and Quentin Crisp even makes a brief cameo appearance. Apparently she didn't realize she was in the gay Village in New york, the girl suddenly becoming a sort of Dorothy from the Wizard of Oz - everybody laughs.

Remarkably enough, the Lesbian & Gay Foundation considered it controversial and it was later ranked among the Top 10 Most Controversial Gay Advert.

The tagline is 'Men can't help acting on Impulse,' which does seem to imply that it would only take the right body spray to 'turn' a gay guy straight. It could be read that the guy is bisexual and therefore does find the woman attractive, but so much effort is put into reinforcing the fact that this happens in a gay area that the 'joke' just wouldn't pay off if he was bi. That said, it's quite a fun advert, which got a lot of airtime and few complaints. No kiss though. 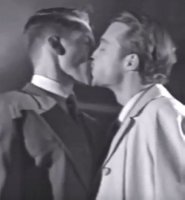 Another Unilever brand, Lynx (in most markets known as Axe) sort of revolutionized the macho Australian market late 2014, when they showed a gay kiss in a commercial. Having been criticized (and even banned) before in the UK for objectifying women, Lynx chose a more inclusive approach in their latest advert, where one segment of the 1 minute commercial says “kiss the hottest girl or the hottest boy” (both kisses being performed by the same man).  The moment is fleeting, but definitely there.

A few years earlier, a spot for Lynx showed Ben Affleck looking pleasantly pleased - not perturbed - that he got attention from women ánd men.

In 2007 Unilever launched a Sunsilk campaign called Hairapy, building on the gay stereotype of fussy hairdressers. The promotion was aimed at women though, tapping into the anxiety that many women feel on a ‘bad hair day’. The resulting "Hairapy" program centered on a Sex and the City-inspired promotion with gay male characters showing up in ads and on the streets to help women get through their various hair traumas. The Hairapy guys offered their version of tough love to women in need of honest feedback about their problem hair, creating a snarky tone that jibed nicely with the personality of the brand.

Openly gay comedian Mario Cantone became the voice of Hairapy in TV ads in which he doled out blunt criticism to women with flat or frizzy hair. The campaign generated 240 million impressions and distributed more than 1.15 million gift cards, allowing Sunsilk to exceed its market share goals in the launch's first month.

Canadian tea brand Red Rose (est. 1894) released a cute commercial in 2017, featuring two lesbians visiting one of the parents. Remarkably, the feedback was predominantly positive. The YouYube channel was quite likely strictly moderated so there are no trolls giving their comments, but the like:dislike ratio was almosts 10:1, so that can be taken as a overall positive sign.