This UK retailer was very late to the rainbow game. It was not until 2014 that we see anything happening, and it did not start in a positive way. 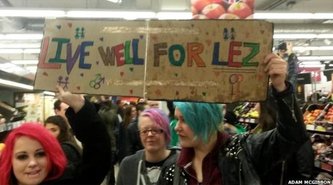 In Brighton, two women were asked to leave the store for kissing - a mere peck on the cheek - after "a customer complained." A protest was organized by the university's students' union, which urged the supermarket giant to review its policy on equality and diversity. About 200 people gathered outside the store before some of them turned to kiss each other, saying they wanted to "turn the negative into the positive" and highlight equality in the city.  Sainsbury’s slogan “Live well for less” was changed into “Live well for lez”. The company later apologized and offered to donate £100 to a charity, stating the couple "were not behaving inappropriately and we are very sorry that they were treated in this way". They added: "Had a senior manager been made aware of the original customer complaint, they would have followed our guidelines and no action would have been taken." 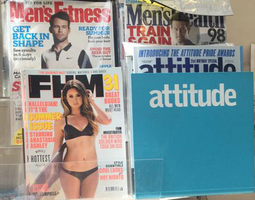 The next year they made the press again. They were criticized for placing a copy of gay lifestyle magazine Attitude magazine behind a so called modesty cover, whilst making no effort to conceal FHM. The FHM cover in question featureda bikini-clad woman, everyone on the cover of August’s Attitude magazine (their Pride Heroes edition) was fully clothed. When asked for a comment, the company blamed the distributor: “They agreed that whilst the cover of this magazine is now generally suitable for display, there could be future issues where it may not be. This is something we regularly review along with taking guidance from the Professional Publishers Association.” They added that the FHM issue was 'accidentally' placed on a low shelf. Pointing fingers, however, is not very becoming. 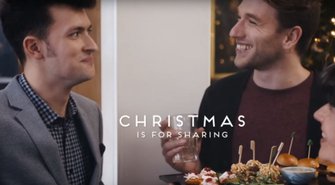 They seemed to be making amends in their 2015 Christmas commercial, called “The Pact”, in which a gay couple arrange to visit both families over Christmas: lunch with one family and dinner with the other - they agree to eat only the mains at each to ensure they do not overeat. Of course they find that this is practically impossible.

It won praise from viewers for its casual inclusiveness and LGBT friendly approach: “No massive statements, just a refreshing normality”. 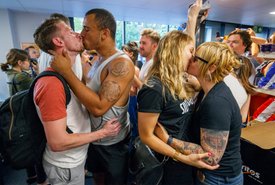 However, things went haywire again mid 2016, when a security guard at a Sainsbury’s location in London told a gay couple, who were holding hands, they were “touching inappropriately”, after a customer had complained about their displays of affection. Again, a 'customer driven' action...

This led to a reaction the next day, when hundreds of people staged a mass ‘kissathon’ protest waving rainbow flags at the store. Despite more than one member of the public shouting at the group to “get off my street”, the protesters continued, dancing to Diana Ross and Donna Summer tunes. A spokesperson for Sainsbury’s, which laid on biscuits and water for the protesters, said: “It’s been a really great event and an important opportunity for the community to show their support. We do our best to make sure everyone feels welcome in our stores but occasionally we make mistakes. We are working hard to make sure lessons are learnt.” 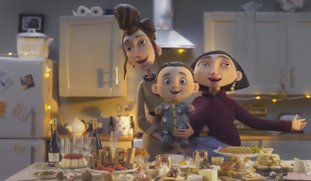 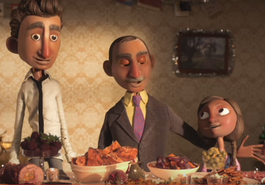 In 2016, they went back to their ‘all inclusive’ stance, this time with a 3.30 minute stop-motion animation: The Greatest Gift. While the 2015 ad was ‘all about’ the gay couple, the 2016 one featured Dave, sung by James Corden, who wants to be able to spend more time with his family. The ad - only fleetingly - shows a number of diverse families, including Dave’s own wife of ethnic background. We also see a lesbian couple with a child, and what is either a gay couple with a kid, or a three-generations family. Of course, more ethnicity is added.

Head of Broadcast Comms at Sainsbury’s Sarah Kilmartin said: “We wanted to reflect a modern Britain and a diverse Britain.”

Apparently Sainsbury's Britain is only inclusive and diverse around Christmas.