The very beginning was in 1965, when California winemaker Davis Bynum first created Barefoot Bynum Burgundy in his garage. The winehouse was established in 1986 in California, and has been a member of the E & J Gallo family since 2005. The Barefoot Cellars produces 17 unique varietals and blends. Their slogan is "Get Barefoot and Have a Great Time!" They have shown all kinds of support to the LGBT over the years. Winemaker Jennifer Wall allegedly is the world’s most awarded winemaker: all in all, her wines have received over 2,000 medals.

Their website has a special LGBT section, which says: "A proud LGBTQ+ ally since 1988, Barefoot believes in accepting everyone exactly as they are. Discover how your purchase supports LGBTQ+ communities around the world and #MarchOnward with us!" In that year they began their support for the Golden Gate Business Association.

Later collaborations include InterPride, OutServe-SLDN, GLAAD, World Pride and being the Official Sponsor of World of Wonder, working with RuPaul’s Drag Race Queens to celebrate the LGBTQ+ community.

Their webshop offers a range of rainbow products, from a Rainbow sparkle wearable flag and t-shirts, to pins, fans and fanny packs. 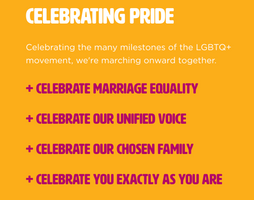 Barefoot Wine & Bubbly has been supporting marriage rights for gays for 25 years, donating to local LGBT centers and other organizations, investing in Pride Week events, even putting up a 20-foot-tall inflatable wedding cake in front of San Francisco's City Hall to show support for gay marriage - and a similar cake in Amsterdam during Europride 2016.

"We definitely love to celebrate the LGBT community and all of its progress," says Jerime Black, Barefoot's national LGBT sales and marketing manager. "Barefoot really is all about fun. It's taking the stuffiness out of wine."

Barefoot publicly congratulated the state of New York after allowing same-sex marriage in 2011. Up until then, they had proudly supported LGBT causes nationally, donating to and participating in hundreds of fundraisers, driven by Randy Arnold, Barefoot National Sales Manager since 1988.

Since 2010 they have scored a perfect 100 on the Human Rights Campaign's Equality Index.

For a number of years, the brand sponsored or participated in Pride celebrations. 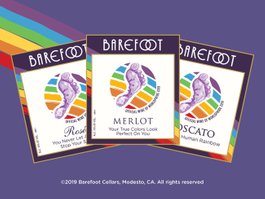 That year, they brought back an earlier campaign, the "Barefoot Bestie Labels" program, which allowed wine lovers to customize Barefoot wine labels. You could choose from three varietals – Moscato, Rosé or Merlot – to customize your own special rainbow-decorated labels. For every "Barefoot Bestie Label" ordered, Barefoot donated $1 to Broadway Cares/Equity Fights AIDS. This campaign was also run the year before, with donations going to Outfest, the leading organization in promoting equality by creating, sharing, and protecting LGBTQ stories on the screen.

In spite of the cancelled 2020 Pride celebrations around the world, Barefoot released a series of specially labelled bottles and cans with bubbles, with donations to several organizations. Free Mom Hugs, a "group of affirming parents and allies who love the LGBT+ community unconditionally", was supported by donating $1 in proceeds from every case of the PRIDE 2020 Barefoot Brut Rose and Rose Spritzer.