Adidas AG, stylized as ɑdidɑs since 1949, is a German multinational corporation, that designs and manufactures shoes, clothing and accessories. It is the largest sportswear manufacturer in Europe, and the second largest in the world, after Nike.

The company was started by Adolf "Adi" Dassler in his mother's house; he was joined by his elder brother Rudolf in 1924. In 1949, following a breakdown in the relationship between the brothers, Adolf created Adidas, and Rudolf established Puma, which became Adidas' business rival. An urban myth has promulgated the acronym as All Day I Dream About Sports.

The three stripes are Adidas' identity mark, having being used on the company's clothing and shoe designs as a marketing aid. The branding, which Adidas bought in 1952 from Finnish sports company Karhu Sports for the equivalent of 1,600 euros and two bottles of whiskey, became so successful that Dassler described Adidas as "The three stripes company".

Gia Goodrich, a gay woman of colour was behind Adidas’ 2019 Pride campaign. “I believe in the adage, ‘Nothing about us without us,'” said Goodrich. “It’s important to work with creators who are a part of the communities they’re representing. Our industry is dominated by white, cis, hetero dudes telling the stories, our stories. The fact that adidas made a conscious effort to hire someone who is a part of and vocal advocate for the LGBT+ community is impactful”.

The 2019 pack featured pride-themed redesigns of four of their most popular trainers: the Continental 80, the UltraBOOST 19, the Adilette and Nizzas.  Adidas’ 2019 Pride Pack features rainbow-themed footwear, from trainers to slides.

Adidas recruited celebrities such as David Beckham, Rita Ora and Naomi Campbell to design their own take on the samba trainer for an Albert Kennedy Trust auction. This charity works to help and protect homeless LGBT+ youth.

David Beckham told Adidas at the time: “I have a young family and I want them to grow up in a world where they are given a chance, where they are part of that diversity and equality – things that are changing over the years.”

Rita Ora, who is bisexual, said that she designed one of the pairs of trainers because she thinks people should “have the freedom to be in love with whoever you damn well please.”

In 2014, one day after announcing Olympic bronze medal-winning diver Tom Daley as the face of a new campaign, it emerged that Adidas blocked the word “gay” from its customisable trainers bought online, as well as the words “lesbian”, “bisexual”, “trans”, and “homophobia”, next to actual offensive words such as “faggot”.

Adidas allowed users to customize various models of its trainer before purchasing, using an online system (miadidas). This system filtered certain words, and there was a “disallowed” list which included i.a. "gay" and "lesbian". The company came under fire from LGBT+ people but said at the time that they were forced to ban the words from their trainers as “a restrictive measure that unfortunately prevents both genuine and disruptive users from experiencing the miadidas offer.” They said it was a reflection of “the sad reality of the society we live in.” One month later, Adidas backtracked and allowed gay and lesbian to be printed on the customisable shoes, whereas “bisexual”, “bi”, “trans”, and “homophobia” were still a no-go.

Nike iD, an equivalent service offered by Nike allowed users to write the words “gay” and “lesbian”, but blocks words such as “faggot”. NB The word “bisexual” was blocked by Nike iD, because there was a six-character limit on words for Nike iD.

Two weeks earlier, Coca-Cola was faced with a similar controversy, and pulled the plug on a ‘virtual coke’ website after a row erupted over the site filtering the word “gay”. 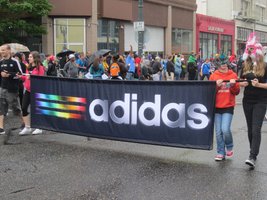 The first hint re. Marketing the Rainbow was a 1999 black and white commercial, featuring either a drag queen or a transgender person.

They also supported charities with those collections, and started to participate in Pride parades.

adidas Originals geared up to celebrate LGBT Pride Month around the world with the release of their first Pride Pack. Taking the brand’s most iconic silhouettes, they doused each one in a measured melange of bright colors, drawing inspiration from the rainbow flag. Underlining its efforts, adidas partnered with Portland advocacy group New Avenues for Youth and the Portland Monthly‘s “Flare” LGBT event, to which a portion of the sales from the Pride Pack were donated.

"At adidas, we believe love unites. Pride 2020 is about all the acts of love that bolster the LGBTQ+ community, especially in challenging times. We wish to combat the historic erasure that Black, Indigenous, and People of Color (BIPOC) have faced, both within the LGBTQ+ movement and beyond. Alongside our partners, Athlete Ally and Stonewall, we are committed to amplifying BIPOC LGBTQ+ voices in our work together.

This Pride month, we’re teaming up with athletes and advocates in the queer community, partner organizations and others to share real stories of inspiration, solidarity, and self-expression.

We’re connecting in new ways, through video calls and FaceTime photoshoots, transcending boundaries both literal and figurative to bring together our adidas athletes and allies across the world.

The #LoveUnites conversation is where we’ll share stories of Pride from all corners of the LGBTQ+ community, to highlight the diversity of identities and voices that love unites

The 2020 collection featured eight pairs of shoes, in line with what we've seen in the previous years, with a mix classic and modern sneakers.

Each celebrated the vibrancy of the LGBT Community which embraces diversity. On the surface, each pair features a White and Black theme, however it goes deeper. Each model displays various shades of the rainbow flag. The Superstar and EQT Support ADV were decorated with various polka dots.

For Pride Month 2016, adidas Originals unveiled a new collection of footwear that paid homage to the LGBT community. Two iconic silhouettes, the Superstar and Stan Smith, were reimagined with paint splash graphics representing the rainbow flag. The colorful detailing extended to the insoles. There also were matching tops and pants. Proceeds from sales benefited partner Stonewall,